A Pickleball Set is Coming to Aldi

One summer day in 1965, Joel Pritchard and his friend Bill Bell returned to Pritchard’s summer home on Bainbridge Island, Washington, near Seattle, after a game of golf and found their families bored with “nothing to do.”  Pritchard, who was serving in the Washington House of Representatives and would later go on to serve as a U.S. congressman and as Washington’s lieutenant governor, collaborated with his friend Bell and another friend, Barney McCallum, to improvise a game that was a combination of ping-pong, tennis, and badminton. And so the game of pickleball was born.

The story goes that Pritchard’s summer home property had a badminton court but no badminton equipment, so they used whatever they could find, including ping-pong paddles and a perforated plastic ball. They made some adjustments to the net height over time, and they also noticed that the plastic ball — like a Wiffle ball — bounced nicely on the asphalt surface. The three friends created a set of pickleball rules that closely follow badminton rules.

Pritchard’s wife, Joan, named the game pickleball after the “pickle boat” in rowing or crew races. The pickle boat is composed of leftover or non-starter oarsmen from other boats. The Pritchard family later had a dog named Pickles, who was apparently named for the game, although sometimes the legend mistakenly goes that the game was named for the dog.

Pickleball remains a popular sport to this day for several reasons. One, it’s a social game played on a court the same size as a badminton court, so players stand closer together and can talk with each other as opposed to tennis where the court is larger. Two, it’s a low-impact game that is easier to play than tennis, making it easy for beginners or people who aren’t very athletic to pick up.

You might find pickleball courts at community centers or fitness clubs. Or, this summer, Aldi is selling a pickleball set. 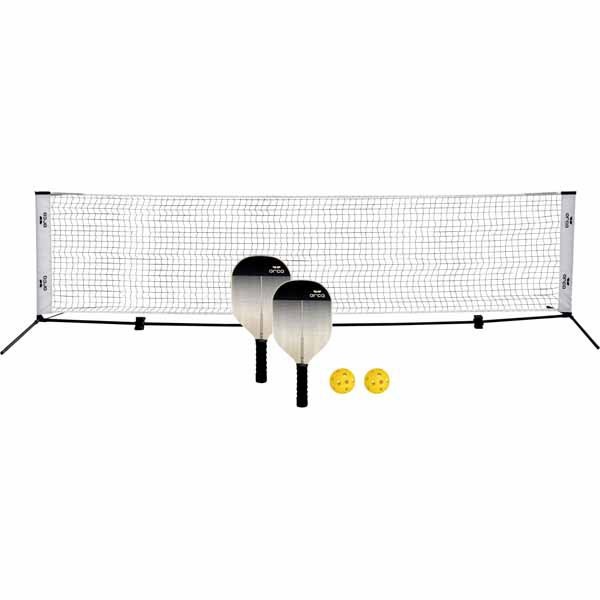 The Orca Paddle Co. EZ Set Up Pickleball Set (Product Code: 707073) cost $49.99 at the time of publication. This looks to be a good deal considering that a net alone easily costs at least $50, and often more, on Amazon, and this Aldi set includes a net, paddles, and balls.

This is an Aldi Find, so stores will only get one shipment of these pickleball sets, and after that shipment sells out, they’re gone unless Aldi decides to bring them back next year. Aldi does not offer online ordering for products that aren’t in stock at your local store.

Orca Paddle Co. is not an Aldi-exclusive brand. Orca-branded pickleball gear is also sold at Walmart and on Amazon.

Here is more about the set from Aldi:

We haven’t tried this pickleball set, so we don’t know how easily it sets up, how well it works, or how durable it is. We write open threads so readers can share about their experiences with products and ask questions.

Do you own the Orca Paddle Co. EZ Set Up Pickleball Set? Tell us what you think of it in the comments below.