In most places in the United States, it gets hot in the summer. That means keeping cool is a top priority for most homes. There’s no question that air conditioning is the most effective way to cool a household — central air is best, followed by portable air — but air conditioning can be expensive to install, run, and repair. For that reason, some people look to fans, which don’t cool the air but do help make things a little more comfortable.

An old but popular approach to cooling off is a combination of air and water. If you’ve ever been to an amusement park, for example, you’ve probably seen those giant misting fans that kids love to stand under. Or maybe, if your air conditioner has gone out, you’ve splashed yourself with water before sitting in front of a box fan.

Evaporative air coolers basically use air alongside either water or ice or both. A fan blows over the ice and / or water, then sends the cooler, humidified air out. They’re mostly designed as portable devices, but in some parts of the country, you can buy whole house air coolers.

It’s important to remember that these devices do have limits. They’re not as effective at cooling the air as an air conditioner. More importantly, they work best in low humidity areas where the air is dry; in high-humidity areas, they can make the air feel more muggy and be more of a negative than a positive. 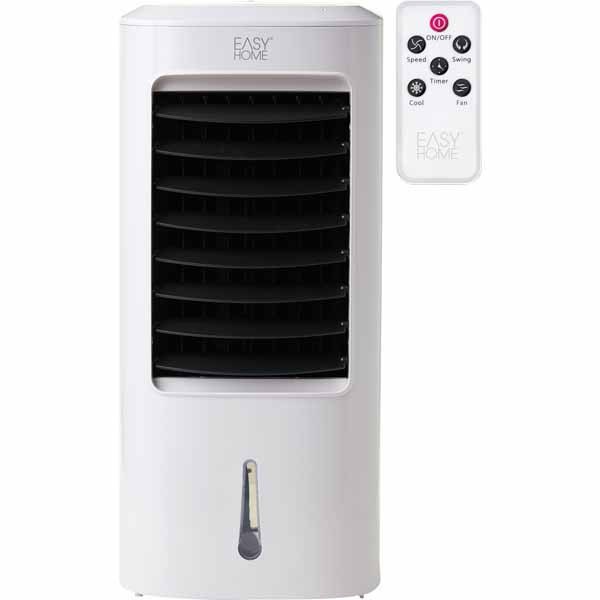 The Easy Home Evaporative Air Cooler (Product Code: 806165) is an Aldi Find, which means it’s only in stores for a short time. Once it’s gone, it’s gone. We’ve never seen Aldi sell this product before, so 2021 appears to be the debut year for this cooler.

The cooler also comes with a 3-year warranty, serviced by Medion. Medion is a subsidiary of Chinese electronics company Lenovo and a brand we’ve seen among the Aldi finds.

According to Aldi, features include

Since this is the first time Aldi has sold this product, we don’t know how well it works or how long it lasts. We also don’t know who manufactures it.

Do you have experience with this evaporative air cooler? Let us know in the comments.