EDITOR’S NOTE: Updated May 2019 with a 1-year progress report.

If you haven’t figured it out by now, Aldi loves camping supplies. Its spring Special Buy (ALDI Find) lineup is full of camping housing and camping accessories.

We used an LED camping lantern from Aldi for a few years, until we accidentally dropped it during a camping expedition. This spring, we needed a new option for lighting up the darkness, which led us to this duo: 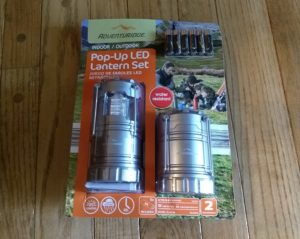 The Adventuridge Pop-Up LED Lantern Set retails for $9.99. It comes with identical two pop-up lanterns. The package also includes six AA batteries (each lantern takes three) as well as a manual. The lanterns are backed by a 2-year warranty.

Setup and use of the lanterns is easy. To put batteries in, you first unscrew the base, then gently pry off a flat top, and finally add the batteries and replace the top and the base. (The manual says that the batteries are good for about four hours of light.) Turning on the lamp is as easy as pulling the top of the lantern away from the bottom, while pushing the two back together turns it off.

The lanterns themselves aren’t terribly large: they have a diameter of about 3 1/2 inches, measure 5 inches when closed, and are about 7 1/2 inches when open. The compact form is both a blessing and a curse, since it makes them very portable but also means they’re not going to have the sort of light output a larger lantern may have.

The light, though, isn’t bad. Each lantern puts out about 85 lumens of light, which is less than most of our other light sources, but it still casts enough light in its immediate area to allow for basic things like walking around in the dark and reading. 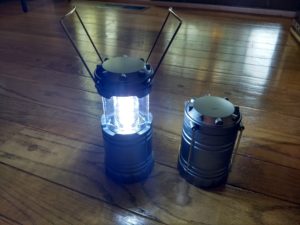 Two lanterns, one all lit up. (Click to enlarge.)

The lanterns also come with a few other features worth noting. One, each of them has two handles which can be used for carrying. Two, each has a hook on the bottom that can be lifted out of the body of the lantern and used to hang the lantern up. Three, each lantern has three magnets which can be used to affix the lantern to a metal surface, which might be handy in some instances. And finally, the lantern is water resistant, so while we wouldn’t recommend dunking these underwater, they should be able to survive a little rain, or whatever else the outdoors throws at you.

For $10, getting a pair of LED lanterns is not a bad deal. They’re compact and throw out adequate light given the size. Time will tell how long they last, but if you’re looking for something to find your way to and from your tent, these are worth a look.

UPDATE (May 2019): After one year of use, including a full season taking them camping, both lanterns appear to be working well. They’re pretty easy to use and put out a nice amount of light. We’ll be taking them camping again this summer.