Few things are more synonymous with Aldi than the almighty quarter. It is the gatekeeper, the shopping companion, and the collateral for something borrowed. Or, to be less poetic about it: in order to get a cart from Aldi, you need to insert a quarter into the cart, releasing it from a chain that connects it to the other carts. When you return the cart, you get the quarter back. (This lets Aldi run leaner and ultimately keeps product costs down.)

It’s pretty aggravating to show up at Aldi only to realize you don’t have a quarter, so veteran Aldi shoppers usually try to make sure they’ve got one on hand in case the need arises. Keeping it in some spot in the car is an option, but there is also a robust cottage industry for little quarter holders that attach to a keychain. Aldi, no doubt taking notice of the trend, decided to sell a few of its own. 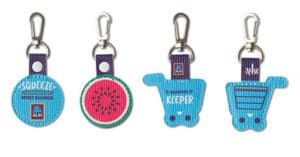 The Aldi Quarter Keychain Holder, a Special Buy (ALDI Find), retails for a mere 99 cents. (Unlike most Aldi products, it is not associated with any Aldi house brand.) At the time we purchased it, the holder came in a few different styles, including a lemon, a watermelon, a strawberry, and a soccer ball.

On one side of the keychain holder is a specific design … 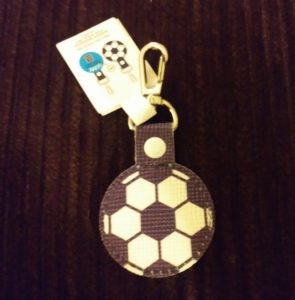 … while on the other side is the quarter holder space along with some slightly witty saying. 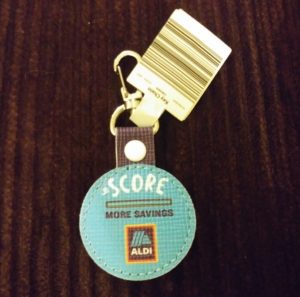 The holder itself appears to be some sort of vinyl-coated fabric, with the two sides stitched together. The holder is attached to a rotating spring-style clip.

The first thing I did was put a quarter in the thing … and it was a little fussy, actually. I pushed the quarter all the way in and found it was a bit of a bear to get it out. It got sort of stuck, and I had to fight and prod it for a minute or so before I could get it loose. The second time around, I pushed it about 2/3 of the way in and it was easier to get out. 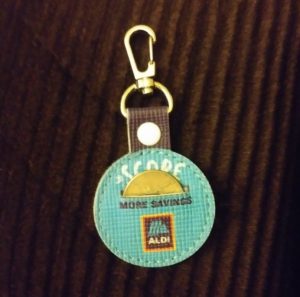 The holder with quarter. Notice that I left about 1/3 of the quarter exposed so I could get it out.

Unfortunately, the quarter will sometimes slip farther into the quarter holder just through everyday movement of the keychain, which is an irritation.

The spring clip, meanwhile, takes a bit of force to get on a keychain, but once you get the hang of it, it’s not bad, and it’s definitely easier than trying to thread two keychain loops together.

Update (March 2019): After several months of use I’ve more or less given up on this quarter holder. It’s still a real pain to get the quarter in and out (sort of a necessity given its function), and trying to put the quarter half-in isn’t a fix, as it just slides all the way in after a while. It hasn’t aged well, either. 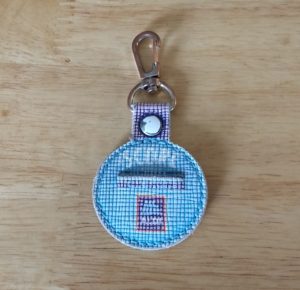 After months of time on my keychain, it’s badly worn … but still difficult to use.

We wanted to like this quarter holder, as the material feels decent and the clip seems well-designed. And the price is nice.

Unfortunately, the quarter can be hard to get out if it gets too far in the slot, which can happen just through your keys moving around in your pocket. If you’re looking for a lower-hassle holder, you probably will still be better off looking on Amazon or Etsy, albeit for more money.