While attending a family reunion at a relative’s sustainable farm this summer, I noticed the farm’s on-site shop sold kombucha. I was intrigued. I had never tried the fermented, probiotic-laden drink before, and where better to sample a new food than at a place where you know you’ll be getting a quality product and the real deal? I got a blueberry-lemongrass kombucha and shared it with some other family members so we could all taste it, with mixed reviews.

I remembered I’d seen bottles of kombucha in Aldi’s refrigerated section. I figured now that I’d tried quality kombucha, I could speak some to what Aldi offers.

Aldi sells three brands of kombucha as Regular Buy products that are in stores all the time: VitaLife (an Aldi house brand), as well as GT’s and Wonder Drink (two brands that are available at other retailers besides Aldi).

Aldi also sometimes sells other brands of kombucha as limited-time ALDI Finds (Special Buys) that are in stores for a short period and then are gone. In August of 2019, for example, Aldi is selling Health-Ade Bubbly Rose Kombucha and Health-Ade Cherry Berry Kombucha for $3.28 for a 16-oz. container (20.5 cents an oz.) as a limited-time offer.

My focus here will be on the three brands that Aldi stocks all the time in its stores. But first, a few questions: 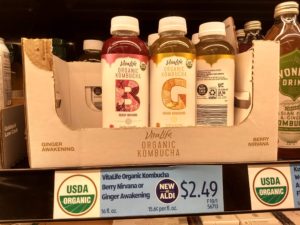 Kombucha is a fermented drink made with tea, often with juice, spices, and other flavors added. Kombucha is made using a SCOBY, which stands for Symbiotic Culture of Bacteria and Yeast. It’s a rubbery, squishy blob often called a “mother.” The SCOBY is placed in a mix of tea and sugar, which goes through a fermentation process in which, according to my bottle of GT’s kombucha, the SCOBY consumes the sugars and caffeine and “transforms the tea into this naturally effervescent drink once known as ‘the tea of immortality.'”

The fermentation process leaves behind a bubbly, fizzy drink that is not overly sweet. Kombucha may be a bit of an acquired taste, and some people describe it as having a flavor similar to apple cider vinegar, both tart and slightly sweet. For this reason, most of my family didn’t really care for the kombucha we had at the family farm, although my sister and I both thought it wasn’t bad, and we appreciated that it wasn’t heavily sweetened.

You may also notice that some kombucha has a few visible “floaters” and sediment in it. This is normal and is part of the bacterial culture. It indicates the drink has live cultures in it.

Time magazine reports that foods that have gone through a natural fermentation process (yogurt, for example) contain probiotic qualities that may improve digestion and gut health and promote a healthy microbiome, but nutrition experts say more research is needed. Some people believe kombucha can cure or alleviate symptoms of diseases such as high blood pressure, diabetes, and even cancer, but there have been no clinical trials to confirm those claims.

Kombucha does contain a small amount of alcohol, with commercial varieties containing less than 0.5%. Time magazine notes that beer usually has a 5% alcohol content and wine has 12%. In comparision, kombucha has such a low amount of alcohol that no one is going to card you when you purchase it.

Mayo Clinic reports that some people experience adverse reactions such as an upset stomach, infection, and allergic reactions after drinking kombucha, but this is mostly an issue with home-brewed batches that are at a higher risk of contamination. For some of these reasons, pregnant or breastfeeding women may be advised to limit their consumption of kombucha or check with their doctors. Storebought versions of kombucha are usually okay, according to Women’s Health magazine, though some health experts recommend limiting consumption or starting out with small amounts if you’re new to kombucha.

Now that you know what kombucha is, let’s take a look at the brands Aldi sells.

Aldi recently introduced its own house brand of kombucha. VitaLife kombucha is $2.49 for a 16-oz. bottle, or 15.6 cents per oz., at the time of publication. It’s the least expensive of the three kombucha brands available at Aldi. VitaLife kombucha flavors include Berry Nirvana and Ginger Awakening.

VitaLife’s kombucha is described on the bottle as “sparkling fermented tea with live probiotic cultures.” It also states it contained 1 billion CFU probiotics at the time of bottling, and it’s certified organic through California Certified Organic Farmers. Other than that California reference, there is no indication as to who makes Aldi’s kombucha. One 8-oz. serving of Berry Nirvana kombucha has 45 calories, with 11 grams of total carbohydrates and 11 grams of sugars. 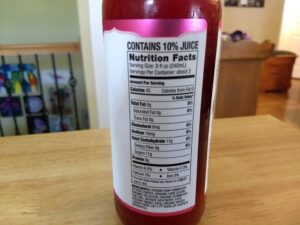 My family tried the Berry Nirvana flavor, which contains ingredients that are similar to the more expensive name brand GT’s Trilogy-flavored kombucha, which makes us think Aldi may have been trying to create its own less-expensive imitation.

My family tried the VitaLife Berry Nirvana kombucha alongside GT’s Trilogy kombucha. Both contain raspberry juice, lemon juice or puree, and ginger juice. GT’s Trilogy also contains some kiwi juice, so the two flavors are not exactly identical, but they are pretty similar.

The most notable difference was that the Aldi brand had a stronger ginger flavor with a lot of gingery bite. GT’s Trilogy, on the other hand, seemed to have more balance among all the different flavors. We also thought the Aldi brand had a sweeter flavor, and it indeed does have a higher sugar content with 11 grams of sugar per 8-oz. serving versus GT’s Trilogy’s 6 grams of sugar per 8-oz. serving.

I thought Aldi’s Berry Nirvana flavor was okay, but my family didn’t like its ginger taste, and especially the ginger aftertaste. Unfortunately, if you don’t like ginger, both of Aldi’s VitaLife brand kombucha flavors contain ginger. It seems to be a popular kombucha flavor overall, as it shows up in a lot among other kombucha brands at Aldi as well. If you like drinks like ginger ale, any of the gingery-flavored kombuchas should be your, well, cup of tea.

In addition, I noticed a visible difference between the Aldi VitaLife brand of kombucha versus name brand GT’s kombucha: the VitaLife does not appear to have the visible culture strands or “floaters,” which are indicators of live probiotics, that the GT’s had.

Aldi sells a variety of flavors of GT’s kombucha for $2.89 for a 16-oz. bottle, or 18.1 cents per oz., at the time of publication. Flavors include Trilogy, Gingerade, Gingerberry, Cosmic Cranberry, Lemonade, and Strawberry Serenity. 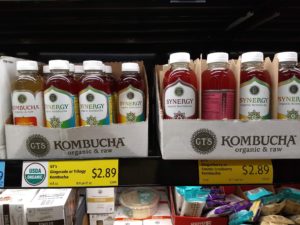 GT’s kombucha at Aldi, in a variety of flavors. (Click to enlarge.) 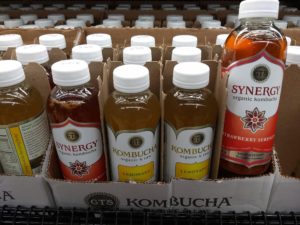 GT’s kombucha is based in California, and the founder credits kombucha with helping his mother when she was diagnosed with an aggressive form of breast cancer.

GT’s kombucha also is sold at Walmart, Target, Walgreens, Amazon, and even places like 7-Eleven in my area. At the time of publication, most of GT’s kombucha at Walmart is $2.67 and Target sells it for $2.99.

Several members of The Aldi Reviewer Discusssion Group Facebook page said they like the Trilogy flavor, which we compared (see above) with Aldi’s VitaLife Berry Nirvana kombucha. 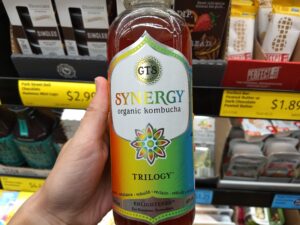 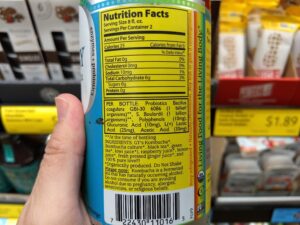 In addition to trying GT’s popular Trilogy flavor, I also tried GT’s Synergy Strawberry Serenity flavor, which tasted similar to what I tried at my family member’s farm, and my husband liked the strawberry flavor better. It contains kombucha, black tea, green tea, kiwi juice, and strawberry juice. One 8-oz. serving (half a bottle) contains 30 calories, 8 grams of carbs, and 8 grams of sugars. 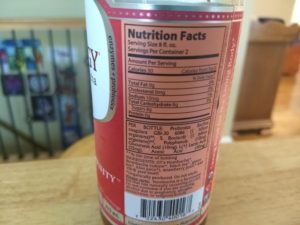 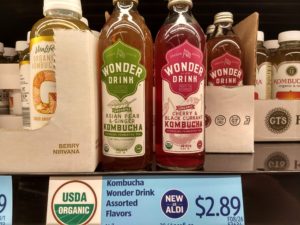 We have not had Wonder Drink kombucha, but it’s another option available at Aldi. It was $2.89 for a 14-oz. bottle or 20.6 cents per oz. at the time of publication, making it the most expensive of all of Aldi’s Regular Buy kombucha options. Aldi carries an assortment of flavors, including Cherry and Black Currant as well as Asian Pear and Ginger. 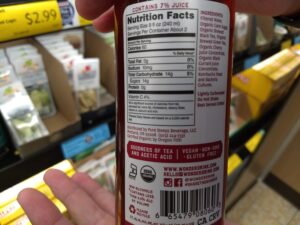 Wonder Drink, headquartered in Anaheim, California, states on its website that the company was founded by Stephen Lee, who also created Stash Tea and Tazo Tea. Wonder Drink kombucha also can be found at locally owned grocery stores, and Walmart offers it in bulk on its website.

Aldi sells its own house brand of kombucha under the VitaLife name, as well as name brand GT’s kombucha and Wonder Drink kombucha. One of Aldi’s house brand kombucha flavors, Berry Nirvana, even seems to be an effort to imitate name brand GT’s Trilogy-flavored kombucha. Kombchua, a fermented tea, is reported to have some probiotic benefits. It’s fizzy but not carbonated, and it’s not overly sweet. If you’re wanting to try kombucha or are looking for a place to buy it for less money, Aldi has several options.