During the post-World War II era, portable, disposable food products became all the rage, from frozen pizza to TV dinners. One such product came from, of all places, Switzerland: a small pouch of juice concentrate drink that came with its own little straw. It was released in 1969 as Capri Sun, and while it is still owned by a Swiss company, it is distributed worldwide by other companies, including Coca-Cola in much of Europe and Kraft foods in the United States.

Capri Sun has its share of imitators, one of them being Aldi, which sells a Capri Sun imitation. 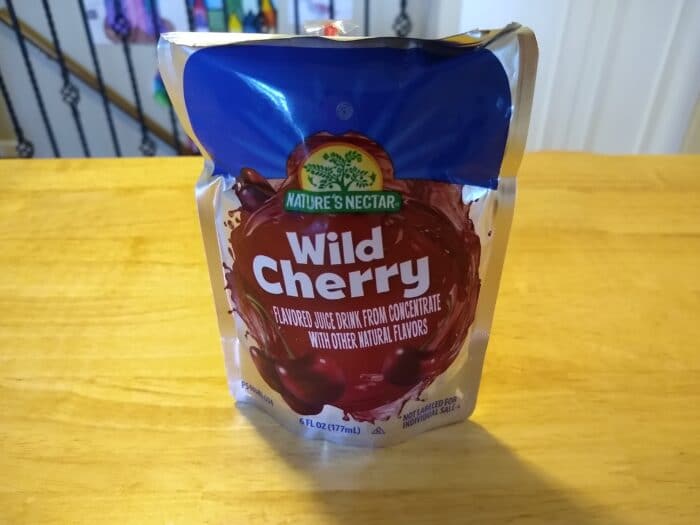 Nature’s Nectar Juice Pouches are a Regular Buy, meaning you can find them in stores all the time. You can purchase them in a multi-pack carton of juice pouches, although we’ve also seen individual pouches packed in with a short-lived Park Street Deli version of Lunchables. The carton comes with 10 pouches and currently runs $1.99. At the time of this post, Aldi sells them in Wild Cherry, Strawberry Kiwi, and Fruit Punch flavors.

If you have any familiarity with Capri Sun, you’ll know what you’re getting. This is a 6-ounce juice pouch that is designed to stand flat on a table, so you can sip from it and then set it down. It comes with its own straw, which you must artfully poke through an entry hole at the top and down into the pouch. The pouches do not need to be refrigerated while unopened (although they taste better if you do) and they should be refrigerated after opening and consumed within 48 hours of opening if it makes it that far.

I would say that, on balance, these pretty much taste like Capri Sun. All the flavors are a little different, but they work. If you’re in the market for a Capri Sun imitator, I think this is a pretty good one. My daughters have also tried them and reached the same conclusion.

There are a couple of considerations with these. One, these pouches are not recyclable. The cardboard carton is, but the pouches are not. This is true of Capri Sun, too, but if environmental ethics are high on your priority list, be aware.

Two, these are not true juice pouches. They contain a mere 10% fruit juice, and sugar is the second ingredient behind water. This a juice drink only in the most general sense of the word. Again, this is also like a conventional Capri Sun. In fact, the Aldi pouches are just about identical across the board to a Capri Sun pouch, despite boasting on the front that it has “less sugar” than other juice drinks. (Hilariously, Capri Sun makes this claim, too.) 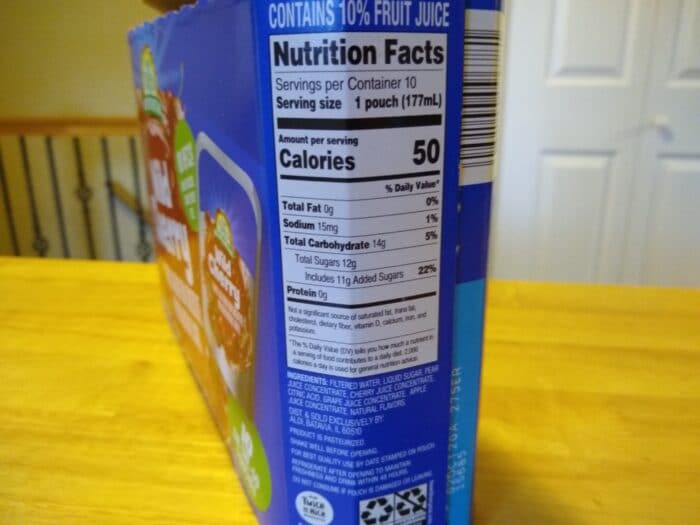 Nature’s Nectar Juice Pouches are a pretty straightforward imitation of Capri Sun, from the packaging to the drink itself. If that’s what you’re looking for, Aldi does it pretty well. On the other hand, this is — like a traditional Capri Sun — only 10% juice, and the pouches are not recyclable. We’ll leave it up to consumers to determine how important those things are.