My elementary school-aged daughter loves all things Star Wars. Being a girl, she is especially interested in Star Wars products that feature characters like Rey, Princess Leia, or even the villainous Captain Phasma. When Aldi’s recent ad included a girl’s Star Wars t-shirt as a Special Buy, I made a mental note to pick one up when it hit the shelves. 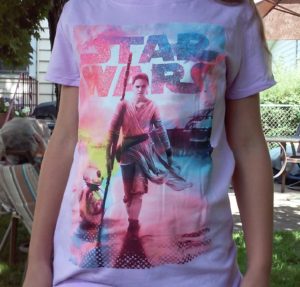 This shirt actually was delayed in getting to stores. While my family happened to be on vacation, we checked several different Aldi stores in Indiana and couldn’t find the shirt during the first two days when it was supposed to be on sale. When I asked an employee, she said to check again in a few days because there was some kind of shipping delay. After four days, we finally found the shirt in a store.

One feature sets this Star Wars Girl’s Licensed Graphic Tee apart from other clothing Aldi sells. It is not part of the L & D clothing line Aldi typically sells as Special Buys. The “tag” printed on the back of the neck says “Star Wars,” lists the website starwars.com, and indicates Lucasfilm Ltd. holds the copyright and trademark.

As for the quality of the shirt itself, it is made of fairly thick 100% cotton, made in Nicaragua. The light pink shirt features a screen print image of Rey with the droid BB-8 and an unidentified ship in the background. My daughter likes how the “Star Wars” words on the front of the shirt are sparkly.

The tag indicates the shirt can be machine washed in cold water and tumble dried on low heat. Do not iron the decorative image. I would recommend turning this shirt inside-out while washing and drying to preserve the image.

As for fit, my 8 1/2-year-old is at the stage where a size 7/8 or a medium still fit her, but some things are starting to get a little small. I bought this Star Wars Girl’s Licensed Graphic Tee in a large, which is probably equivalent to a size 10/12. It is a bit long on my daughter, but it is not baggy and would be perfectly fine to wear to school or for play. In fact, with summer vacation nearly at an end, my daughter is planning to wear it on her first day of school.

Recommended. If you know a girl who likes Star Wars, she’ll probably love this shirt featuring a popular female character.