In recent years we’ve seen a lot of experimentation with pizza in an attempt to make it healthier, often by altering the crust ingredients. Aldi sometimes sells various cauliflower crust pizzas, and cauliflower is a popular ingredient these days in everything from pizza snacks to breadsticks. Most recently, though, Aldi sold a frozen pizza with a crust made using broccoli and cheddar cheese. We decided to take a closer look. 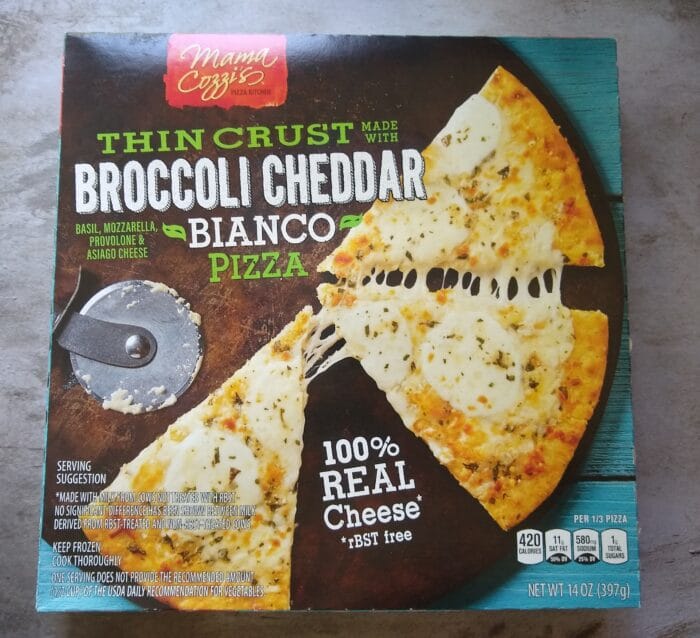 It’s sold frozen and features basil, mozzarella, provolone, and Asiago cheese. A bianco pizza, also called bianca pizza or pizza bianca, means white pizza. This type of pizza does not have the red tomato sauce most people are accustomed to and instead is just topped with seasonings like garlic and various white cheeses.

This is an Aldi Find, which means it’s only in stores for a short time, and once it sells out at your local store there is no way to order Aldi specials online. 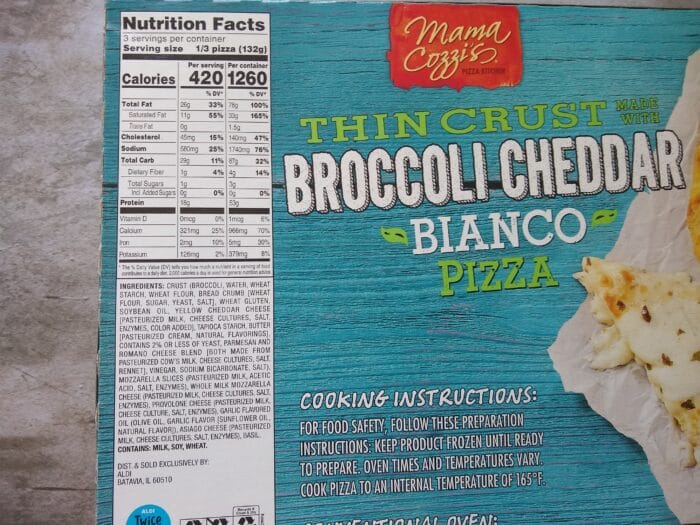 Primary ingredients in the crust are broccoli, water, wheat starch, wheat flour, bread crumb, wheat gluten, soybean oil, and yellow cheddar cheese. You can view the full ingredients list in the photo below.

If you’re avoiding allergens, this pizza has milk, soy, and wheat.

With 29 grams of total carbohydrates per serving, the broccoli in this pizza crust doesn’t really make it low-carb, although it does have fewer carbs than a lot of traditional pizzas. For example, many regular pizzas have from 40-70 grams of carbohydrates per slice.

To heat this pizza, start by preheating your oven to 425 degrees Fahrenheit. Place the pizza directly on the middle rack (I put mine on a special pizza pan with holes) and bake for 13-15 minutes or until the cheese in the center is melted and the crust is golden brown. 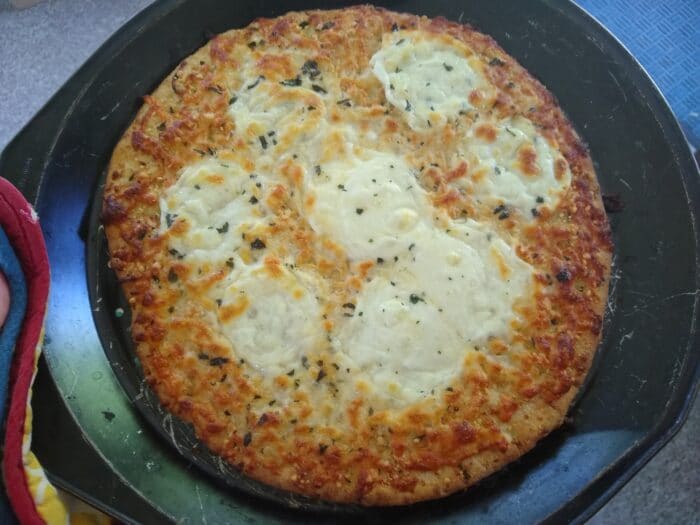 This baked up easily in my oven and was done after about 12-13 minutes, so you’ll want to keep an eye on it as it bakes. The crust was crisp and golden, and so was the cheese toward the edges.

This is almost like a cheese bread because there is no sauce, but it’s very generous with the cheese. The crust has a slightly different texture, almost airy, probably due to the cheese in it. It also has a few green flecks of broccoli, but they’re hardly noticeable and we couldn’t really taste them. We also didn’t notice a very strong cheese taste in the crust. Everyone in my house — including some of the more cautious/picky eaters — enjoyed this pizza because of its abundant cheese topping. It makes a good easy lunch or dinner. Serve with a salad and it’s perfect.

Mama Cozzi’s Thin Crust Broccoli Cheddar Bianco Pizza has a crust that includes broccoli and cheese, and the pizza itself — in keeping with white pizza or pizza bianca — has no tomato sauce and instead is topping with plenty of seasonings and various types of cheese. The crust does not necessarily make this low-carb, but it does contain fewer carbs than traditional pizza. If you want something a little different, this is worth a try.