Ask Trader Joe’s fans what the best TJ’s products are, and you’ll get some different answers. Some might mention the Sublime Ice Cream Sandwiches or the Hold the Cone Ice Cream Cones. Others might talk about the Everything but the Bagel Seasoning Blend, the Unexpected Cheddar Cheese, the chicken tikka masala, the butter chicken, or the mac and cheese.

But the hands-down favorite, according to Trader Joe’s Annual Customer Choice Awards, is the Mandarin Orange Chicken. This chicken dish is so popular that it’s actually won top billing two years in a row.

Orange chicken features a mix of sweet and sour flavors achieved through the use of ingredients such as brown sugar, honey, vinegar, and soy sauce. It is a well-liked dish in American Chinese restaurants, and Panda Express claims that one of its chefs created the dish in 1987 in Hawaii.

Frozen, ready-to-heat orange chicken is stocked at many grocery stores, and I often keep a bag of Fusia Asian Inspirations Mandarin Orange Chicken from Aldi — a cousin to Trader Joe’s — in my freezer for nights when I need to make a quick and easy meal for my family.

We’ve tried the Trader Joe’s Mandarin Orange Chicken a few times, even sampling it as part of an Aldi Vs. Trader Joe’s Chinese Takeout Showdown a few years ago. At that time, our taste testers unanimously agreed they liked the Aldi version better — it had more chicken and the chicken was more tender, and it had more sauce. Since TJ’s Mandarin Orange Chicken has garnered so much attention from fans over the past couple of years, I figured it was time to try it again. 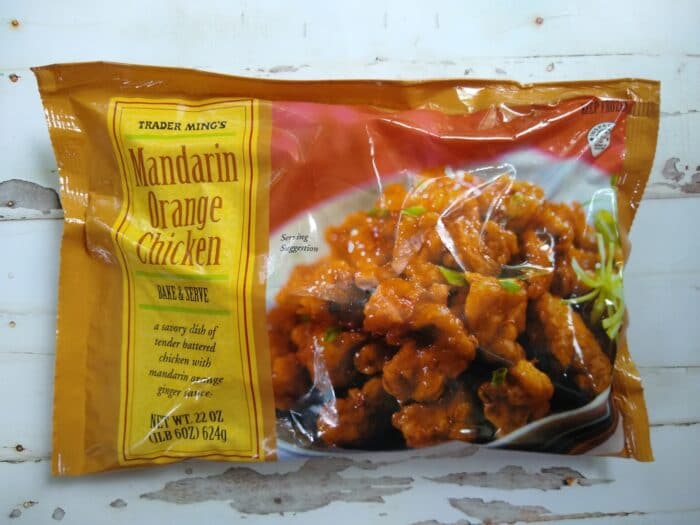 Trader Joe’s Mandarin Orange Chicken cost $4.99 for a 22-ounce package at the time of publication.

The package describes this as “a savory dish of tender battered chicken with mandarin orange ginger sauce.”

The TJ’s chicken has more calories and fat compared to Aldi orange chicken but less sodium and fewer carbs and added sugars. 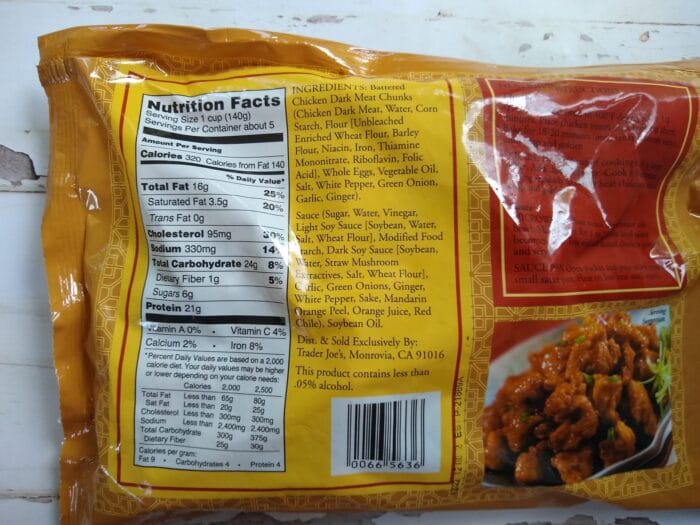 To heat the chicken in a conventional oven, preheat the oven to 400 degrees for 10 minutes. Place chicken pieces on a baking sheet. Bake for 18-20 minutes until crisp and golden.

To heat the chicken in a skillet, heat 1/4 cup of cooking oil in a large skillet. Add chicken pieces. Cook 8-10 minutes, turning regularly to evenly heat chicken pieces until crisp and golden.

To heat the sauce in the microwave, pour the sauce into a microwave-safe bowl. Microwave for 1-2 minutes until sauce is hot. Toss well with heated chicken pieces and serve.

To heat the sauce in a saucepan, open the packet and pour the sauce into a small saucepan. Heat on low heat until warm. Then mix with heated chicken pieces and serve. 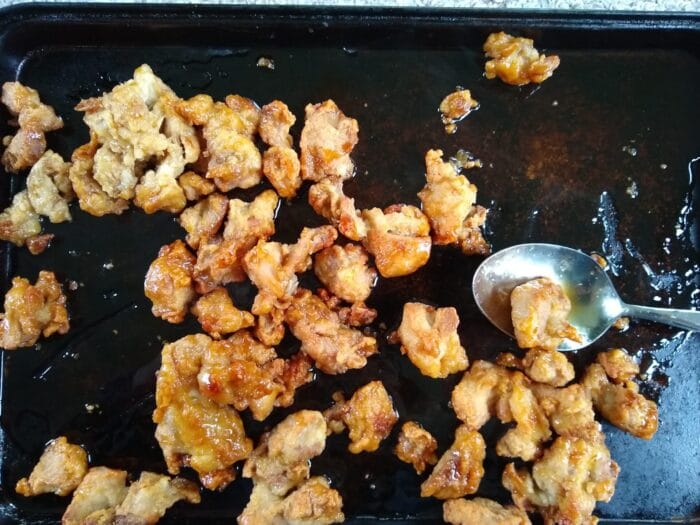 Chicken after baking in the oven, with sauce added afterward.

I opted to prepare this chicken in my oven. It was done after 18-19 minutes. I served it alongside some Trader Joe’s Chicken Spring Rolls, Aldi potstickers, and Aldi chicken lo mein.

My family had mixed opinions on this chicken. Some people really liked it and thought the breading was unique. Others who are accustomed to Aldi orange chicken didn’t care for this TJ’s version as much, saying the chicken was tougher and chewier. That tougher texture was something our taste testers noted when we tried the Trader Joe’s chicken alongside Aldi orange chicken a few years ago. While this chicken isn’t as tender as Aldi orange chicken, my husband and I thought it was all right. We all agreed this doesn’t have a lot of sauce and could probably do with a bit more. The sauce also doesn’t have as much heat to it compared to Aldi orange chicken, so if you don’t care for food that is even remotely spicy, the Trader Joe’s version may be for you. 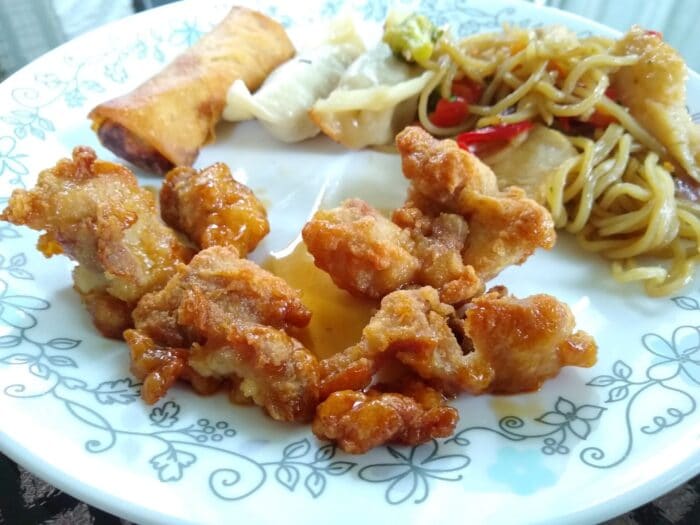 Overall, I like this chicken and would happily buy it and eat it again. It’s not the same as Aldi orange chicken, so if you’re in the mood for something different, this is worth a try.

Trader Joe’s Mandarin Orange Chicken has been voted the overall winner in the Trader Joe’s Annual Customer Choice Awards for the past two years, so it’s worth trying based on its reputation. It’s different in texture and taste from Aldi orange chicken, and it’s less saucy. Is is the best orange chicken we’ve had? Not necessarily. But it’s good.