Back in 2018, I bought and reviewed the Ambiano Belgian Waffle Maker. The Aldi Find caught my eye not long after my family had traveled out of town for a family funeral and used a Belgian waffle maker in our hotel. After years of eating those frozen waffles you heat in the toaster oven, a waffle made straight from batter felt like a revelation.

We generally liked the Ambiano waffle maker, but it did have its drawbacks. It only really was effective on the highest heat setting, and it required the use of cooking spray, which was both a hassle to use and to clean up after. It was still well worth the trouble, but I also promised myself that if Aldi offered an upgrade, I’d look into it.

In 2021, Aldi offered such an upgrade, selling a rotating model. I didn’t pick it up that year, but when it came back in 2022, I decided to take a flyer on it. 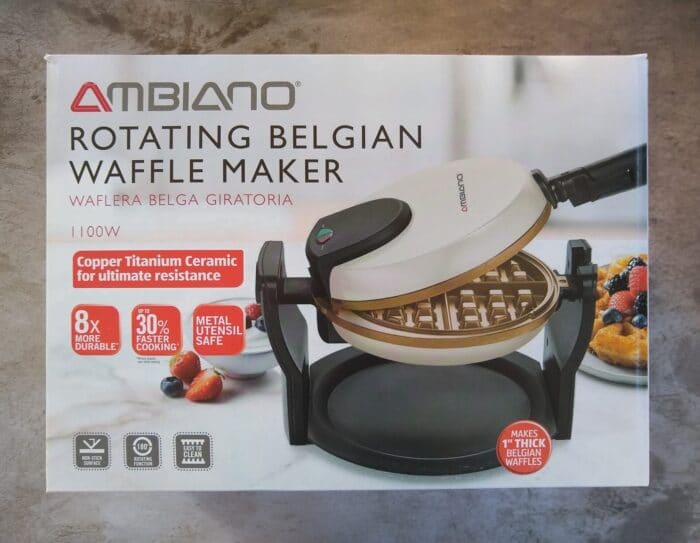 Aldi seems to sell this particular item once a year, typically in early March. At the time of this post, I paid $24.99 for the rotating model. That’s $5 more than the same model went for in 2021. Even at that price, though, it’s still considerably less than the $40-80+ most of them seem to go for online.

Also worth comparing: Aldi also still sells the non-rotating Belgian waffle maker, which has cost $14.99 the last few years. If you’re trying to go cheap, that one might be worth a look. But there are some important upgrades you get for that $10 price difference between the non-rotating one and this rotating model. I’ll talk about those here in a moment. 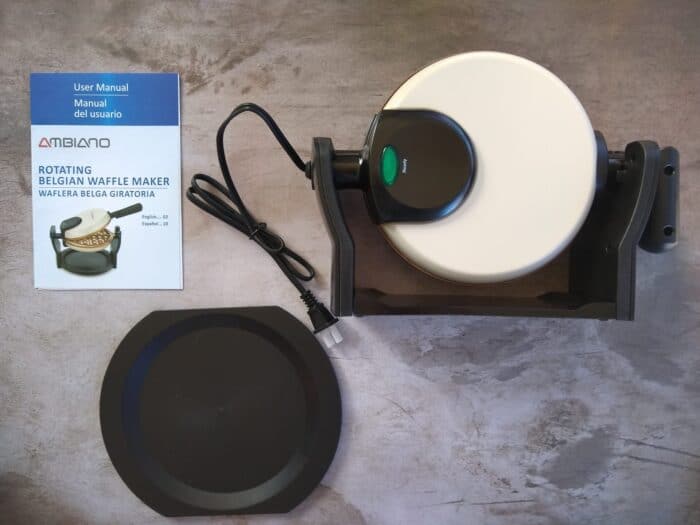 The appliance comes with just three things out of the box: the waffle maker itself, a drip tray, and a manual with warranty card. In the year we bought the product, it came in either blue or cream; we went with cream.

The waffle maker’s features include: 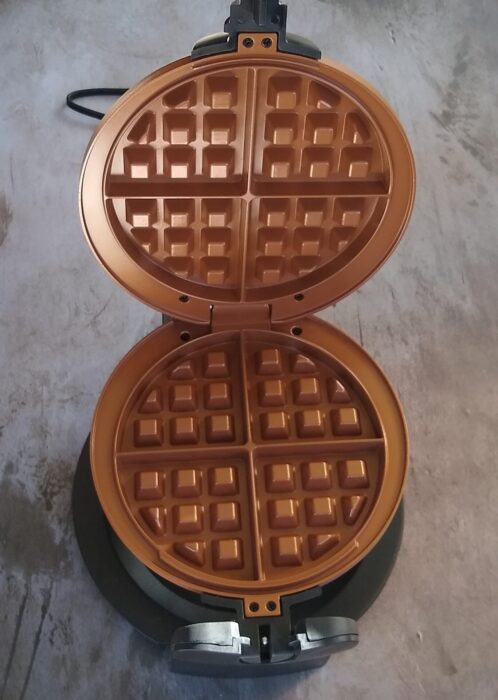 The waffle maker comes with a 3-year warranty, backed by Sensio. Sensio — which recently renamed itself Made By Gather — is a company devoted to kitchenware products. Sensio has served as the warranty provider on several other Aldi products to date, including a mini-waffle maker, a countertop electric griddle, and a smokeless grill. Made By Gather’s other brands include Bella, Crux, and and Brim. 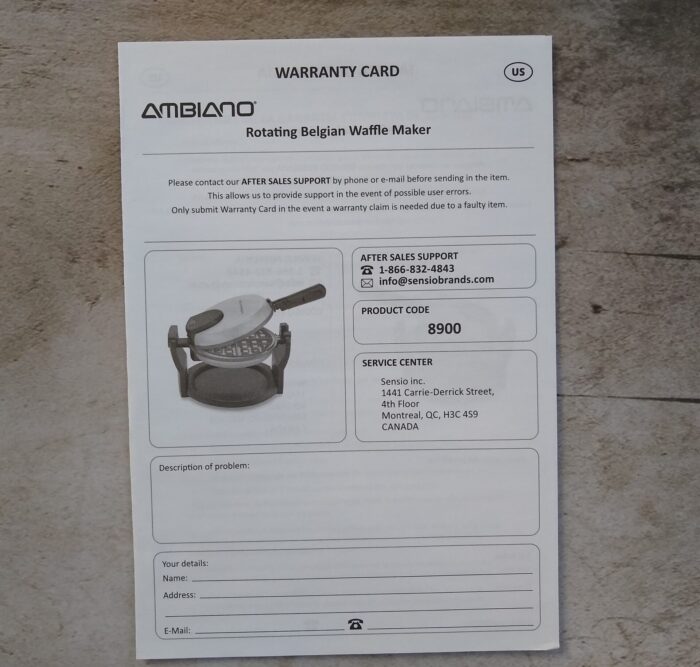 I suggest reading the manual carefully before using the waffle maker. It contains a number of warnings and recommendations for use, cleaning, maintenance, and care. It’s an appliance, so you do not want to immerse it in water, for example. You’ll also want to be careful about what kinds of utensils you use when getting the waffles out, sticking with nylon, plastic, wood, or rubber rather than metal.

Unlike many other waffle makers, including the standard Ambiano Belgian Waffle Maker, this one uses a ceramic nonstick surface. Not only does that mean you don’t need cooking spray, but the manual actually advises against using spray at all.

One more thing about the manual: it does come with a few recipe ideas. You can see them in the picture below. They’re okay, but there are also plenty of Belgian waffle maker recipes out there, including this simple Taste of Home recipe that is my go-to for Belgian waffles. 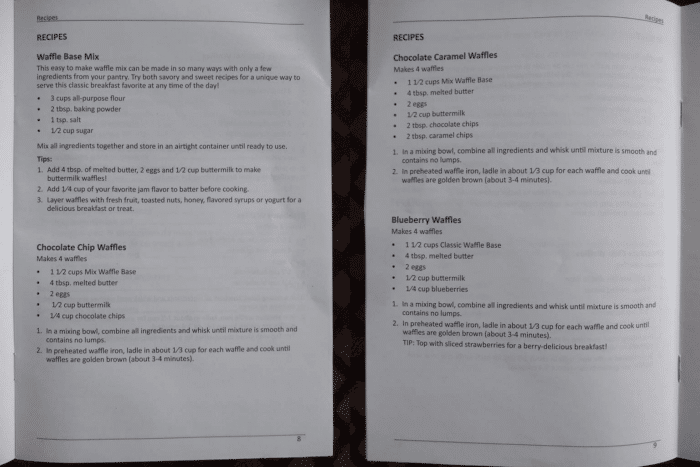 Once you’ve gotten the hang of it (again, make sure you read the manual) this is a pretty simple appliance to use. You first plug it in and let it heat up. The red light tells you it’s powered on, while the green light indicates it’s ready. There are no temperature control knobs on this one like there is on the non-rotating model, but to be honest I always kept the non-rotating one on the highest heat setting anyway, so that’s not really an issue for me.

Once the green light comes on, it’s ready for your waffle batter. I found that the waffle maker does best with a little less than one cup of batter — more than that and things start to spill over the sides. Also, the manual recommends throwing out the first waffle you make, since there can be chemicals from production on the surface.

I did all of that, then started making waffles. To use the waffle maker, you rotate the handle out, then lift up the lid, add your batter, and close the lid. Then, you bend the handle in at the joint so it’s L-shaped, then rotate the waffle maker until it’s turned over. (If you want to see what that looks like, watch the video above.)

After that, you wait. I found that, with this waffle maker, the waffles were done in about 1 1/2 to 2 1/2 minutes, although your mileage may vary. Once done, getting the waffles out is as simple as gently prying them out with a spatula. 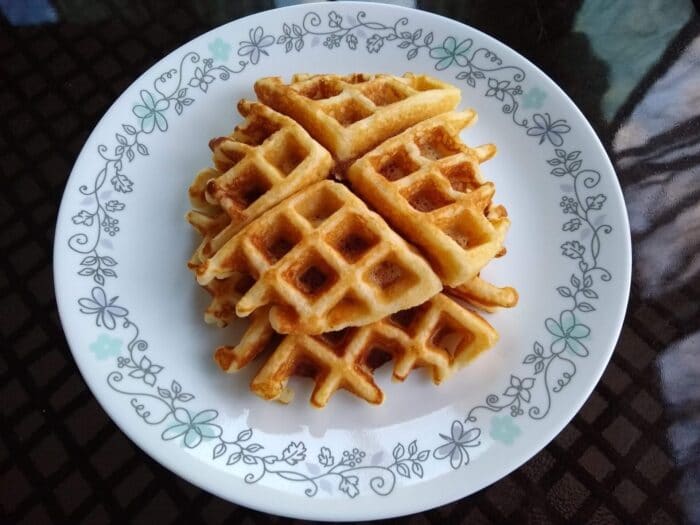 The waffles came out just right. They were just a little crisp on the outside and fluffy on the inside. They tasted great, and the rotating feature seems to do a good job in helping them cook evenly on both sides.

The waffle maker was also easy to clean. The ceramic surface left very little residue, and what little was there was easy to get off with a damp cloth. As long as the ceramic and the electronics hold up, I think this could be a great appliance for a long time to come.

The Ambiano Rotating Belgian Waffle Maker looks like a great choice for making Belgian waffles at home. It’s easy to set up and performs like I’d hope it to, making great waffles with a minimum of fuss. While I like the non-rotating Ambiano Waffle Maker well enough, this rotating one is superior enough — thanks to its ceramic surface and ease of use — that I prefer this one, even with the difference in cost.