One advantage to shopping at Aldi is that you can buy inexpensive appetizers like mozzarella sticks, meatballs, and chicken strips. Aldi’s Appetitos Ovenable Loaded Potato Bites are among some of my favorites. 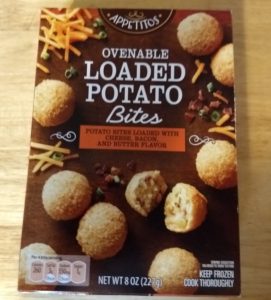 These are little round bits of potato product (the main ingredient is shredded hashbrowns) loaded with cheese, bacon, and butter flavor. One serving contains 260 calories, 3 grams of fat (15% DV), 550 mg of sodium (23% DV), and 1 gram of sugar. They come frozen in a box with about two and a half four-piece servings. They look like something that would come out of a deep fryer, but there actually are no deep frying instructions for these potato bites. The only instructions are to bake them in an oven.

My husband and I really liked the potato bites. They taste like a loaded baked potato. They are slightly crispy on the outside and soft and gooey on the inside, with a little bit of minced green onions in addition to all the other tasty ingredients. The only downside is that there aren’t many potato bites in the box, but perhaps that’s not so bad because it keeps us from eating more of them than we should.

To bake, preheat the oven to 450 degrees. Remove potato bites from packaging and place in a single layer on a non-stick baking sheet. Place the baking sheet on the center rack and bake for 13-14 minutes. Let the potato bites stand for 1-2 minutes before serving.

Aldi’s Special Buy (ALDI Find) Appetitos Ovenable Loaded Potato Bites are filled with potatoes, cheese, bacon, and minced green onions. They aren’t terribly healthy for you, but they do make a tasty appetizer or snack, especially if you’re hosting a party or other gathering. There aren’t very many potato bites in the box, though, so you’d have to buy several boxes if you plan to feed a crowd.