Aldi does appetizers. Plenty of them. Whether you’re looking to put out a few options for a gathering or just wanting a snack out of the ordinary, Aldi keeps a decent variety, especially when it rotates in Special Buys (ALDI Finds) to augment the stock.

One such Aldi appetizer is cheese sticks, which are always a popular affair at any party. We’ve previously looked at the more traditional Appetitos Mozzarella Cheese Sticks, which we didn’t like as much as we wanted to. These cheese sticks — the Appetitos Beer Battered Cheese Bites — are different. They’re beer battered, of course, but they also come with Monterey Jack cheese rather than mozzarella.

These beer battered cheese sticks come in an 8-ounce box. In our box, that translated into 16 small cheese sticks. If the box isn’t evidence enough, be forewarned: this isn’t a ton of cheese sticks, so if you plan on serving these to a larger group, you’ll probably need more than one box. 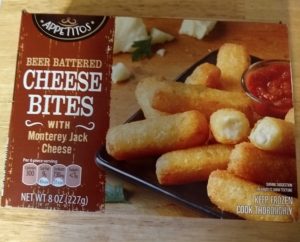 The box lists two methods of preparation: oven and deep fry. (The box notes that these are not designed for microwave preparation, so plan accordingly.) Oven preparation involves preheating the oven to 450 degrees, then placing the package contents in a single layer on a sheet pan and baking for 7 1/2 minutes, turning once for uniform cooking. Deep frying involves preheating the oil to 350 degrees, then carefully adding the product to the oil and frying for 2 1/4 minutes.

We opted to deep fry the sticks using our Ambiano Deep Fryer. The reviews among our testers were mixed. Some of them found the sticks too different from traditional cheese sticks. I personally liked them — the batter is tasty and they are definitely full of cheese — but I recognize that they may not be for everyone.

One other note: these are not very good for you. Aside from being processed, they have more than 30% of your daily allowance for fat and sodium per serving, and the cholesterol is hardly better. The saturated fat is even worse: 46%. So while you probably knew you weren’t getting a health food … be aware that you’re not getting a health food.

Appetitos Beer Battered Cheese Bites are one of those appetizers that may divide people. They have a crispy beer battered outer layer and plenty of cheese inside, but what you think of the Monterey Jack will go a long way toward determining if these are for you.