In my family, there are two teams when it comes to syrup. On one side you have Team Real Syrup, and it is led by my wife, who prefers honest-to-goodness true maple syrup from a tree. She prefers not only the taste, but the fact that it’s made naturally, rather than through artificially constructed ingredients.

On the other side, there is Team Fake Syrup. This is led by my children, who prefer the taste of artificial syrup, which they feel is less sweet and rich than the real stuff. They don’t care one way or another about ingredients.

I’m officially neutral on the subject, although if you pressed me on the issue, I probably am more likely to use the Fake Syrup, probably because it’s what I grew up with.

Aldi sells real maple syrup, and in a glass bottle, no less, so if that’s your preference, you can have it. If you want something cheaper, though — or if you just are more used to artificially flavored syrup — Aldi also sells that. 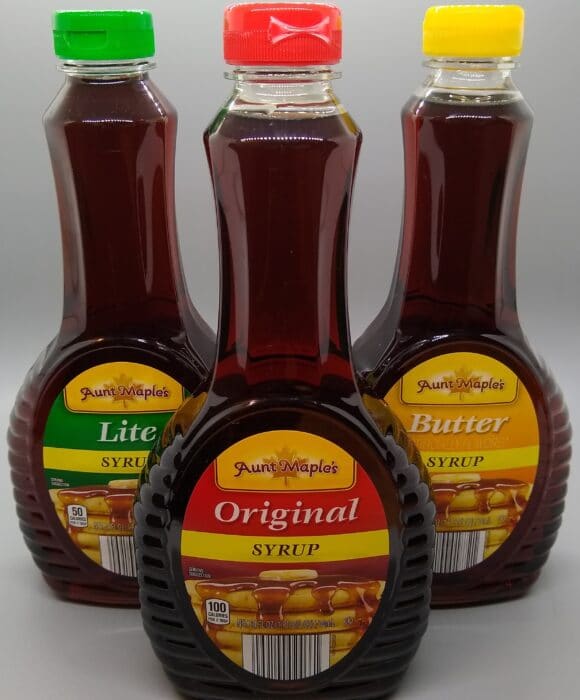 Aunt Maple’s Syrup is a Regular Buy, which means you can find it in stores every day. It comes in three varieties: Original, Butter, and Lite. All three versions currently cost $1.29 for a 24-ounce container, or 5.3 cents an ounce. This is a lot cheaper than the 7.4 cents per ounce we paid for Aunt Maple’s Syrup last year, and it is a whole lot cheaper than the 53.6 cents an ounce Aldi sells its Specially Selected 100% Pure Maple Syrup for.

Aunt Maple’s comes in an easy-to-use plastic bottle. You simply unscrew the cap, remove the seal, put the cap back on, and then pop the cap open to reveal a pour hole. The bottle notes that — unlike real maple syrup — you do not need to refrigerate this syrup. Also, you should not microwave the bottle; if you want to heat your syrup, pour the amount you need into a microwave-safe dish first.

And then there’s the nutrition. All three versions of Aunt Maple’s use high fructose corn syrup (HFCS) as a central ingredient. All three also have corn syrup, which is less sweet than HFCS, but the Lite version has less corn syrup. My guess here is that the Lite accomplishes a similar level of sweetness in fewer calories by having a higher concentration of the sweeter HFCS.

There is debate over whether HFCS is worse for you than table sugar. Some researchers think that HFCS is worse, due to the fact that it is metabolized differently than sugar or even corn syrup. Others argue that there is no evidence that HFCS is more likely to lead to obesity than table sugar. What everyone agrees on, though, is that whether it’s sugar, corn syrup, or HFCS, moderation is best.

Nutrition and ingredients. From left to right: Lite, Regular, Butter. (Click to enlarge.)

If you want syrup for your waffles or pancakes, you can either go the route of true maple syrup or one of these three artificial versions. In my view, the three — Original, Butter, and Lite — taste very similar although they have slightly different nutritional information, especially where the Lite is concerned. As with any sweet, these are best in small amounts.