EDITOR’S NOTE (December 2017): Earlier this year Aldi discontinued these crusts as a Regular Buy, but reintroduced them around the holiday season as a Seasonal Buy: 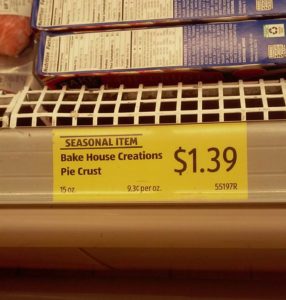 In other words, this isn’t a Regular Buy, but it’s not a short-run Special Buy (ALDI Find) either. Instead, this product seems to run for at least a couple of months during the winter holidays … but probably not long after.

Gone are the days when everyone made homemade pie crusts. Now, it’s easier to buy ready-made pie crusts at the store, and they taste just as good as the homemade variety, with much less work.

Today, we’re looking at Aldi’s Regular Buy Bake House Creations Pie Crusts. These come in a box in the refrigerated section. Two pie crusts come in a box, and they are individually rolled up and packaged in plastic sleeves inside the box. You can make two open pies with no crust on top, or you can make one traditional pie with a crust on the bottom and top. The box advertises these crusts are for a 9-inch pie and are “simple to prepare.”

The box front states your pie bakes in just 9-13 minutes, but that depends on your recipe. If you’re making a basic fruit pie with pre-cooked fruit, your bake time may be that short. However, I made a quiche recently with one of these crusts that baked for 60 minutes, with foil around the crust edges to keep them from over baking. My daughter and I made a pumpkin pie for Thanksgiving with the other crust in our box, and that baked for about an hour.

The box contains quite a bit of information related to baking directions. First, it is recommended to bring the refrigerated crust to room temperature. If you don’t do this, your crust will break and crumble when you try to unroll it, but you can let come to room temperature and gently squish the crust back together. (I know from experience!)

To start, the instructions say, “Remove sleeve(s) from box. Let stand at room temperature for 15-20 minutes OR microwave on defrost (30% power) for 10-20 seconds per sleeve. If frozen, thaw for 50 minutes at room temperature. DO NOT THAW FROZEN CRUSTS IN MICROWAVE.”

For a one crust pie, “using forefingers and thumbs, pinch crust to create a scalloped edge. Trim excess if necessary.”

For a baked shell for ice cream or pudding pie, “generously prick bottom and sides with fork. Bake at 450 degrees until golden brown: 11-13 minutes in glass pan. 9-11 minutes in aluminum pan. Cool before filling.”

For a filled pie for pumpkin or sweet potato pie, “add filling to unbaked crust. Bake according to recipe. To avoid excessive browning, cover edge with strip of foil.”

The box advertises that it contains recipes inside as well. If you open and unfold the box, four pie recipes are printed on the inside, including the same pumpkin pie recipe I got from the can of pumpkin I purchased at Aldi to make pumpkin pie for Thanksgiving. The other recipes are for a chocolate pudding pie (made with vanilla ice cream), a lemon chiffon pie (made with lemonade drink mix), and a French apple pie.

The pie crusts can be kept frozen or refrigerated. For best results, use before the date on the box. My crusts I bought the week before Thanksgiving had a best before date of December 11 of the same year, so these crusts are good in the fridge for only a few weeks.

Aldi’s Bake House Creations Pie Crusts taste as good as homemade crusts and are worth using in your next pie-baking venture. They can be stored in the fridge for a few weeks or frozen, and the box comes with several recipes. Recommended.