Sometimes you don’t have the time to make soup from scratch, or you need something simple rather than making an involved recipe. Or you want some shelf-stable foods to keep in your pantry in case of emergencies. Aldi sells soup mixes for those times. 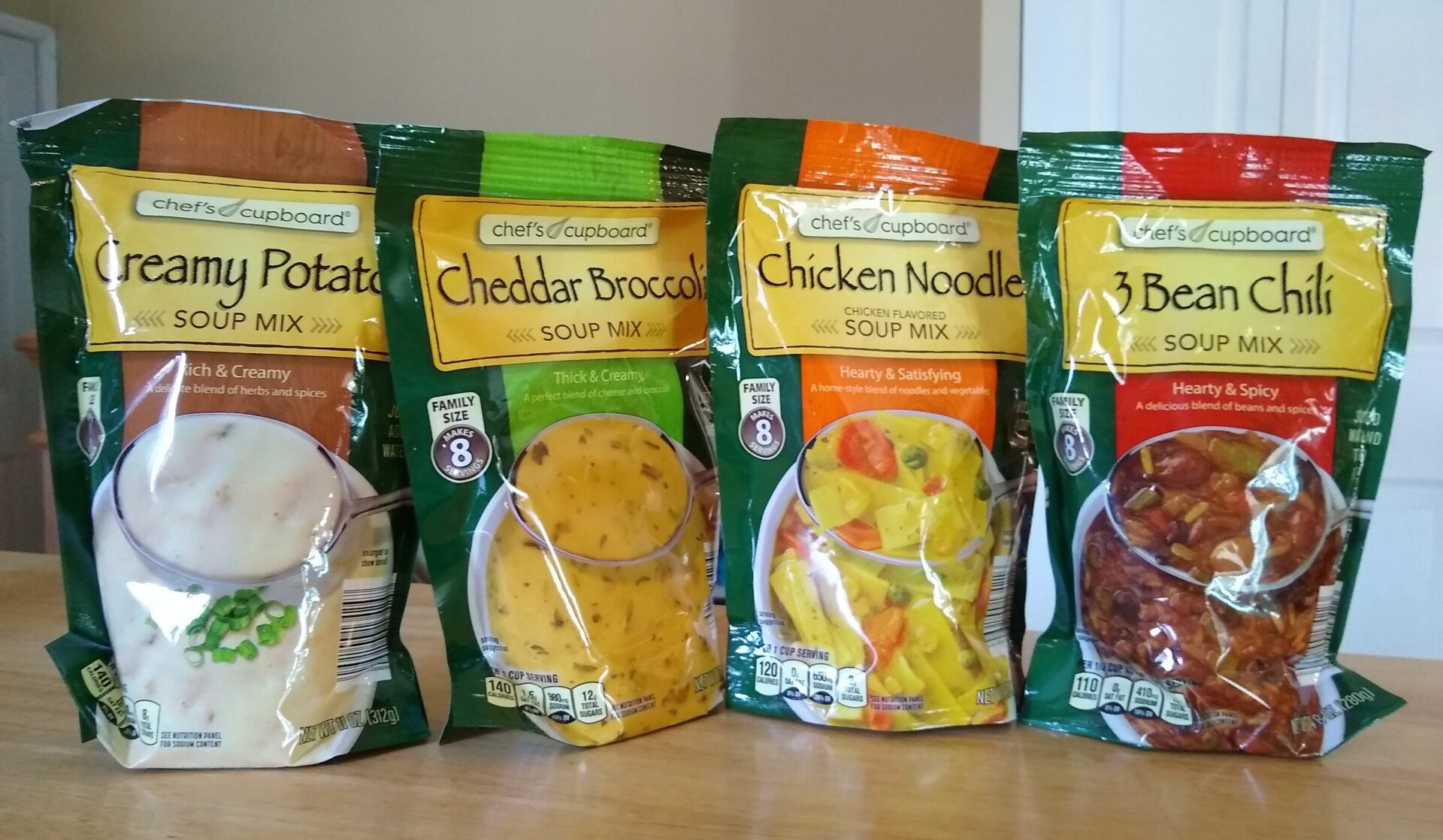 Chef’s Cupboard Soup Mix sold for $2.49 at the time of publication comes in four varieties: Cheddar Broccoli, Creamy Potato, Chicken Noodle, and 3 Bean Chili. These soups look a lot like name-brand Bear Creek soup mixes, which you could buy from Walmart for about 45 cents more at the time of publication. The Aldi soups are currently Seasonal Favorites, meaning they are in stores for just a few months — usually during the winter — and are not sold year round.

The Aldi soup mixes are easy to make. The Cheddar Broccoli, Creamy Potato, and Chicken Noodle soups only need water added to make a complete meal, while the 3 Bean Chili needs water and a can of tomato paste (which Aldi sells). After they’ve been prepared, all of the soup mixes make eight one-cup servings.

These are all processed and have some ingredients you wouldn’t find in your grandmother’s homemade soup, but that is to be expected with a commercially prepared soup mix. The fact that these are shelf stable and most of them require only water to prepare makes them a good addition to an emergency stockpile or a good meal to make while camping.

Read on for a closer look at the different soups. 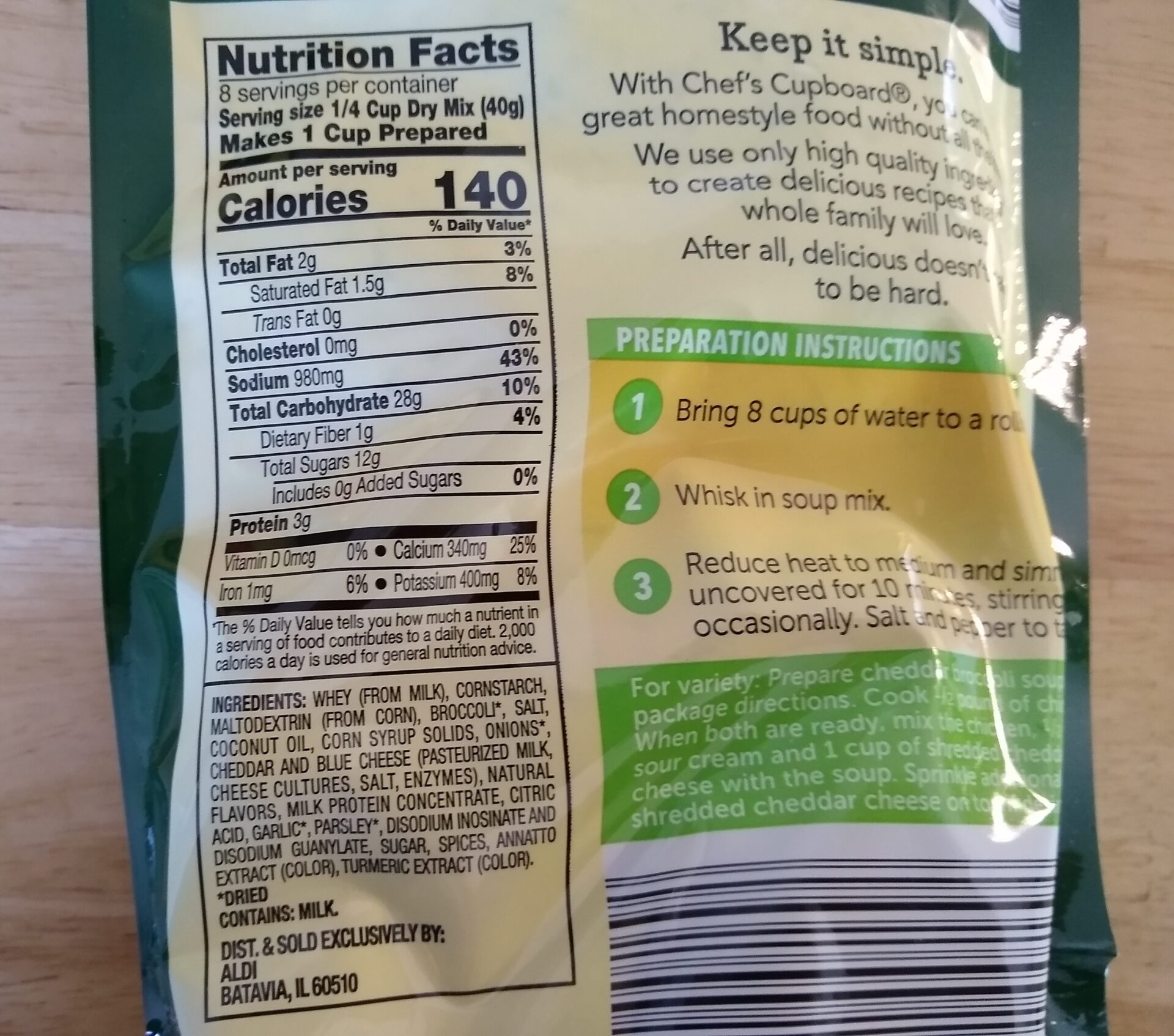 This soup came together easily on the stove top. It thickened up nicely and smelled good while heating. I served it alongside bread and butter and some fresh broccoli and Ranch dip. The soup tasted good, but the texture left something to be desired. The tiny bits of dried broccoli, dried onions, and dried parsley had a chewy, almost granular, somewhat hard texture. One family member said it almost had the texture of undercooked rice. 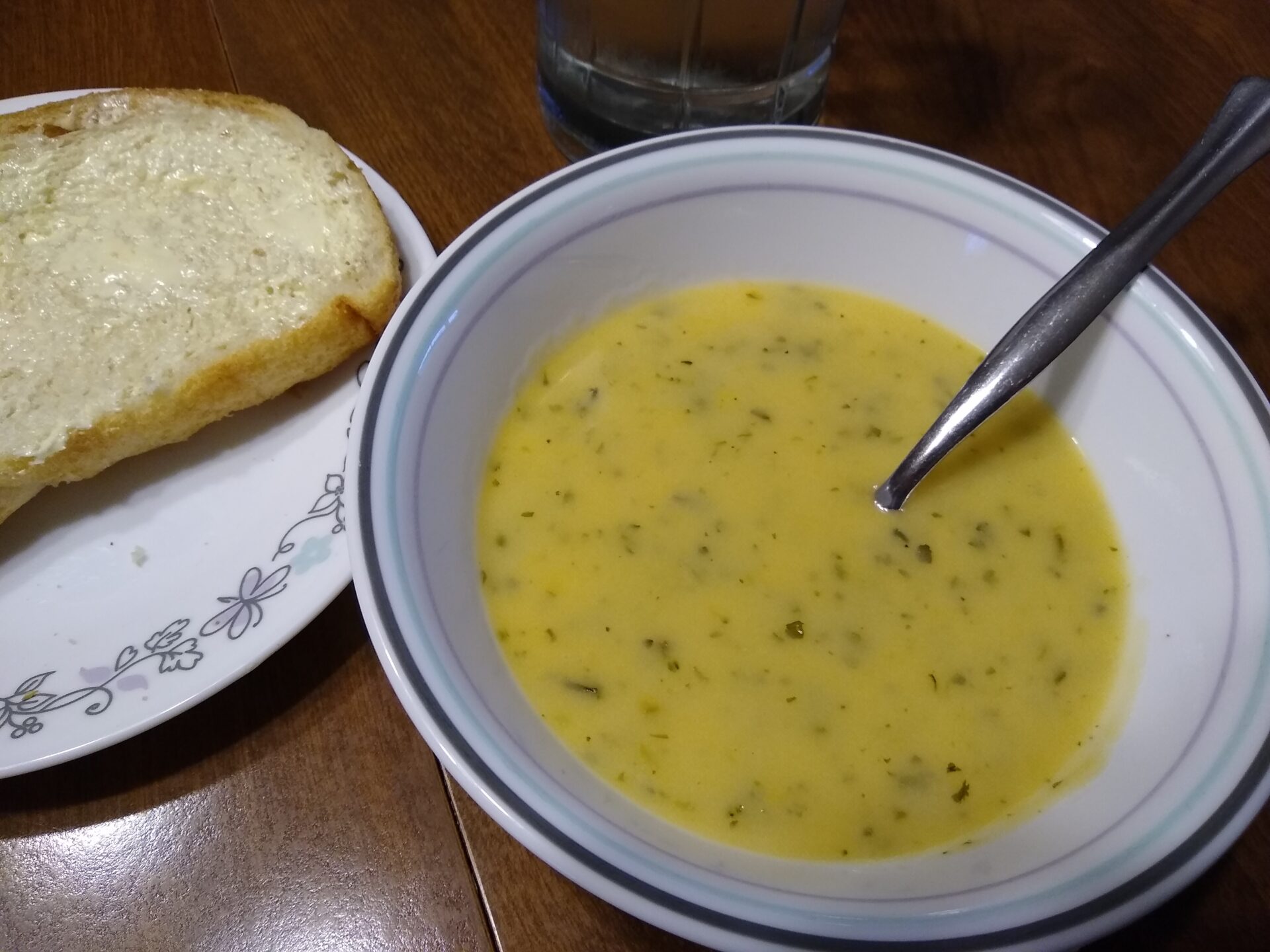 I make a lot of homemade broccoli cheddar soup using fresh broccoli, and during the cooking process it softens and practically melts into the soup broth. This soup, in contrast, was very different different in texture to what my family is used to.

It’s probably better after the leftovers have sat in the refrigerator overnight, allowing the harder bits more time to soften. When I reheated the leftover soup in a saucepan, I added some extra steamed broccoli along with a handful of shredded sharp cheddar cheese and about half a cup of sour cream. My family said they liked it better after I doctored it up.

Despite its shortcomings, in a pinch, this soup is not a bad nonperishable item to stock the pantry with.

If you’re looking out for allergens, this mix contains milk.

To prepare the soup, bring 8 cups of water to a rolling boil. Whisk in soup mix. Reduce heat to medium and simmer uncovered for 10 minutes, stirring occasionally. Add salt and pepper to taste.

For variety, the package says you can prepare the soup as directed and cook 1/2 pound of chicken. When soup and chicken are done, mix the chicken with 1/2 cup of sour cream and 1 cup of shredded cheddar cheese and mix it all into the soup. Sprinkle additional shredded cheddar on top if desired. 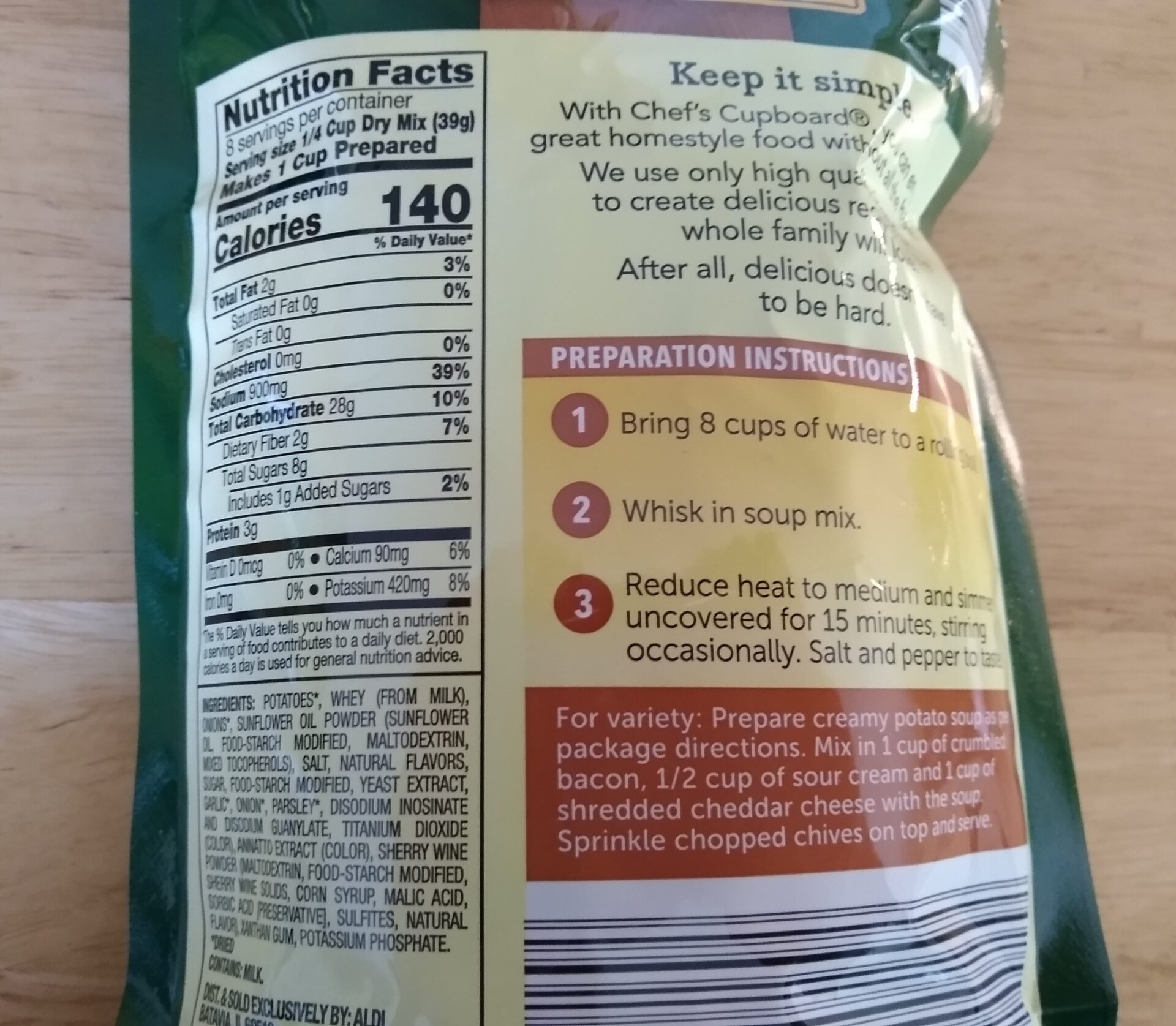 My family liked this soup better than the broccoli cheddar because it does not have hard, dried green bits. It still tastes like a processed, shelf-stable soup, and one family member said it tastes like “freeze-dried soup.” Also, the potatoes are small, flat, square discs that feel a little odd in your mouth. With that said, this soup is not bad on its own. What’s more: it was very good when we doctored it up with sour cream, shredded cheddar, green onions, and bacon. 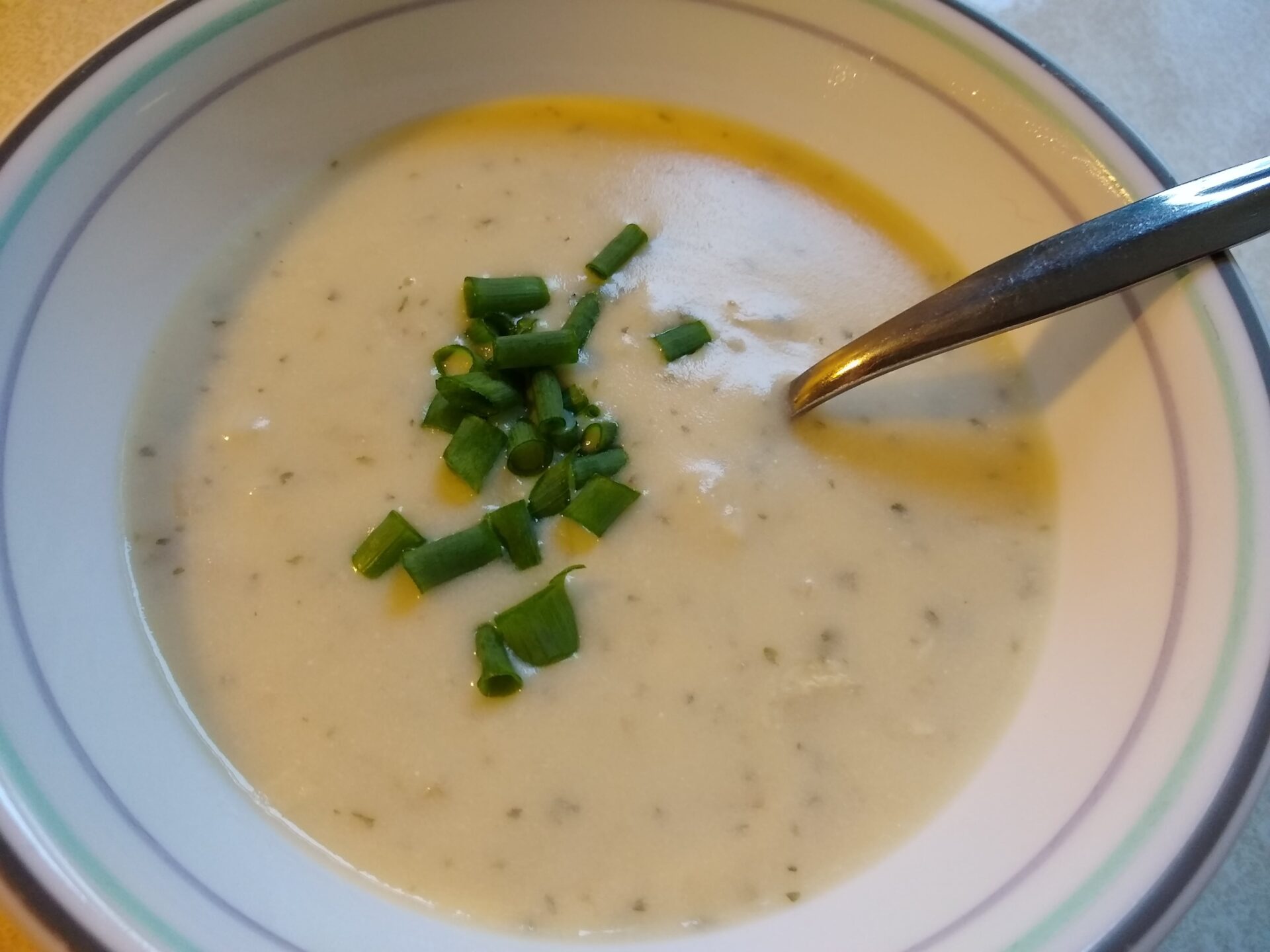 To prepare, bring 8 cups of water to a rolling boil. Whisk in soup mix. Reduce heat to medium and simmer uncovered for 15 minutes, stirring occasionally. Add salt and pepper to taste.

The package says that for variety, you can prepare the soup as directed and mix in 1 cup of crumbled bacon, 1/2 cup of sour cream, and 1 cup of shredded cheddar cheese. You also can sprinkle chopped chives on top immediately before serving. 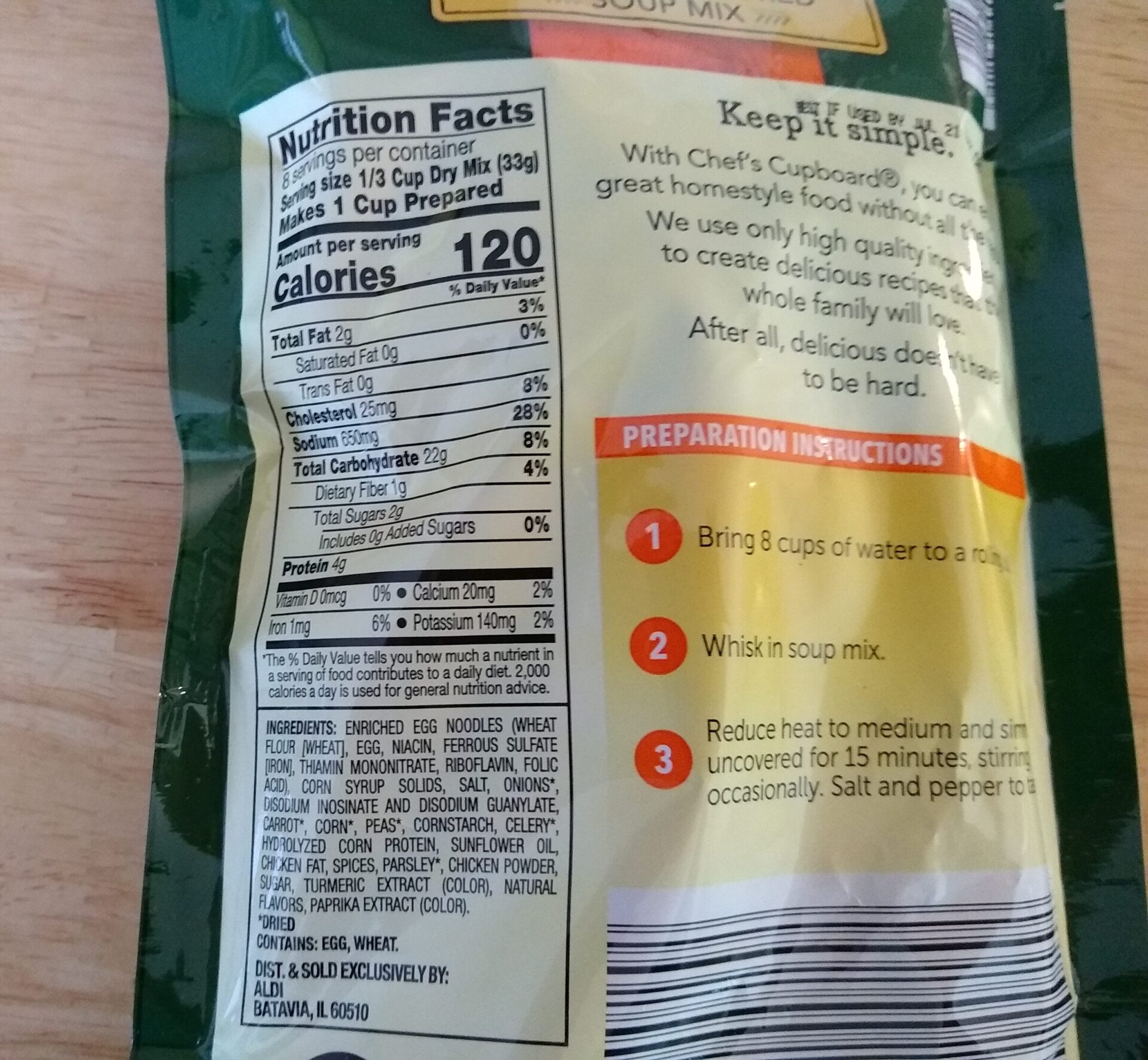 This soup smells delicious while it’s simmering, with a savory chicken broth aroma. I cooked it for five minutes longer than the directions stated in order to soften some of the vegetables a little more. This tasted like it smelled, with lots of flavor and good seasonings.

My family had mixed opinions about this soup, with some people preferring the milder, simpler taste of canned chicken noodle soup while others enjoyed the more complex flavors and seasonings in this soup. I personally like this soup better than canned chicken noodle soup. It’s missing the little chunks of chicken that you get in canned soup, but you can add chicken if you want. Also, the noodles are heartier and firmer than canned soup noodles, and they are a highlight of this soup.

This does better after the leftovers have spent the night in the fridge, giving the dried veggies like the peas and celery some time to absorb some liquid and soften up. 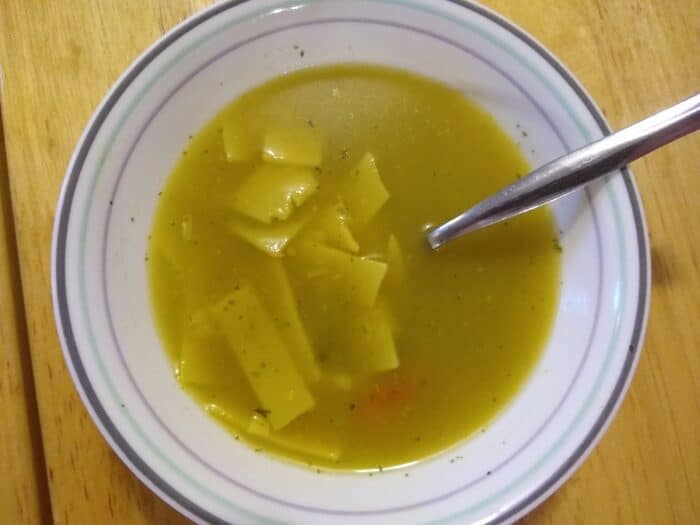 This mix contains egg and wheat.

To prepare, bring 8 cups of water to a rolling boil. Whisk in soup mix. Reduce heat to medium and simmer uncovered for 15 minutes, stirring occasionally. Add salt and pepper to taste. 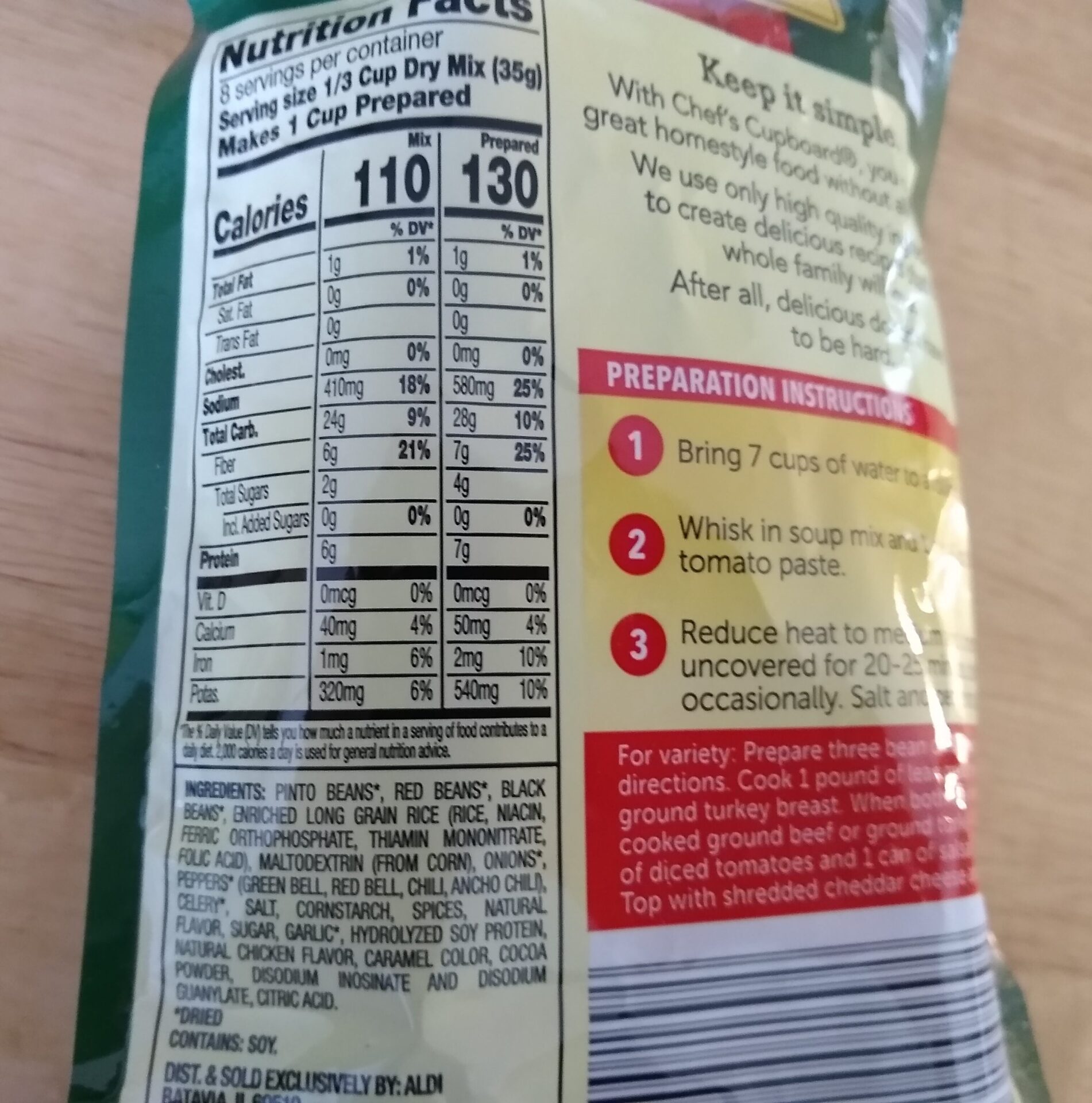 This takes a little longer to cook on the stove top because it contains dried beans, which naturally need a little more time to soften. The instructions state to simmer it for 20-25 minutes. It took around 27 minutes for me to get the beans tender enough. This is also the only soup mix in the group that needs an extra ingredient besides water; this chili calls for a small can of tomato paste (which you can pick up at Aldi in the canned goods aisle near the soup mixes).

My family thought the chili tasted okay. It has some small pieces of celery in it that I sometimes tasted, and that seems like an odd ingredient for chili. It also lists rice among the ingredients, but the long simmer time tenderized the rice so much that it was not very noticeable. This is not bad overall for a dehydrated chili mix, and it’s a source of both protein and fiber. My family liked it served with some of the usual chili toppings: Aldi’s version of Fritos, Aldi Saltine-style crackers, chili powder, and shredded cheese. 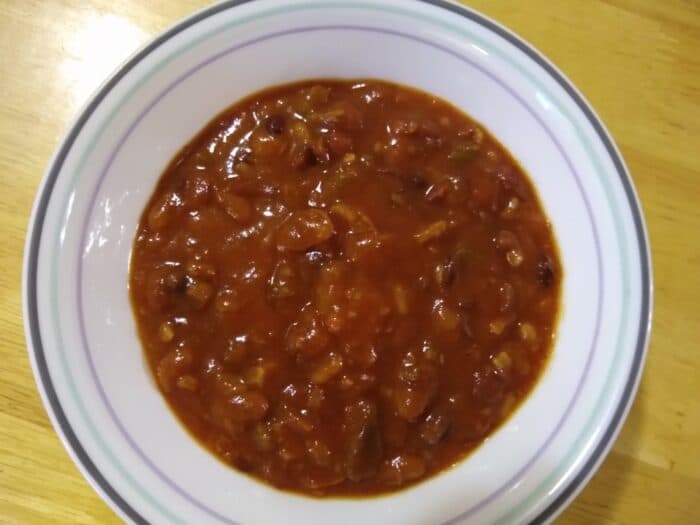 To prepare, bring 7 cups of water to a rolling boil. Whisk in soup mix and 1 can (6 oz.) of tomato paste. Reduce heat to medium and simmer uncovered for 20-25 minutes, stirring occasionally. Add salt and pepper to taste.

For variety, the package says you can add one pound of cooked lean ground beef or ground turkey breast to the prepared chili, along with one can of diced tomatoes and one can of salsa. You can top the soup with shredded cheddar cheese and sour cream.

Aldi’s Chef’s Cupboard soup mixes are helpful on busy nights when you don’t have a lot of energy or time to cook. They’re also good to keep on hand in case of emergencies because they’re shelf stable and most of them require only water to prepare (with the exception of the chili mix, which needs water and a can of tomato paste). You can eat them as they are, or you can fancy them up by adding meat, cheese, or extra veggies. They’re not as good as homemade soup, but they’re not bad either.