Slide sandals have become more trendy in recent years for their ease of putting on and how they hold onto the foot during walking. It’s not uncommon to see people in slide sandals out walking, usually without socks but sometimes with them. I probably see Nike branded sandals the most often, but other companies sell them, too.

During the summer, Aldi rolls out plenty of footwear, including its own take on slide sandals. 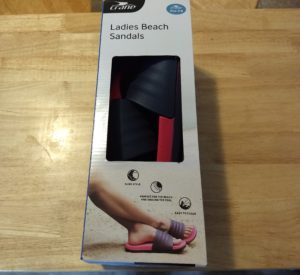 Crane Beach Sandals are an ALDI Find, which means they’re only in stores for a limited time. At the time of this post they cost $7.99, which is less than most other slide sandals we’ve seen. They come in a couple of color varieties and a limited number of sizes. Aldi sold both men’s and women’s versions; we tested the women’s version, the Crane Ladies Beach Sandals. The packaging does not indicate who made them, and they do not come with any warranty or other support information. 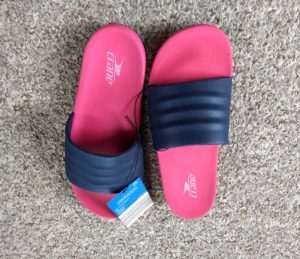 Neither the packaging nor the sandals indicate what kind of material is used to make the sandals, although the inside of the sandal does proudly declare that it’s composed of “all man-made materials,” so there’s that. The strap and insole have a foamy feel to them, while the outsole feels a little more rubbery. The material looks pretty easy to hand clean. 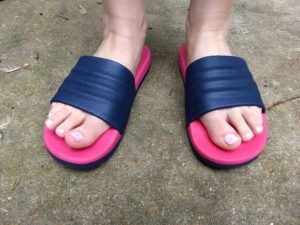 I had two people in my family spend time with the sandals, and they both liked them. One person described them as “pillows for their feet,” saying they were very easy to put on, walk in, and take off. The other also liked them, saying they were easy to wear and walk in. 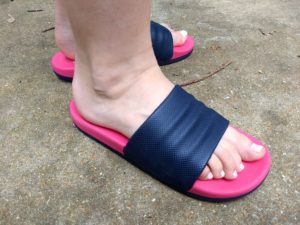 As is pretty much always the case with generic footwear, we don’t know how long these will last. That’s something we’ll keep an eye on and update as necessary. Of course, for this price it may be less of an issue.

At just under $8, Crane Men’s Beach Sandals and Crane Ladies Beach Sandals are inexpensive, comfortable slide sandals for taking to the beach or for going out and about. The jury is out on longevity, but for those looking for sandals in this style, Aldi has something worth taking a look at.