We’ve written before about the wonders of Irish butter, which gets its sweet flavor, high butterfat content, and bright yellow color from cream that comes from cows that graze on Ireland’s rich grassy pastures. Aldi is no stranger to selling Irish butter in various forms. For years, Aldi sold name-brand Kerrygold Irish Butter in stick form and in a softer version in a tub. Within the past year or so, Aldi began transitioning the Kerrygold out of stores and replacing it with its own private label Countryside Creamery Pure Irish Butter in stick form. This fall, for a limited time, Aldi also sold Countryside Creamery Spreadable Irish Butter in a tub. 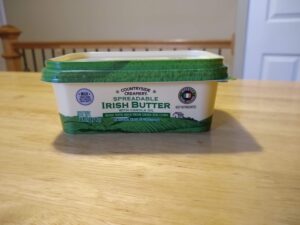 The container states it’s imported from Ireland and made with milk from grass-fed cows, and it contains no artificial colors or preservatives. 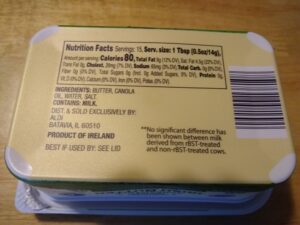 Ingredients are: butter, canola oil, water, and salt. The canola oil is a difference from the Irish stick butter, which makes us think it’s probably added to make the butter easier to spread.

I initially served this butter with warm corn muffins, and my family heartily approved. It’s a rich, creamy butter that perfectly complemented the muffins. The first time I served it, it sat out for 10 to 15 minutes prior to spreading it on the muffins, and it spread easily and melted nicely. I noticed when I used it later to butter bread for grilled cheese sandwiches, though, that it’s not as spreadable straight out of the refrigerator. It spreads best if you allow it to sit out for at least 10 minutes. So it’s perhaps not quite as soft as advertised.

Because of that, and because this butter is a bit pricey for the small-ish amount you get, Aldi’s Regular Buy Irish butter in the stick form is a better deal.

Aldi’s Countryside Creamery Spreadable Irish Butter is rich and creamy and has the taste of traditional Irish butter. I found it is not as soft as I expected, and it is more spreadable after letting the tub sit out for 10 to 15 minutes. It’s a bit expensive, but it costs less than its name-brand spreadable Kerrygold counterpart. While this spreadable butter is in stores for a limited time, you can still buy Aldi’s other Irish butter, Countryside Creamery Pure Irish Butter in a stick form, year round.