EDITOR’S NOTE 2: Since we reached out to Rose Acre Farms and updated this post, we’ve received a number of (sometimes heated) comments for or against the Bible verse on the carton. We understand that people will have different opinions about this subject, but given that this post is primarily about the eggs themselves, we’ve decided that comments related to whether the verse should or should not be there are off-topic according to our Community Guidelines, and will be moderated accordingly. (Also, keep in mind that this site is not run by either Aldi or Rose Acre Farms.)

EDITOR’S NOTE 1: We’ve received more comments and emails about the Bible verse printed on the egg carton — mostly positive, some negative — than the eggs themselves. We decided to reach out to Rose Acre Farms, the egg’s producers, to find out the story behind the verse. Here was the response:

“The Bible verse came about on our cartons from our founder, David W. Rust, who held that verse special to him through out his life. He had it placed on Rose Acre Farms egg cartons in 1980, where it has remained to this day! It has always garnered letters of sincere appreciation from customers all across the USA as a positive message of hope.”

The verse in question, Psalms 118:24, is also prominently displayed on the Rose Acre Farms website.

In the 1970s, there was a great scare over eggs. Eggs were high in cholesterol, we were told, and government guidelines told us that too many eggs could lead to higher cholesterol, which in turn would lead to greater risk for heart disease.

However, in recent years, eggs have enjoyed some vindication. Part of the reason is because we’ve learned that just because we take in a product with cholesterol doesn’t mean our body turns it into cholesterol. In fact, research seems to indicate having an egg a day can actually have benefits, and that foods high in sugar or transfats may be a bigger cause of cholesterol increase. There are some exceptions to this rule — some doctors warn diabetics to avoid egg yolks, for example — but eggs, eaten in moderation, do not appear to be the heart danger we once thought them to be. (Bacon, sadly, is another matter.)

Eggs, though, can be costly. But not if you get them from Aldi. 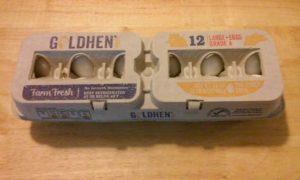 Goldhen Eggs come in your standard carton of a dozen Grade A large eggs. The carton is made of “100% reclaimed paper” and is recyclable (or compostable)*. According to the packaging, the eggs are certified by the United Egg Producers, which means, among other things, that there are no growth hormones and that farmers follow certain standards of animal care. The packaging also warns to keep the eggs refrigerated at or below 45 degrees, something common to store-bought eggs.

The carton notes that the eggs are produced in Seymour, Indiana. A quick search of the address reveals the source to be Rose Acre Farms, one of the largest egg producers in the United States. 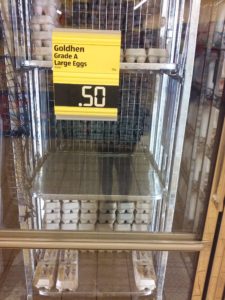 This is why Aldi eggs are awesome.

Prices vary, but we’ve seen them as cheap as 50 cents a dozen — or about 4 cents an egg — and some people we know have reported them even cheaper than that. Eating the $5 discount breakfast at your local restaurant might seem like a deal, but not when you can cook up two eggs on your own skillet for as much as 98.4% less. (Aldi toast isn’t expensive, either.)

Goldhen Eggs are one of the biggest no-brainers at Aldi. They’re inexpensive, quality eggs that do whatever you need them to at breakfast, or even outside of breakfast. Highly recommended.

* A few years ago Aldi Reviewer’s Rachael noticed that Aldi eggs were suddenly coming in Styrofoam rather than the recyclable (and compostable) paper carton. She contacted Aldi, and Aldi told her that the reason for the change was because of a fire that damaged the factory where the cardboard cartons were manufactured. Fortunately, Aldi was soon able to resume selling their eggs in the original packaging, which they continue to do at the time of this post.