Our experiences with Aldi breakfast foods have been mostly positive; we think Aldi can do a pretty legitimate imitation of a fast food breakfast. From the eggs to the hash browns, Aldi has a good selection for the first meal of the day.

When it comes to breakfast sandwiches, we prefer to assemble them ourselves, baking the biscuits (or toasting the muffins), heating up the sausage patties, and adding the cheese. But sometimes life doesn’t allow for that kind of pace, and in those instances Aldi carries a variety of ready-made, heat-and-serve sandwiches. Some of Aldi’s sandwiches are sold through the Fit & Active house brand, while others are sold through the Breakfast Best brand. The Breakfast Best sandwiches, at the time of this post, included a ham, egg, and cheese muffin and a sausage, egg, and cheese biscuit.

We took a look at the sausage, egg, and cheese biscuit. 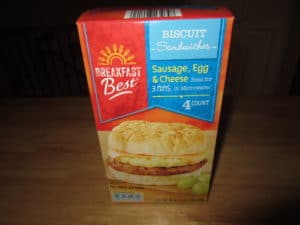 The Breakfast Best Sausage, Egg, and Cheese Biscuit, found in the frozen section, is sold in a box containing four sandwiches. They retailed for $3.49, or about 85 cents a sandwich. This is more expensive than it would cost to make them yourself, but it’s also considerably less than most fast food restaurants. They come wrapped in individual plastic bags.

A microwave is required to make these; there are no other cooking instructions. (The microwave instructions are based on a 1000 watt microwave) Cooking them involves, first, pulling the sandwich out of the plastic wrapper and wrapping it in a paper towel. This little detail is important, because if the sandwich isn’t properly wrapped, it will dry out and get stone-hard when you pull it out of the microwave. Because a paper towel can come unwrapped during cooking, and because you also have to flip the sandwich during the cooking process, I like to put a small piece of clear tape over the paper towel to hold it in place.

Be careful when you remove the sandwich from the paper towel, as it will be hot. Also, the cheese tends to stick a little to the paper towel; this is something I’ve seen with other frozen sandwiches, and short of trying to fold it inside the biscuit before cooking, it’s difficult to avoid.

Tastewise, the sandwiches are fine. The egg, cheese, and sausage are all pretty good, as is the biscuit. The sandwich isn’t huge, but it’s large enough and filling enough for a modest breakfast, and of course it can easily be paired with other breakfast fare if you need something more substantial. 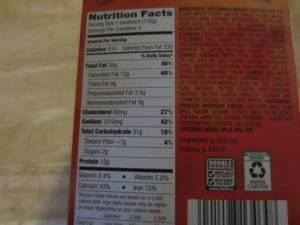 These sandwiches taste pretty good and heat up in just 3 minutes, but they’re high in fat and sodium and the cooking requirements involve fiddling with your microwave cooking power. We prefer to make our sandwiches ourselves, but if that’s not an option these can work in a pinch.