When I initially tried the Ambiano Stainless Steel Deep Fryer, one of the first orders of business was to fill it with oil. At the time, the default option was what I had on hand: Carlini Pure Vegetable Oil. Vegetable Oil is cheap, has a high smoke point (an important factor in deep fryer oil), and is generally neutral in taste, meaning that the only thing you typically taste after frying food in it is the food itself. This is one reason I’ve been reluctant to use supposedly healthier oils like coconut oil.

However, I also learned that a few restaurants, including Chik-fil-A and Jimmy Johns, use peanut oil in their deep frying, and there are some cooks who swear by the stuff. Because of that, I decided to try peanut oil when it made its way to Aldi’s limited-stock shelves. 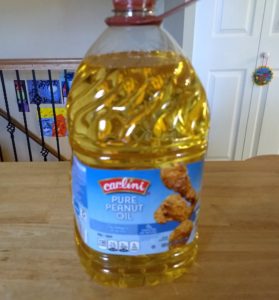 Carlini Pure Peanut Oil is a Seasonal Favorite, meaning it appears on Aldi shelves for longer than a typical ALDI Find, but it is not a permanent Regular Buy. It retails for $9.89 for one gallon (128 oz.) at the time of publication. At 7.7 cents an ounce, this is over twice the cost per ounce than a comparable amount of Carlini Pure Vegetable Oil, but it is also a fair bit less than peanut oil found at other grocers, including Walmart, which runs about $2 more a gallon at the time of this post.

According to the label, the oil is sourced from a number of countries, including “Argentina, India, Nicaragua, Senegal, and the USA.” This peanut oil doesn’t say whether it’s refined or not, but it appears to be refined. This means that some of the health benefits have been stripped out, but I didn’t notice any allergen warnings on the jug, and the peanut industry claims refined peanut oil is allergen free. I’m not sure I’d risk it if I had allergic individuals in the household, and we don’t have any peanut allergies in our home.

There isn’t much to this stuff. To use it, I poured it in my deep fryer and cooked with it, primarily with things like French fries, onion rings, and hash browns. There did seem to be a bit of a taste difference between peanut oil and vegetable oil, but it was slight, and the things we cooked in peanut oil tasted good. The consensus online is that peanut oil is also good for Asian foods like stir fry, although I didn’t try using it in that capacity.

The nutrition information is, like vegetable oil, not an altogether positive experience. There’s a lot of fat, of course. From what I’ve gathered, peanut oil has a range of nutritional pros and cons, but what’s less clear to me is to what degree, if any, peanut oil is “healthier” than cheaper vegetable oil. I’m not sure, and I didn’t find the internet to be altogether helpful in answering that question. 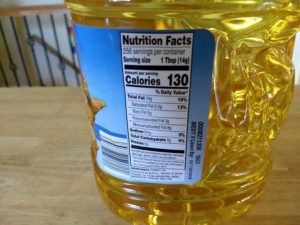 As far as peanut oils go, this seems to be a pretty good price for it, especially compared to other local grocers in my area. I’m still not sure if it’s nutritionally or practically superior to cheaper vegetable oil options, but for those looking for peanut oil for home use, Aldi carries it during certain times of year, and for less than anyone else that we saw.