Ginger is a flowering plant from China. It is well-known for its medicinal benefits, established by science. It is a popular component of many beverages, including the cult favorite kombucha and the legendary ginger ale.

In other words, ginger beer is a kind of beer, while ginger ale is a kind of soda. Both are carbonated and both have ginger, but the differences in preparation lead to different beverages. 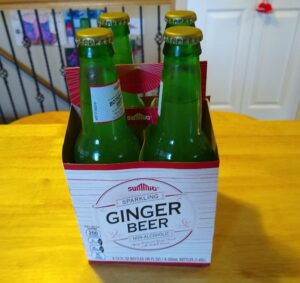 Summit Sparkling Ginger Beer is sold at Aldi for $2.99 for a pack of four 12-ounce bottles. It’s a Seasonal Favorite, meaning it’s available in stores for extended periods through select seasons. (In our area it is in stores around the Christmas holiday.) We typically find it nestled among the other carbonated beverages in the store, such as the sodas. It’s stored at room temperature in-store, but you’ll want to refrigerate it before consuming.

This brew is, as the bottle and packaging clearly note, a non-alcoholic concoction.

To crack it open, you’ll need a bottle opener. 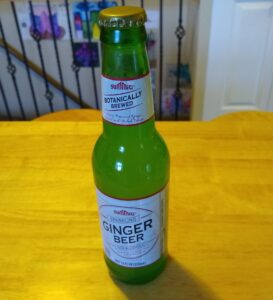 If you’ve never had ginger beer before, you may be wondering how it tastes compared to ginger ale. The answer is that it’s significantly different.

Two, the ginger beer has more of a burn going down. I thought the burn got stronger as I drank more, but suffice to say that it does more to the throat. If you like some burn in your drink you’ll like this; if you prefer something mild and smooth, this is not it.

Nutritionally, ginger beer is a typical carbonated beverage, with a high sugar content. 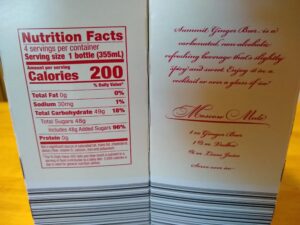 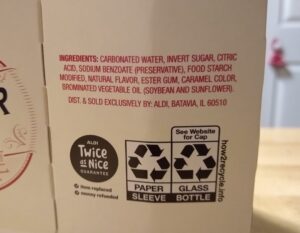 So, what’s the deal?

Apparently there are different kinds of products that fall under the umbrella of ginger beer, and in the non-alcoholic versions, ginger may not be a component. Coca-Cola, for example, makes a non-alcoholic ginger beer popular in east Africa called Stoney that, as best as we can tell, doesn’t contain any ginger.

In other words, some ginger beer is an authentic ginger beer, while other varieties are more of a ginger beer soft drink that adds flavors to imitate ginger beer. The Aldi version looks like it falls in that latter category. We’ll leave it to individual consumers to sort out how they feel about this.

Summit Ginger Beer is a fascinating drink, with a strong ginger flavor and no small amount of burn going down. If that’s your style, then you’ll want to give this a try. On the other hand, if you’re a ginger ale fan and you like a mild beverage, be aware that this isn’t ginger ale. It’s also worth noting that this beverage doesn’t appear to actually have ginger in it, so make of that what you will.