EDITOR’S NOTE: Since publishing this post, we have received many comments from readers complaining about the quality of their bone-in turkey breasts. We decided to buy another turkey breast and try it again to determine if something had changed. You can read our updated thoughts toward the end of this post.

Sometimes you want a traditional turkey dinner without so much … turkey. A turkey is a big bird, and unless you’re hosting a crowd or you have a good-sized freezer to store leftovers, you may not want to cook an entire turkey. Or, perhaps you only want to eat white meat and not dark meat.

Aldi offers some options. In anticipation of holidays such as Easter or Thanksgiving, the discount grocery store sells a variety of turkeys, ranging from whole Butterballs to antibiotic-free turkeys to — for those who want less bird or only the white part of the bird — turkey breasts. You can purchase a bone-in turkey breast that still has a good amount of meat, and it even still looks and feels a little like a whole turkey if you want that traditional aesthetic. 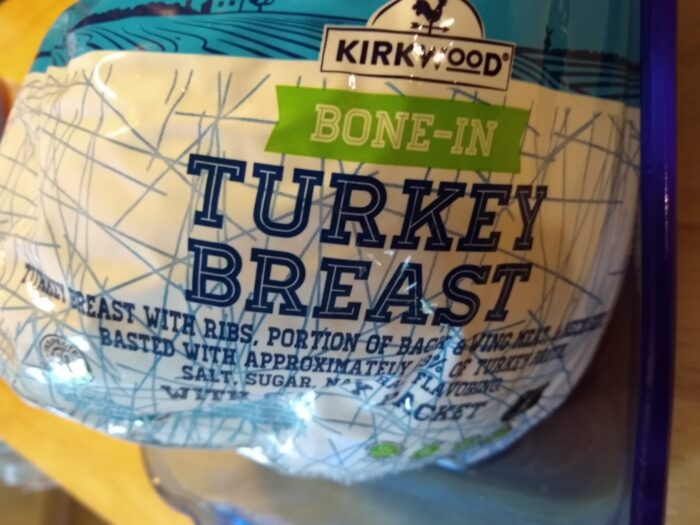 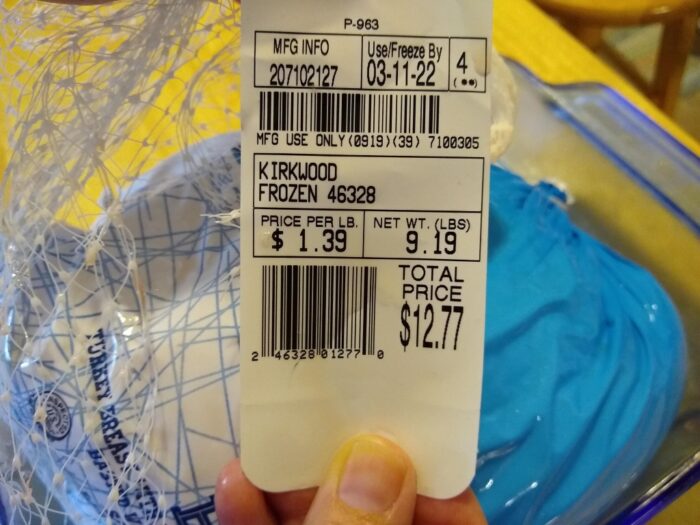 Kirkwood Bone-In Turkey Breast was $1.39 per pound at the time of publication. I bought my 9.19-lb. turkey breast for $12.77. It was sold in the Aldi Find (Special Buy) freezer section, and because it’s an Aldi Find, it is only available for a short time. Turkeys like these usually show up at Aldi just before major holidays. For instance, I bought mine just before Easter.

This is a turkey breast with ribs, portion of back, and wing meat, and neck skin basted with turkey broth, salt, sugar, and natural flavoring. The package does not say where the turkey comes from, but it is likely from the U.S. 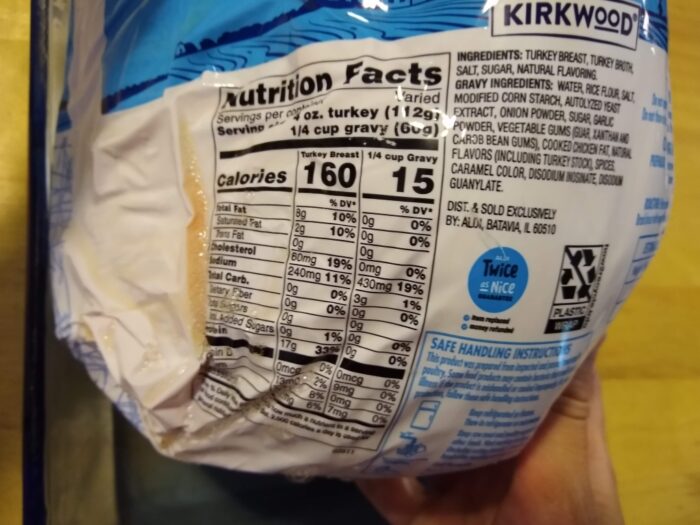 Note: my turkey had a LOT of bloody liquid come out of it as it thawed, making it a messy endeavor when I got it ready to place in a roasting pan in the oven. I’ve never had a cut of meat leak so much liquid during the thawing process. I recommend setting the turkey in a large casserole dish in the refrigerator, and check it periodically to make sure the liquid does not overflow from the dish. 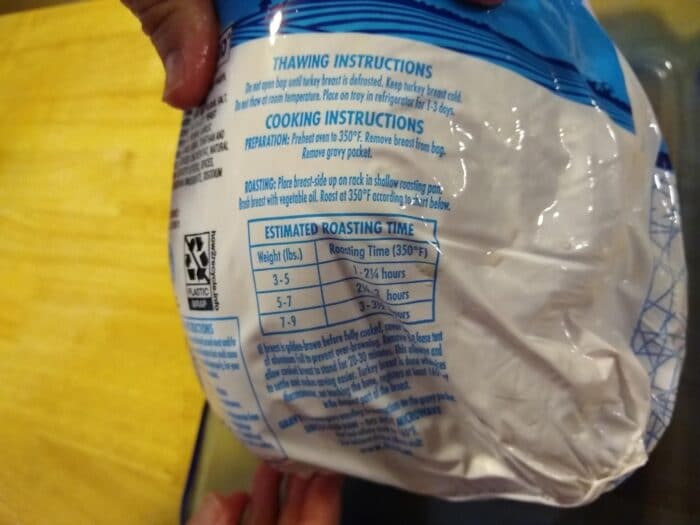 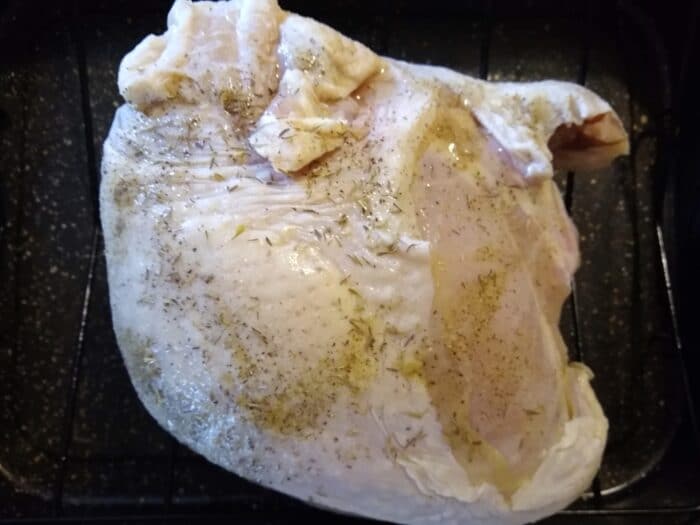 Seasoned with olive oil, salt, pepper, and thyme, and ready to go in the oven.

The package includes a roasting time chart that is dependent on your turkey’s weight.

Cook until the interior of the turkey reaches 165 degrees. If the breast is fully browned before the rest of the turkey is cooked, cover it loosely with a tent of aluminum foil to prevent over-browning. Remove the foil after baking, and allow the cooked turkey breast to stand for 20-30 minutes.

My 9-ish-pound turkey breast was plenty done after 3 hours in the oven, and it browned nicely without needing a foil tent. 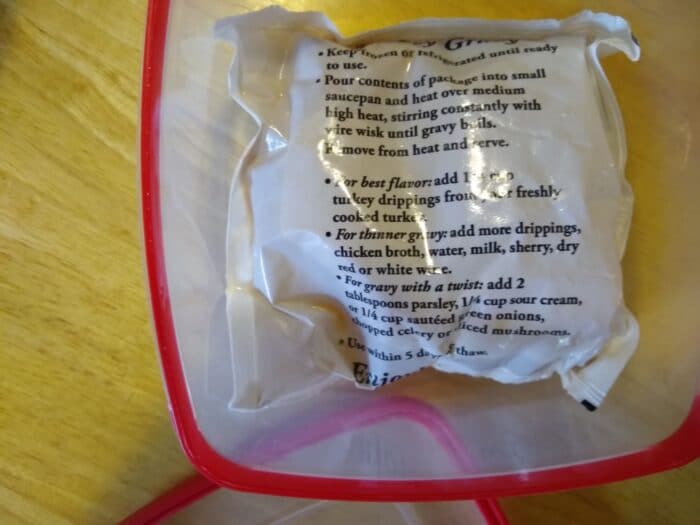 To prepare the gravy, pour contents of the package into a small saucepan and heat on medium high heat, stirring constantly with a wire whisk until the gravy boils. For best flavor, add 1/4 cup of turkey drippings from your freshly cooked turkey. For thinner gravy, add more drippings, chicken broth, water, milk, sherry, dry red or dry white wine. For gravy with a twist, add 2 tablespoons parsley, 1/4 cup sour cream, or 1/4 cup sauteed green onions, chopped celery, or sliced mushrooms. The package says to use the gravy within five days of thawing. 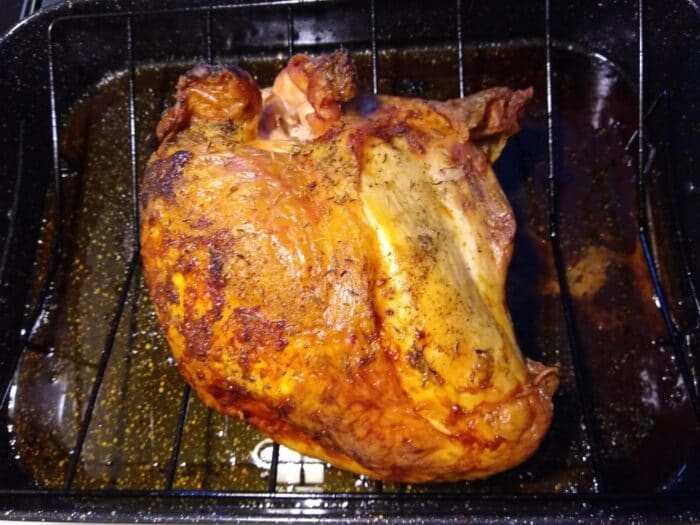 The finished turkey breast, fresh out of the oven.

I served this turkey breast alongside some of Aldi’s Hawaiian stuffing, instant mashed potatoes, and green bean casserole. It was tender and flavorful for a turkey breast, and, if you like to nibble on poultry skin like I do while carving the bird, the skin cooked up nice and crisp and salty. The gravy was on the thinner side, but I didn’t stir it as much as I probably should have while it was heating, and I don’t know if that affected thickness. It still tasted rich and savory and no one seemed to mind much.

There also was plenty of meat for leftovers. After feeding dinner to my family of four, we still had a mostly full 2.5-quart dish of meat. I’ll be packing some of the meat up to freeze and save for casseroles later, and I froze the partial turkey carcass to make stock with as well.

And if this turkey breast is still too much meat for you, you can always go with Aldi’s cornish game hens instead.

UPDATE (4/12/2022) — After receiving many comments from readers alleging that their bone-in turkey breasts were fatty, tough, game-like, or otherwise inedible, we purchased another bone-in turkey breast from Aldi this spring to see if something was different about the birds currently in stores. 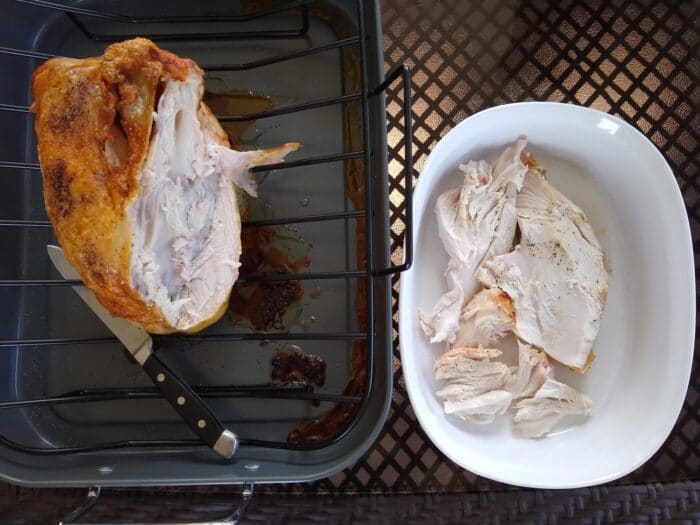 We found two gravy packets inside our turkey instead of one packet, and the gravy is still as thin as ever with these turkeys. We roasted the turkey in our oven following the standard directions on the package, and it turned out as we would expect turkey to turn out. It wasn’t any fattier than other birds we’ve cooked, and it had a similar taste and texture to other turkeys we’ve cooked. As far as we can tell, it’s not really different from the turkey we roasted the first time around.

Being longtime Aldi shoppers, one thing we have learned is that your mileage may vary with certain Aldi products depending on what region you live in. It’s possible Aldi may source their bone-in turkey breasts from different regional suppliers, so what kind of turkey you get might depend on what kind of stock your local store receives.

The Kirkwood Bone-In Turkey Breast is a good option if you don’t want to cook a whole turkey or if you want to stick with white meat over dark. It made for a nice family dinner in our house.