Just about everyone likes tacos. They’re easy to make and versatile in terms of fillings. When I was growing up, my family’s taco nights were pretty simple: crunchy taco shells, or sometimes flour tortillas, ground turkey seasoned with a packet, and salsa, shredded cheese, shredded lettuce, and sour cream. However, for a more authentic taco experience, street tacos are worth trying.

What is a street taco? Street tacos are made with corn tortillas and they’re smaller than the tacos most Americans are familiar with — small enough you can easily hold a taco in one hand and eat it on the go, which is why it’s called a street taco. They also tend to have simple fillings: meat, maybe some onions or peppers or pico, maybe some cotija cheese, but that’s about it.

If you ever wanted to try street tacos, Aldi recently sold them as a limited-time special. 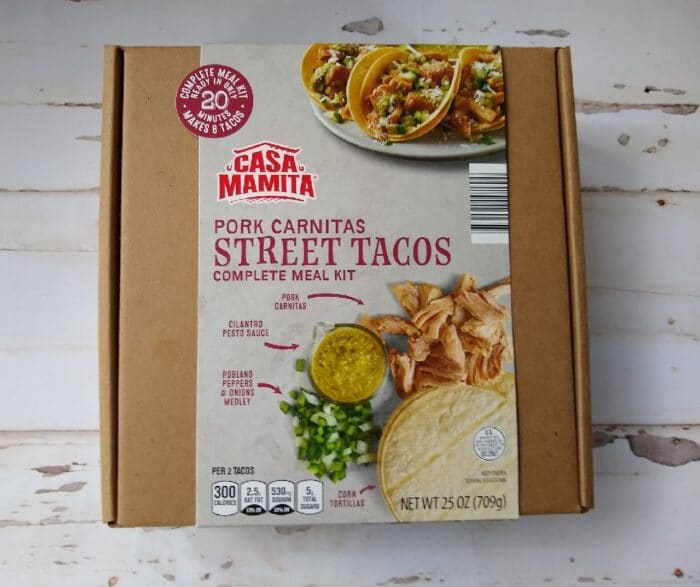 The Casa Mamita Pork Carnitas Street Tacos Complete Meal Kit cost $9.99 at the time of publication. This is a complete meal kit with pork carnitas, poblano peppers and onions, cilantro pesto sauce, and corn tortillas. The kit is sold frozen in a box, and each component is packaged individually in plastic wrap within the box. Aldi also sold a crispy fish taco kit and a chipotle shrimp taco kit for the same cost at the same time. 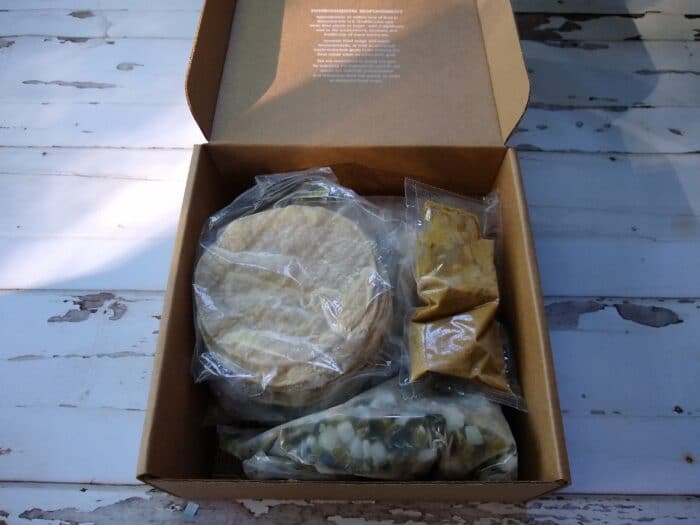 What it looks like when you open the box.

This is an Aldi Find, which means it’s only in stores for a short time. Aldi does not offer online ordering for its specials, so after this sells out at your local store, it’s gone for the time being. 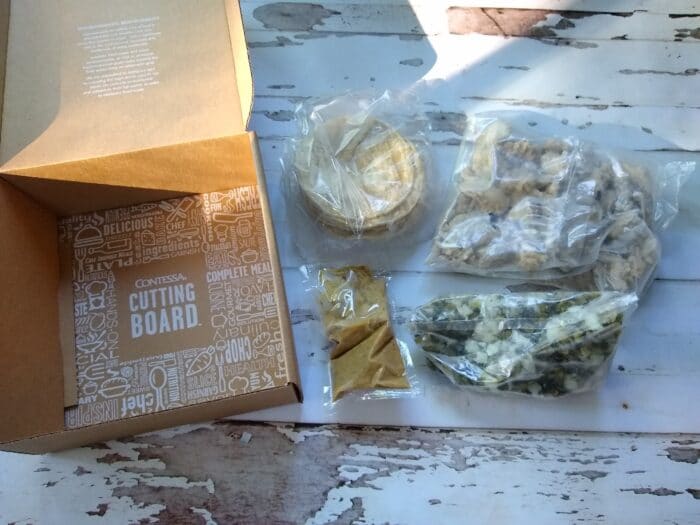 All the meal components out of the box.

When I unboxed this meal kit, I noticed the bottom of the interior of the box says Contessa Cutting Board. A little Googling led me to the site for Aqua Star, which produces a variety of frozen boxed meal kits with fresh ingredients that are pre-portioned with the idea that they cut down on your meal prep and cleanup time, and you’re less likely to have food waste leftover. So this Casa Mamita Aldi house brand meal kit is actually a rebranded Contessa Cutting Board meal, and the Contessa version looks pretty similar to the Aldi version.

I was able to find a Contessa Cutting Board Crispy Fish Street Tacos kit — sold at Aldi under the Casa Mamita brand at the same time as these pork carnitas street tacos — on the website for Publix, so if you like these kinds of meal kits, you might be able to find name-brand versions at other grocers after they sell out at Aldi.

This kit at Aldi comes with enough food to serve four people, with two tacos per person. Because they’re street tacos they are small, so depending on how hungry you are, you may want to serve other sides such as chips and salsa or some of the other items Aldi is selling for Cinco de Mayo, such as mini empanadas and corn masa bites. 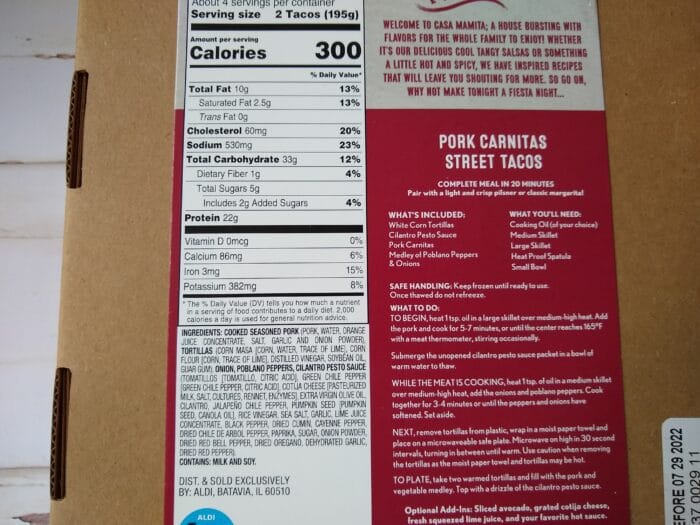 The ingredients are pretty straightforward, with items such as cooked pork seasoned with orange juice concentrate, salt, garlic, and onion powder; corn tortillas made with corn masa; and a sauce made with tomatillos, green chile pepper, cotija cheese, extra virgin olive oil, cilantro, and other ingredients.

If you’re avoiding allergens, this meal has milk and soy.

To prepare these, start by heating 1 teaspoon of oil in a large skillet over medium-high heat. Add the pork and cook for 5-7 minutes, or until the center of the larger pieces reaches 165 degrees Fahrenheit. Stir occasionally.

While the pork is cooking, submerge the cilantro pesto sauce packet in a bowl of warm water to thaw.

Then, heat 1 teaspoon of oil in a medium skillet over medium-high heat and add the onions and peppers. Cook together for 3-4 minutes or until the veggies have softened. Set aside.

To plate, take two warmed tortillas and fill with the pork and the vegetables. Top with a drizzle of the cilantro pesto sauce.

If you want, you can add other toppings such as sliced avocado, grated cotija cheese, fresh squeezed lime juice, or your favorite hot sauce (none of which are included in the kit). 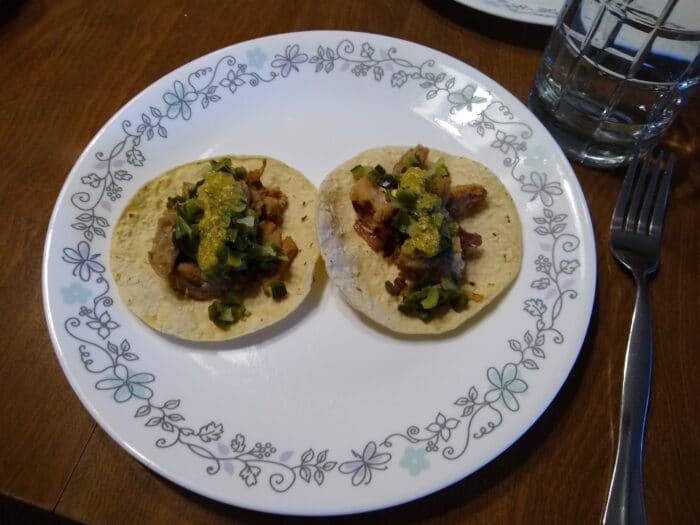 I didn’t read the instructions closely enough and only used one tortilla per taco instead of two. Two tortillas is actually the traditional way to eat street tacos, which just goes to show that we don’t eat street tacos often around here (and we probably need to correct that), but my husband and I liked these tacos. And now we have extra tortillas for breakfast burritos as a result of my mistake. The kids in the family were less enthusiastic about these tacos, preferring crunchy taco shells or different kinds of fillings, but that left more for the grownups.

The meat and veggies were what I expected, and the cilantro pesto sauce has good flavor and some kick but isn’t too spicy. The corn tortillas also held together all right when we folded up our tacos, which can sometimes be a challenge with corn tortillas versus flour tortillas and which is why street tacos typically use two tortillas to help keep everything together. For a frozen meal, I thought this came together well and didn’t look or taste like it had been frozen, and it seems pretty healthy. It’s a bit on the pricey side, but I wouldn’t rule out buying this again at some point.

The Casa Mamita Pork Carnitas Street Tacos Complete Meal Kit is a rebranded Contessa Cutting Board taco meal kit. It’s sold frozen and comes with precooked pork, diced peppers and onions, a cilantro pesto sauce, and corn tortillas, and the meal comes together from freezer to table in about 20 minutes. If you like tacos or want to enjoy a frozen meal that isn’t loaded with processed ingredients, this is a good kit to try. Aldi also sold crispy fish and chipotle shrimp versions of this kit at the same time.