Irish butter is an old tradition, stretching back at least 3,000 years. It differs from typical American butter in that it 1) has a higher butterfat content, 2) has less water content, and 3) is crafted from the milk of grass-fed cows in Ireland. The end product is a butter that has not only a rich, unique flavor but is easier to spread than a typical American butter stick.

Irish butter has something of a cult-like following, thanks in large part to Kerrygold, an Irish butter brand created by Irish agricultural food cooperative Ornua in the 1960s. Kerrygold is sold in many parts of the world, including Europe, and it was first introduced into the United States in 1991. Today, Kerrygold is the second-best-selling branded butter in the U.S. behind Land O’Lakes.

For a time Aldi carried Kerrygold Pure Irish Butter as a Regular Buy, but beginning in 2018 Aldi began to gradually phase Kerrygold out of stores. In its place: Aldi’s own house brand Irish butter. 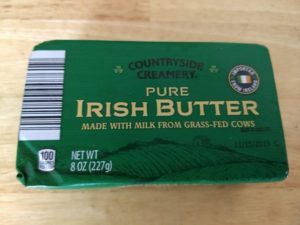 Countryside Creamery Pure Irish Butter is a Regular Buy, meaning you can find it in stores all the time. It comes in an 8-ounce wrapper, which makes it about the same size as two American sticks of butter. The wrapper declares that the butter is a product of Ireland, although it does not specify who manufactures the butter beyond that. Also of note: there are no markings for measurements like you often see on American butter, so you’ll have to figure that out yourself. (I found that pulling out a stick of American butter and placing it next to the Irish butter was an easy way to help me cut proper amounts.)

At the time of this post, Aldi’s Irish butter costs $2.49 for an 8-ounce package, or about 31 cents an ounce. Aldi previously sold the same-sized Kerrygold for $2.85 (36 cents an ounce) — roughly the same price Walmart currently sells it for — so the Aldi Irish butter is a bit cheaper than Kerrygold. Keep in mind, though, that Irish butter in general is more expensive than American butter: Countryside Creamery Sweet Cream Butter, for example, is less than 20 cents an ounce. 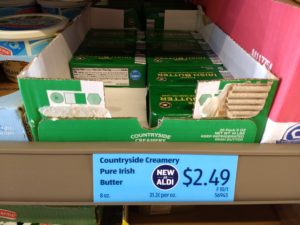 Aldi Irish butter on the shelf. (Click to enlarge.)

Irish butter is advertised as softer than American butter, and on that front the Countryside Creamery Irish butter doesn’t disappoint. It’s pretty easy to cut and use, and it spreads easier than stick butter, too, especially if you give it a couple of minutes to sit out of the refrigerator.

Aldi’s take on Irish butter tastes pretty good. It’s got a rich flavor that reminds us a lot of Kerrygold, and we’ve found it to be excellent for just about every use you’d use butter for, from cooking to toast. (I like adding it to macaroni and cheese.)

In terms of nutrition information, Aldi Irish butter is very similar to Kerrygold. Both have 100 calories per serving, 11 grams of fat, and 30 mg of cholesterol. Aldi Irish butter has 85 mg of sodium, which is actually less than the 100 mg in Kerrygold, although we didn’t personally detect much of a taste difference in terms of saltiness. 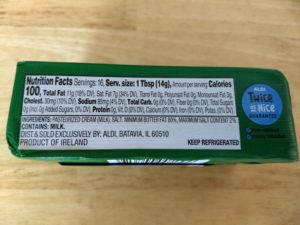