Skip to content
Home Regular Buys Countryside Creamery Half & Half

Countryside Creamery Half & Half

Most of the time, we associate half and half cream with drinking coffee. However, this half-milk, half-heavy whipping cream concoction has a multitude of uses outside of pouring a splash in your morning brew.

It adds richness to soups, quiche, casseroles, and homemade alfredo sauce. Use it in place of milk in your favorite recipes for banana bread, pancakes, other baked goods, macaroni and cheese, and more. Add a dash to your scrambled eggs as they’re cooking. Or, my favorite is to add a splash to my morning cup of tea. I also make a fantastic homemade tomato soup and a skillet tetrazzini that call for half and half.

Aldi sells half and half. It’s found in the refrigerated section near the milk and other dairy products, and it’s a Regular Buy, which means it’s on shelves all year.

It’s available in regular and fat-free varieties, and there is a significant difference between the two in terms of ingredients. Most notably, the fat-free variety contains corn syrup.

Because I believe in the benefits of a diet that includes dairy fat, I only purchase the regular half and half, so that’s primarily what this review deals with, but we’ll take a quick look at the fat-free version as well.

Countryside Creamery Half & Half 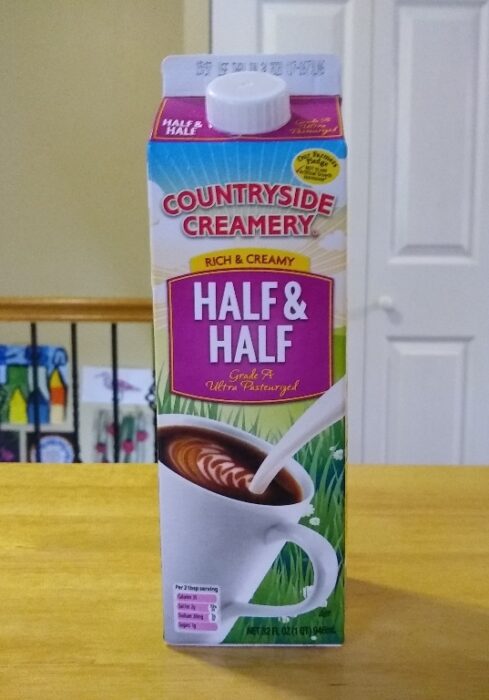 Countryside Creamery Half & Half cost $1.55 for a 32-oz. (1 quart) container (just under 5 cents an ounce) at the time of publication. For comparison, a 32-oz. container of Great Value Half & Half from Walmart cost $1.64 (about 5 cents per ounce) at the time of publication, and a 32-oz. container of Dairy Pure Half & Half from Target cost $3.19 (about 10 cents an ounce). So whether the Aldi half and half is a good deal depends on whether you buy name-brand or store brands, since Aldi and the other store brands are pretty close in price.

The Aldi half and half is Grade A and ultra-pasteurized. It is naturally gluten free and is kosher.

Cream is higher in fat and calories compared to skim milk or processed coffee creamers, but recent science suggests dairy with some fat may actually be good for you. Half and half holds the middle ground; it’s not as rich as heavy whipping cream but not as lean as skim milk. A diet that’s a little higher in fat may make weight loss easier because fat is more filling and helps reduce appetite. 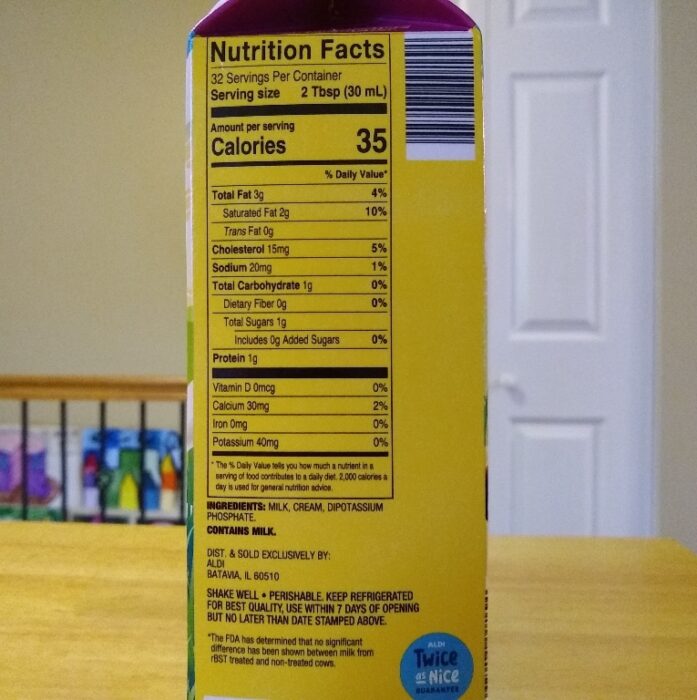 Shake the carton well before using. It should be kept refrigerated. For best quality, use within seven days of opening, but no later than the date stamped above. I bought my most recent carton of half and half in early May, and it had a best-by date of June 24, 2020. If you ever need ideas for using up a carton, visit our sister site, A Well Advised Life, for ideas about what to do with leftover half and half cream.

Countryside Creamery Fat Free Half & Half 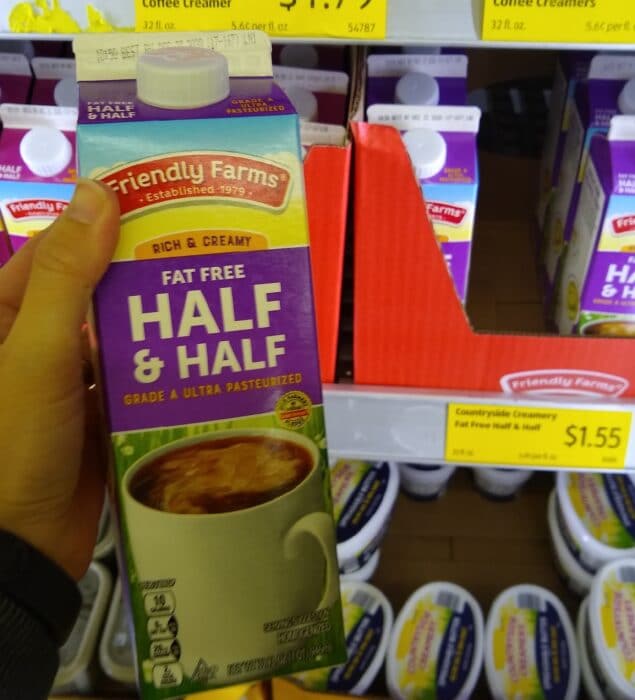 Countryside Creamery Fat Free Half & Half also cost $1.55 at the time of publication. It’s Grade A and ultra pasteurized.

As mentioned above, I generally don’t buy fat free or low fat variations of anything, whether it’s half and half, sour cream, or milk. In the case of this fat-free half and half, it’s off putting to see that it contains corn syrup, which seems like an ingredient that should not belong in half and half.

If going fat free is important to you, maybe the corn syrup doesn’t bother you, but I’ll be sticking with the full-fat half and half version.

Aldi half and half adds richness to coffee, tea, soups, sauces, and more. It is available in regular and fat-free varieties, although the fat-free version contains corn syrup. I buy the regular version, and it works as well as any name-brand half and half.