EDITOR’S NOTE: Aldi uses different local sources for its milk. As a result, the milk cartons can look different in different areas. Some of those cartons can be more difficult to open than others.

In the 1980s, the dairy industry launched a campaign to convince America that milk does a body good. In recent years, milk has become a flashpoint for debate, both in terms of its health benefits and the conditions in which America’s dairy cattle are raised.

Although there is disagreement on the topic, much of the current evidence suggests that, while there are some drawbacks to milk, it is on balance a source of more nutrients than many other foods. What’s more, whole milk, which for decades was seen as less healthy than skim or 2%, has now seen a comeback thanks to a series of studies that have shown that whole milk may, in fact, be healthier than lower-fat milk … including, astonishingly, evidence that full-fat dairy may reduce the risk of diabetes and obesity. (Right now, most schools still carry 2% or skim milk.)

Aldi, like virtually all grocers, carries milk, including whole milk. 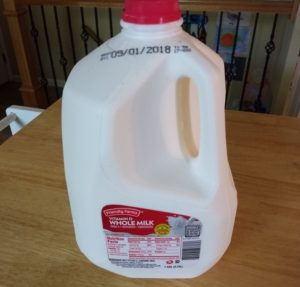 Friendly Farms Whole Milk, a staple Regular Buy, comes in the familiar one-gallon jug. (Our local Aldi stores also sell half-gallon containers of milk, including whole milk.) The price of milk at Aldi varies, and while it’s usually cheaper than generic milk at other stores, that’s not always the case, so you might want to do a bit of price comparison.

Aldi’s whole milk carries a “no artificial growth hormones pledge,” although there isn’t much detail on where Aldi’s milk is sourced. The ingredients are just two: milk and Mitamin D3. 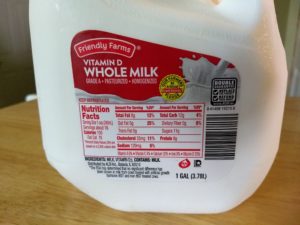 The nutrition information is more or less what you’d see on any other whole milk gallon. On its face, whole milk has a fair amount of calories and fat, although, as I noted earlier, there are studies that indicate that this may not be as much of a concern as we once thought it to be.

In terms of how Aldi milk compares to other milk: as far as I can tell, it’s all about the same. Aldi milk, whole or skim, tastes just like any other whole milk I’ve purchased, be it store brand or a regional name like the Illinois-based Prairie Farms. The milk seems, on balance, to last about as long as other milks I’ve purchased … which is to say it’s unpredictable. I never know from jug to jug whether the milk inside will go bad a few days before the expiration date or days afterward. This has been true of Aldi just as it’s been true of milk I’ve bought from other stores. I can say, though, that Aldi milk tends to be on par, and that the milk I find at Aldi usually has expiration dates as far into the future as other stores I’ve been to.

As it does with other staples, like bread and eggs, Aldi delivers milk that looks and tastes just like its competitors, and usually (although not always) for a better price. Aldi also sells it in gallon and half-gallon sizes.