A splash poured into a cup of coffee or tea changes an ordinary drink into something smooth and decadent, and cream has no added sugar and is less processed compared to most commercial coffee creamers.

Heavy whipping cream also adds rich creaminess to soups and sauces, and it’s the base for making your own homemade whipped cream or caramel sauce or ricotta cheese.

Cream is higher in fat and calories compared to skim milk or processed coffee creamers, but there is evidence to suggest full-fat dairy is not as bad for you as was once believed, and it may actually have some benefits. It’s associated with lower weight and reduced risk of diabetes, and it raises levels of good cholesterol, so you can drop a carton of heavy whipping cream in your shopping cart guilt-free. 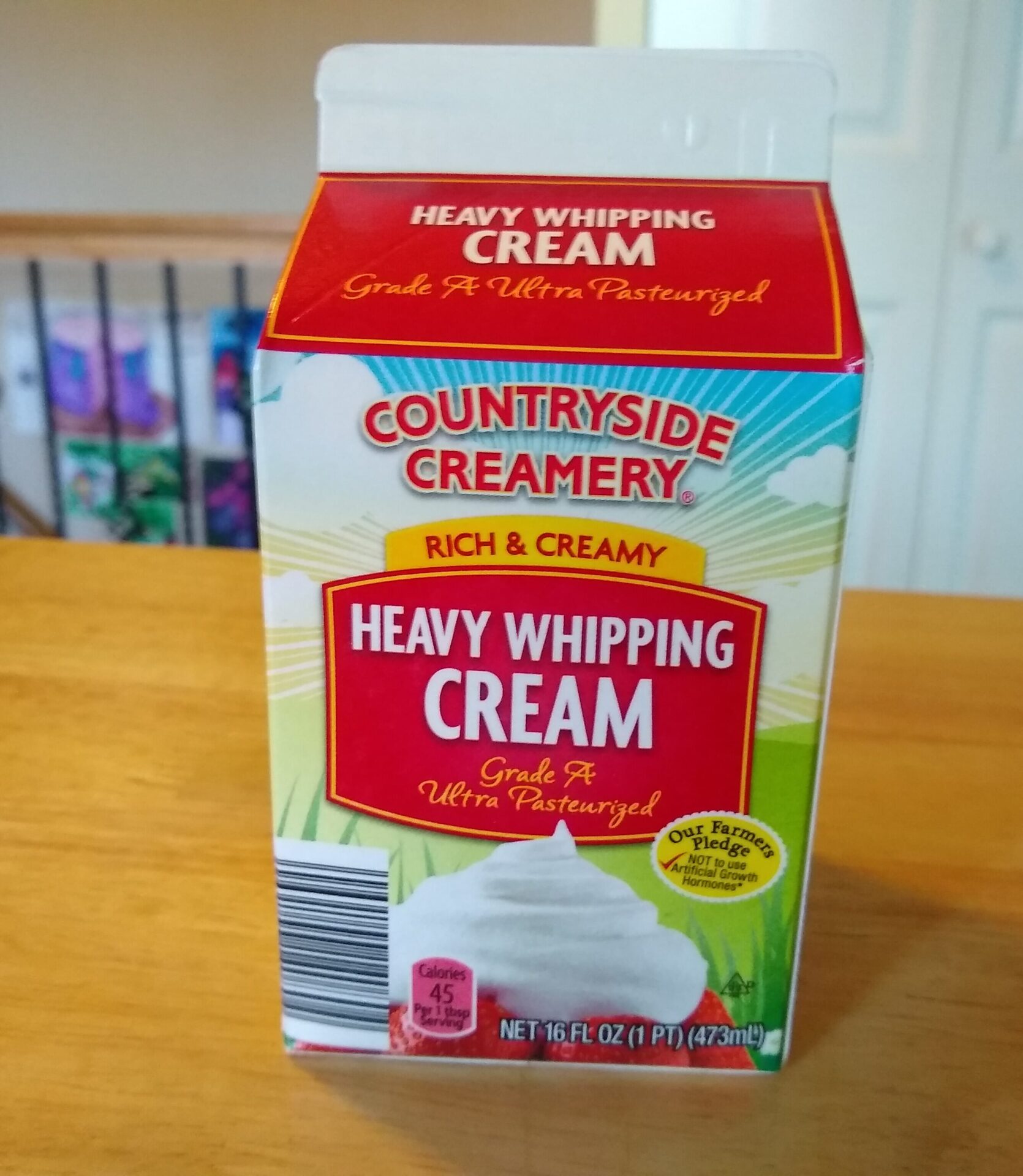 Countryside Creamery Heavy Whipping Cream cost $1.39 for a 16-fluid-ounce carton (just under 9 cents per ounce) at the time of publication. At this time, Aldi only sells heavy whipping cream in 16-oz. containers. For comparison, Walmart sold Great Value brand heavy whipping cream in a larger 32-oz. carton for $3.12 (about 10 cents per ounce) at the time of writing, so if you prefer to buy larger cartons and go with other store brands, the price savings at Aldi may be marginal.

Aldi’s heavy whipping cream is Grade A and ultra pasteurized, and it’s found in Aldi’s refrigerated section near the other dairy products and dairy substitutes. The most recent carton I purchased had a best-by date about two months out from my purchase date. The carton advises not to freeze and to use within seven days of opening. (While I’ve never tried it, some people say heavy whipping cream can be frozen without losing much in the way of quality.) 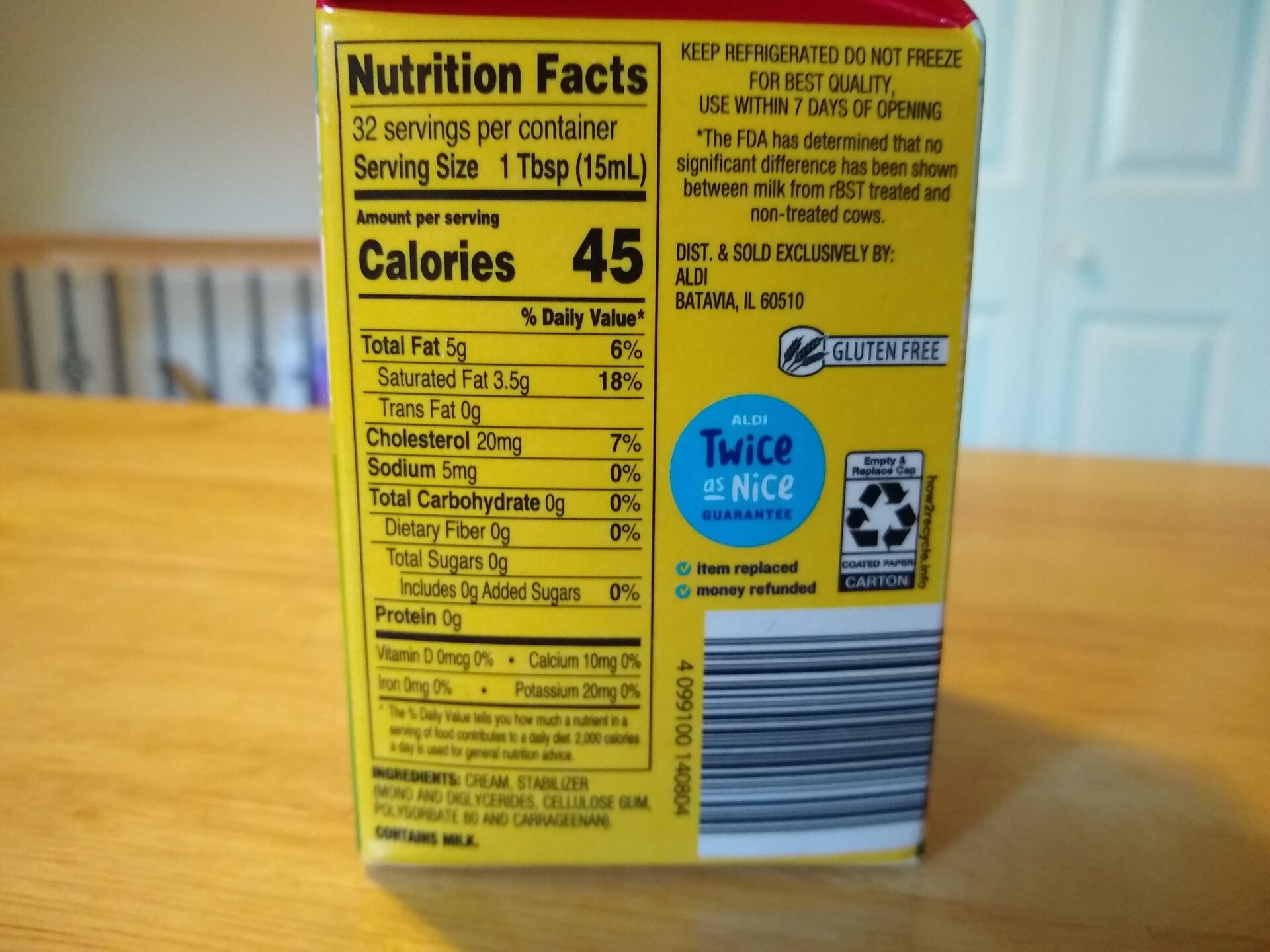 Ingredients are cream and stabilizer (mono and diglycerides, cellulose gum, polysorbate 80, and carageenan).

Even though cream seems like a food that should be whole and minimally processed, it does include additives that help it to retain a thick and smooth texture. This is the case with pretty much every brand of heavy whipping cream regardless of the brand or the store where you purchase it, short of perhaps buying your own cream directly from a local dairy farmer.

If you’re watching out for allergens, heavy whipping cream contains (no surprise) milk. It is naturally gluten free.

Heavy whipping cream is naturally high in calories and fat. One 1-tablespoon serving has 45 calories, 5 grams of total fat (6% DV), and 3.5 grams of saturated fat (18% DV).

For comparison, Aldi’s Countryside Creamery Half & Half has 35 calories in a larger 2-tablespoon serving, with 3 grams of total fat and 2 grams of saturated fat.

The fat breakdown for common dairy products goes like this, according to The Spruce Eats:

In some recipes, you can opt for heavy whipping cream’s cousin — the less indulgent but lower-calorie and lower-fat half and half cream, which Aldi also sells and which is actually just equal parts milk and heavy cream. Just know that if you’re making your own whipped cream, you need to stick with heavy whipping cream.

I’ve been purchasing Countryside Creamery Heavy Whipping Cream from Aldi for years and using it in tea, soups, sauces, and desserts. Aldi’s heavy whipping cream works as well as any of brand of heavy whipping cream, and it’s slightly cheaper, so it will continue to be a go-to ingredient in my kitchen.

In addition, if you have leftover cream after making a recipe, you can find ways to use up heavy whipping cream at our sister site, A Well Advised Life.