UPDATE (December 2018): Despite my early concerns about durability, after two years these gloves have held up well with use. I’ve come to really appreciate them as my “midrange” gloves, for those times when I need some finger flexibility but still want warmth.

Finding a good pair of quality waterproof winter gloves has been an odyssey for me. My problem is that I don’t want to pay a lot, and that severely cramps my options. I’ve tried buying cheap gloves online (terrific fail), buying them from the hardware store (meh), and shopping around to find them in store (pricey).

And then I saw them on the shelf at a certain grocer for $7. Aldi, for a small-inventory store, you somehow find a way to sell everything. 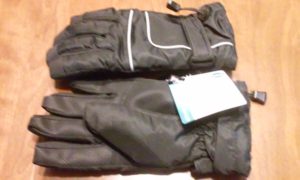 Crane Men’s Winter Gloves and Crane Women’s Winter Gloves are, as the name implies, winter gloves. I would describe them as “medium” strength winter gloves: they’re not as fat and thick as some of the bulkier gloves, but they’re not thin ones you can use your phone with, either. The packaging describes them as waterproof, breathable, and water resistant. (Yeah, I had to read it twice, too.) They come in multiple sizes and a few different trim colors, although when I bought them they were mostly just black with small differences in accent.

The gloves come with adjustable Velcro as well as an easy-to-use drawstring that can be adjusted with a small spring-loaded mechanism. They also come with a simple pinch-style clip for clasping together. One other convenience note: they are machine washable (cold), although they have to be line dried.

To the most important question: how do they do with moisture and cold? On the moisture front, they seem to do fine. They probably won’t keep you dry diving your hands into a bucket of cold water, but they handle snow and the like okay.

On the cold front, the gloves contain Thinsulate insulation, the patented stuff designed to keep gloves warm in cold temperatures. In my experience, this is important — I’ve learned the hard way how bad knock-off insulation can be — but I’ve also learned that not all gloves with Thinsulate are the same. Some contain more than others, and gloves that have more insulation often have the trade-off of being bulkier and less flexible around the fingers.

These are not the thinnest Thinsulate gloves I’ve ever used, but they’re not the thickest, either. They provide satisfactory warmth for short periods of time, and they are flexible enough that you can do a fair amount with them on. They’re not really made for long periods of time in the cold, though; during a recent snap where the temperature was in the teens, I found my fingers getting cold after about 10-15 minutes outside. They’re probably better suited to outdoor use when the temperatures are in the 30s or 40s, but they’ll do for small periods of time in more frigid temperatures.

One other thing: we’re not sure about durability. During our first few days with them we noticed a little bit of fraying around the drawstring that tightens the cuff, as well as a stray thread along the trim. This may mean nothing, or it may mean a lot. Since then the amount of wear doesn’t seem to have grown appreciably, but we’re still not positive how long these are meant to last.

Crane Men’s and Women’s Winter Gloves are waterproof, they’re Thinsulate, and they’re $7, which is not a bad combination in our view. On the other hand, they have shown some initial wear that leaves us wondering how long they’ll last, and we found them to be merely adequate when the temperatures dropped below freezing. Still, if you need something for short periods of cold, these are worth a look.