Aldi’s Ambiano stand mixer is a cheaper alternative to name-brand mixers. My husband and I do a lot of cooking, and this mixer works fine for average home cooks and bakers. We use it for the occasional mashed potatoes, quick bread batter, and cookie dough. However, if you are a hardcore baker who makes a lot of homemade rolls and bread, you’ll probably want to fork over the money for a high-end KitchenAid. 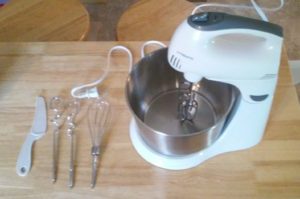 The Ambiano 4 Quart Stand Mixer has 5 speed settings with a turbo boost feature that increases speed by 15% when you push the button. The mixer comes with 2 beaters, 2 dough hooks, and a whisk that attach to the mixer, plus a 4-quart metal mixing bowl. The mixer detaches from the stand and can be used as a hand mixer. It also includes a small plastic knife, presumably to be used like a spatula to scrape the sides of the mixing bowl, although the manual isn’t clear on its purpose.

The stand itself is lightweight, doesn’t take up too much space, and attaches to your counter with suction cup feet. The bowl does not turn automatically, but a shallow lip around the edge of the stand keeps the bowl from sliding off and allows you to easily turn it manually.

This mixer is easy to use, and I like the turbo boost feature that temporarily increases the speed. I mixed up some pumpkin bread batter and it didn’t seem to splatter ingredients out of the bowl as much as my old Cuisinart hand mixer.

I also like how the stand is lightweight but stays in place with suction cups. It stays put regardless of how full the bowl is or whether it’s being used as a stand mixer or if the mixer is detached to finish things up.

One other pro: the mixer is backed by a 2-year warranty, so if things go wrong you do have some options. Just be sure to hold on to your receipt.

The 4-quart mixing bowl is larger than it appears to be, but it has been a little small for some of our cooking projects. It was too small when I made pumpkin bread, but to be fair, my recipe makes 3 loaves at a time. I solved the problem by detaching the mixer from the stand and using a different, larger bowl.

In addition, our time with the bowl also revealed another drawback. After my husband finished mixing the potatoes, we noticed the beaters left some scuff marks on the bottom of the metal bowl. The scuffs seemed to mostly come from when he was using it on the stand, although some of them along the edges also came from after he’d detached it. Regardless, this is not a bowl that seems made for a lot of punishment … at least, not without showing it.

The beaters don’t seem to attach to the mixer as securely as they should, but so far we haven’t had problems with the beaters falling out. I also noticed the power switch with the 5 speed settings also serves as the ejector button for the beaters, depending on how you manipulate the button/switch. It’s a little creepy, but again, no problems so far.

Aldi’s Ambiano 4 Quart Stand Mixer is not the same as a high-end KitchenAid mixer. The stand is lightweight (although secured well enough by suction cups), the bowl is easily scuffed, and the whole apparatus doesn’t feel as substantial as name-brand options. That said, you’ll have a hard time finding a set cheaper than this one, and it is backed by a 2-year warranty. If you do a lot of mixing, you’ll probably want to look at something more high end, but if you only need a mixer every once in a while, this is worth a look.