EDITOR’S NOTE: Most of the comments on this post come from readers trying to find the Holiday Teas. The Holiday Teas, at least right now, are an ALDI Find (Special Buy), which means that Aldi only stocks a limited amount in a one-week window during the winter holidays, and once that supply is gone, it’s gone, probably until the next year. At this point Aldi doesn’t sell their products online, in or out of season, so if you can’t find it in stores, you’ll likely have to either 1) search for it at other grocery stores (which may or may not have these flavors under different brand names) or 2) wait until next year. If you wish Aldi carried them more often or you want to let Aldi know how you think, you can contact the grocer here.

While making my way to the checkout line at Aldi recently, I noticed some nontraditional flavored teas for sale. Aldi tends to be very traditional in this department, with mostly English Breakfast Tea and green tea among its Regular Buys, and Aldi occasionally sells some other flavors as Special Buys (ALDI Finds). I drink a cup of tea almost every morning, and I love new and unique flavors, so I end up buying a lot of my tea at other stores.

When Aldi recently carried some new selections as part of its ALDI Finds (Special Buys), I put one of each flavor in my cart. 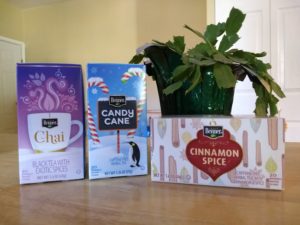 Let’s take a look at the Special Buy offerings: 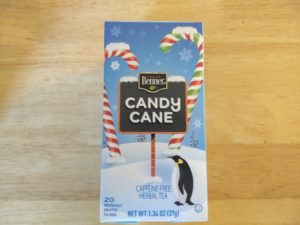 This is a caffeine-free herbal tea that can be served hot or cold. The box contains 20 individually packaged bags. I was most excited about getting this because I love the name-brand Celestial Seasonings Candy Cane Lane tea.

The Celestial Seasonings tea has a dominant peppermint flavor, but I can also readily taste the vanilla and other ingredients; it has a more nuanced flavor. In contrast, Aldi’s Benner Tea Co. Candy Cane tea tastes good, but if you want the classic Candy Cane Lane flavor, you’ll want to go with name-brand Celestial Seasonings. I also think Trader Joe’s Candy Cane tea has a more complex flavor, with peppermint and hints of vanilla. 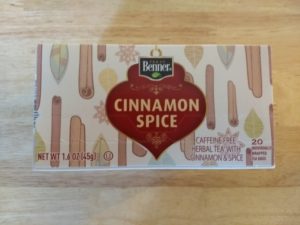 This is a solid caffeine-free herbal tea with good cinnamon flavor. It also comes with 20 individually packaged bags and can be served hot or cold.

Overall, this makes a good, flavorful brew that can be enjoyed during the holidays and year round. 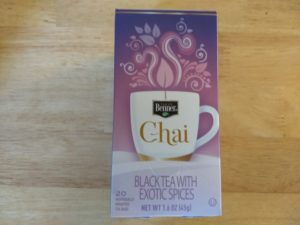 This caffeinated tea comes with 20 individually packaged bags and, again, can be served hot or cold. It’s advertised as “black tea with exotic spices.”

I’ve sampled several other name brands of chai from other grocery stores over the years, and this one from Aldi was decent, but the flavor seemed a bit weak compared to other chai. It’s still good considering the low price. This is another brew that can be enjoyed year round and not only during the holidays.

Aldi’s selection of Special Buy Benner Tea Co. holiday teas is solid. The candy cane variety has a nice mint flavor, and the cinnamon spice variety has plenty of cinnamon and good flavor. The chai tea seemed a little weak on flavor but was still decent. They are all good ways to get your daily brew without spending a lot of money, and it’s nice to see Aldi offering some new flavors.

Rachael is the Senior Editor for Aldi Reviewer. She enjoys reading, cooking, gardening, and collecting house plants when she isn't busy shopping at Aldi.
View all posts by Rachael →