EDITOR’S NOTE (11/21/17): This review is for the 2016 version of the Crane Wireless Tracker. The 2017 Tracker (manual) appears to be different in a couple of ways, including a heart rate measurement, a somewhat restyled display and wristband, and a slightly higher ($39.99) price tag. What hasn’t changed are the reviews of the Tracker’s iPhone and Android apps, which continue to be terrible. Keep that in mind, since the Tracker’s functionality is a lot more limited without a properly working app.

There are two certainties about the New Year: 1) that people will make resolutions to improve their health, and 2) that said people will spend money on products and services to do so, whether it be gym memberships or fitness gadgets.

Activity trackers, like the ones made by Fitbit, are a popular way to get on track with regard to fitness. They connect with your phone, tracking a variety of different metrics and giving you all kinds of data to look at. The best apps are both a statistician and a coach, showing you numbers while also creating achievements for users to reach for. That’s a lot of moving parts that go into a successful activity tracker … and a reason why a cheap, generic one is a risky proposition.

Naturally, Aldi has decided to try, with an absurdly cheap (relatively speaking) fitness tracker from Crane: 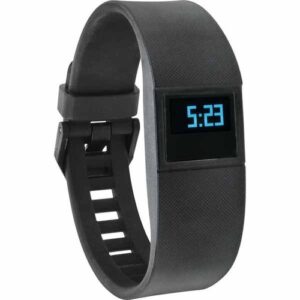 The Crane Wireless Activity Tracker, which retails for $35, comes with two wristbands, a USB charger, and a clip. Like many activity trackers, the main display module can be removed from the band or clip and put into the USB charger for recharging. The Tracker comes with a three-year warranty. (You can find the Crane support site here and the manual here.)

On paper, this activity tracker should do plenty, especially for the price. It displays the time and has an alarm. It collects data on steps, distance, and calories. It lets users catalog activity time, mark whether they have achieved daily goals, and even claims to record sleep cycles, including waking up, light sleep, and deep sleep. It also claims to be waterproof up to 95 ft., so it can be used in the shower or while swimming in the pool. (The manual discourages using it for water sports like diving.).

According to the manual, data on distance, steps, and calories can be accessed without a smartphone through the phone … for the current day. For any data beyond that, you need to connect the Tracker using Bluetooth to the Crane Connect App, either for iPhone or Android.

And that’s where things start to get tricky.

According to the documentation, connecting requires Bluetooth using either an iPhone 4s or newer or an Android 4.3 or newer. The Crane support website maintains a compatibility list, but even then things seem to be a little uncertain. The reviews of both the Android and iOS (iPhone) apps are not pretty: 2.6 out of 5 stars across 1600+ reviews on the Google Play Store, and 2 out of 5 stars across 80+ reviews on the iTunes store. In both cases, the feedback is unsettling: problems connecting to devices, problems logging into the app, and updates actually breaking previously working connections are among the complaints, and from multiple users. The device itself, as far as we can tell, appears to be sound, but the app itself appears to have plenty of problems, and that is, in our view, a deal-breaker for a device as reliant on an app as an activity tracker is.

By all accounts, the Crane Wireless Activity Tracker is a competent device with a nice amount of data collection for the price, and it’s even waterproof to boot. Unfortunately, the poor feedback from both the Android and iPhone versions of the app are too many to ignore. Since most of the functionality of the Tracker — beyond just getting your data for a given day — revolves around the app, we can’t in good conscience recommend this device at this point. Shell out the $35 at your own risk.