You’ve seen them before. I know you have. You’re paying your bill at a sit-down restaurant — maybe when the waiter brings your bill, or maybe when you go up to the counter to settle up. Perhaps you spot them by the hostess or cashier’s counter, or possibly the waiter even puts a couple of them on a little tray with your receipt.

They’re round, shaped roughly like a tire or cheese wheel. Red strips cut along the outer edges, set within a core of white. Peppermint in flavor, these mints are seemingly made for one purpose: that is, as a breath freshener after a meal.

Some people call these peppermint candies. Others call them starlight candies. Similar in taste and color to a candy cane — which itself dates back at least to the 19th century — no one seems to quite know when these particular candies became a thing, but it’s enough to say that, by the 20th century, you could find them in many places, especially where food was served.

They’re common enough at grocery stores, pharmacies, gas stations, and other places where candies are sold. Aldi, which frequently sells candies under its own private labels, sells its own version of the familiar mint. 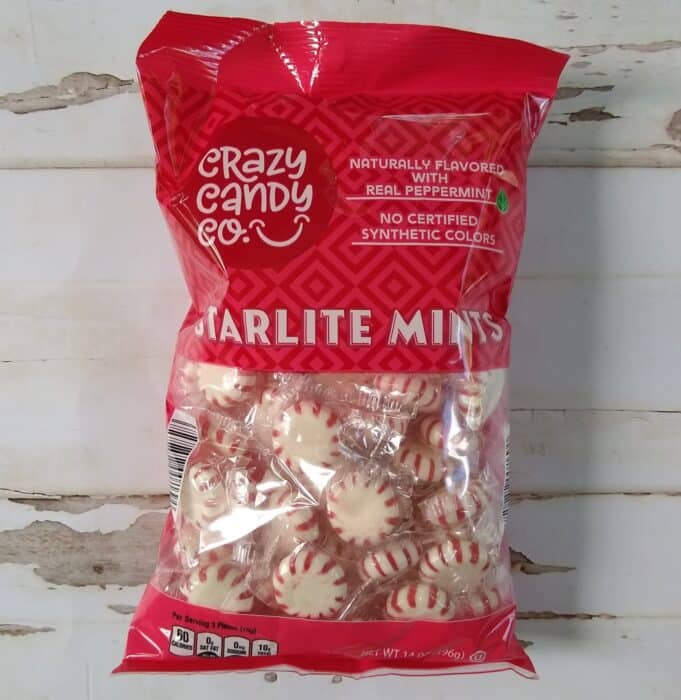 Crazy Candy Co. Starlite Mints are an Aldi Regular Buy. That means you can find them in stores all the time. In my store, I located them on an endcap with other types of candy in the middle of the store, but your location may vary. Crazy Candy Co. technically isn’t a company at all — it’s an Aldi house brand, exclusive to the store.

At the time of this post, the mints came in a 14-ounce bag and cost $1.35. That comes to about 9.6 cents per ounce. That’s less than most name brand versions and is around the same price as Walmart’s Great Value Peppermint Starlight Mints.

These are primarily a sugar candy with peppermint and a few ingredients added for color. You don’t readily associate these with calories, but they do have a few: a single candy, for example, has 20 calories, in addition to about 3 grams of sugar. All in all, they’re probably not going to break your diet unless you eat a bunch of them (I don’t personally know anyone who does that), but they’re not calorie-free, either. 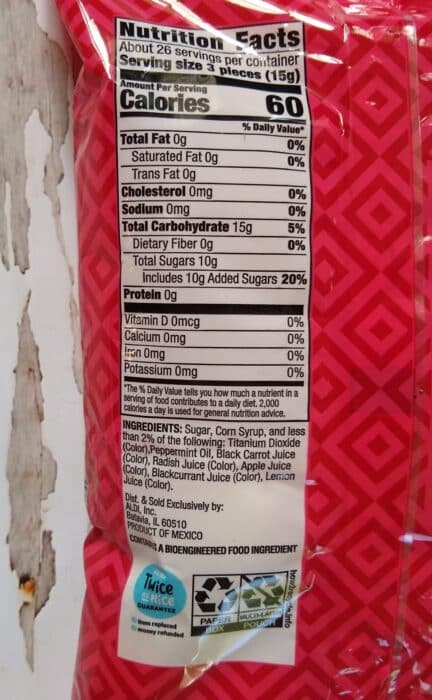 Each mint comes individually wrapped in a little sealed plastic pouch. Most of mine were intact, with a few chipped or with a loose piece. The texture and taste is, to me, like your standard peppermint: hard candy, sweet, with a little bit of that peppermint kick. I don’t know if it’s the strongest peppermint flavor I’ve had, but it’s pretty consistent with most other mint candies I’ve had like these. They last a while, too. 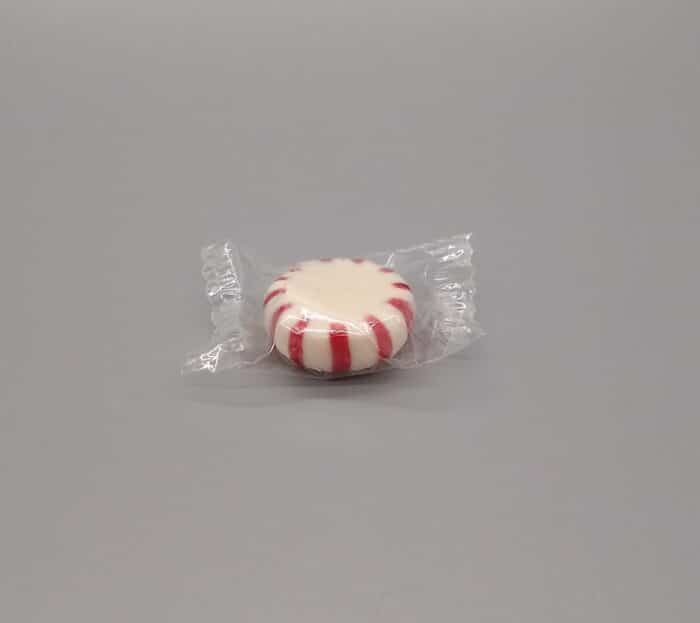 Crazy Candy Co. Starlite Mints are a decent peppermint candy. They’re fairly mild, with maybe a little less peppermint kick than some other mints I’ve had like these, but the taste and texture are otherwise good. The price is good, especially compared to name brands, and these are worth looking at if you like to keep these kinds of candies on hand.