Skip to content
Home Features How Did Aldi Get its Name?

How Did Aldi Get its Name? 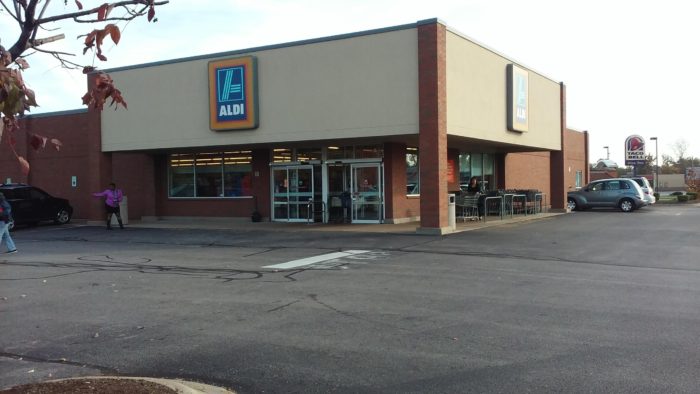 The naming of businesses or stores is a curious thing. There are generally three potential options when choosing a name. First, some stores are named after their founders. There’s Walmart (and Sam’s Club), founded by Sam Walton, or Macy’s, founded by Rowland Hussy Macy. Second, some stores have names that communicate what they sell: Petco, Five Below, Shoe Carnival, or Dollar General, for example. Third, some businesses have names that aren’t obviously related to what they sell and seem to defy explanation: Amazon, Target, and Apple, to name a few.

So where does the German grocery store Aldi fit in? What is behind Aldi’s name? Is it someone’s name? Is is a made-up word? Is it a German word?

How did Aldi get its name?

To answer that question, we look back to 1913, when a woman named Anna Albrecht opened a small grocery store in the suburbs of Essen, Germany. It was called Karl Albrecht Spiritousen and Lebensmittel (translated Karl Albrecht Spirits and Food). Anna’s sons, Karl and Theo, were conscripted to fight during World War II, and when they returned home after the war, they took over store operations.

Their business model was built on thrift. The shop was small and plain, and they only sold nonperishable goods. They didn’t spend money on advertising, and they culled products from their inventory that didn’t sell well. They also kept prices low, which gave them an edge in post-war Germany’s economy.

Gradually, they expanded from one store to more than 100 stores in Germany by 1955.

In 1961, they changed the name to Aldi, which is short for Albrecht-Diskont, or, in English, Albrecht Discount. In the U.S., where stores were eventually established, Aldi is pronounced All-Dee.

There is more to the Aldi story and the family behind the business, including the fact that the brothers amicably parted ways in the 1960s over a disagreement about whether to sell cigarettes. That led to Karl founding Aldi Sud, which operates in the southern part of Germany, while Theo founded Aldi Nord, which operates in northern Germany. Aldi Sud expanded to the United States in 1976 and operates Aldi stores, while Aldi Nord purchased the Trader Joe’s grocery store chain in 1979.

But all of that is a story for another time.

In the meantime, if you simply want to know how Aldi got its name, the answer is that it is a blending of the founding Albrecht family name and the word “discount.” It’s short and sweet, and it works.