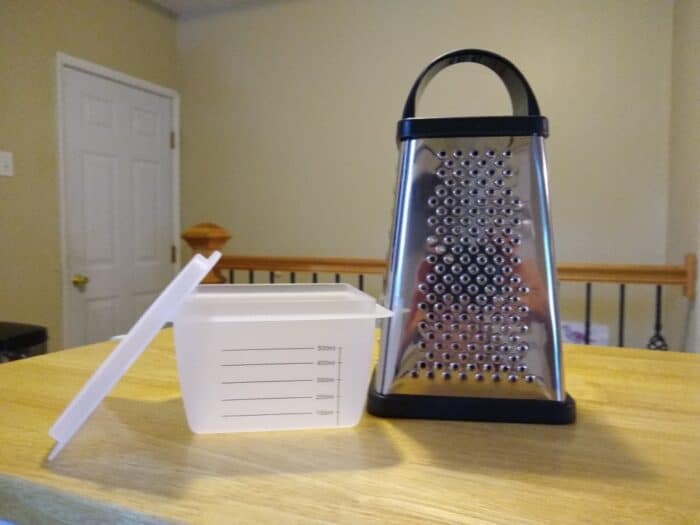 Either way, most people who shred their own cheese do so because pre-shredded cheese sold in grocery stores contains extra ingredients that keep the cheese from clumping together (cellulose, potato starch, corn starch, or calcium sulfate) or molding (natamycin).

I currently have several bags of shredded Happy Farms cheese from Aldi in my refrigerator, and they all contain potato starch, corn starch, calcium sulfate, and natamycin.

While these ingredients may not be terribly bad for you to eat, they may affect the texture in recipes, and it can be difficult to know just how much of these things you’re eating via your cheese shreds.

On the other hand, cheese purchased in blocks doesn’t usually have anti-caking ingredients or mold inhibitors. (But be aware that your cheese blocks probably won’t last for months in your refrigerator like the shredded varieties do.)

A glance at the ingredients list for a block of mild cheddar I recently purchased from Aldi shows only pasteurized milk, cheese culture, salt, microbial enzymes, and annatto (vegetable color.) 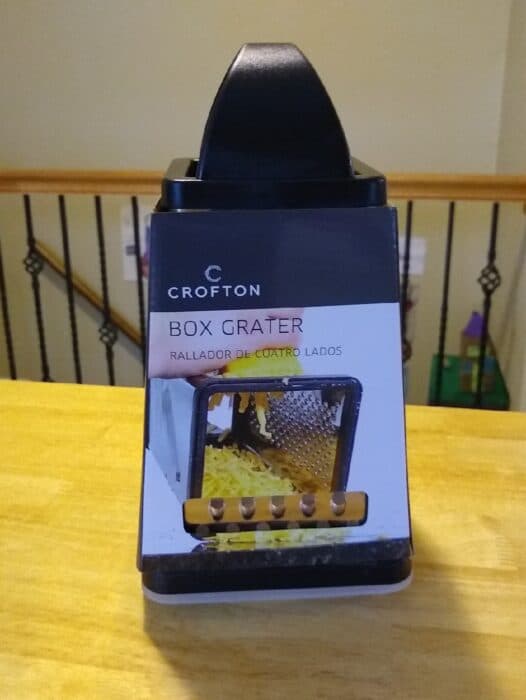 With that in mind, Aldi sometimes sells graters if you want to grate your own cheese.

The Crofton Box Grater cost $6.99 at the time of publication. That’s less than what similar box graters with containers cost at retailers such as Walmart, Target, and Amazon.

The Crofton Box Grater is an Aldi Find (Special Buy), which means it’s only in stores for a short time. If you miss it this time around, wait a year or so and it will probably come back. 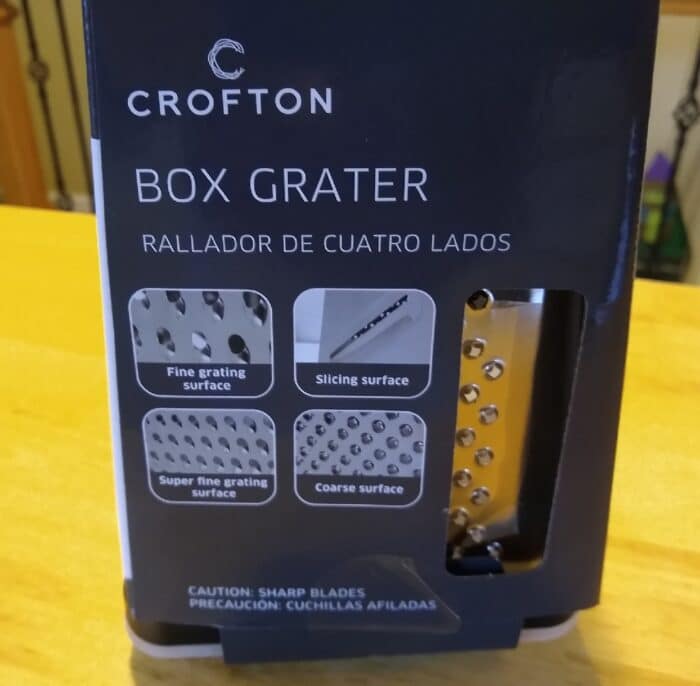 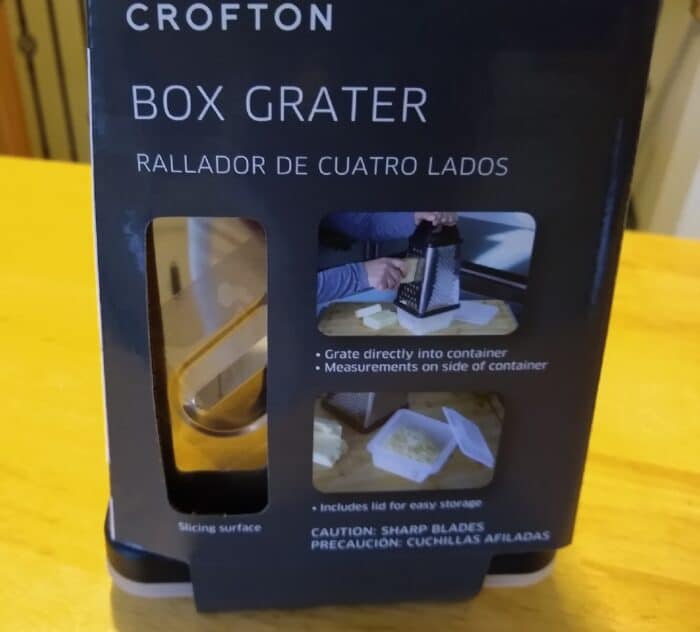 The box grater was sold alongside a rotary grater and a microplane grater, and they each cost $6.99.

Features for the box grater include: 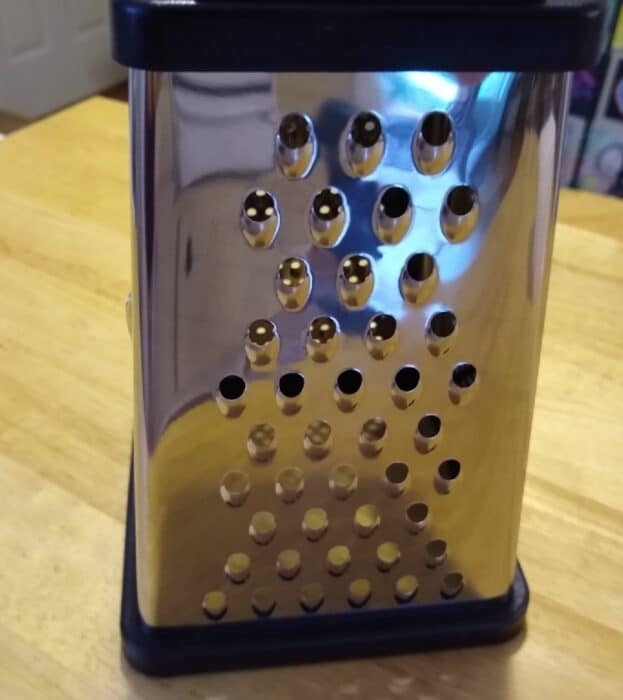 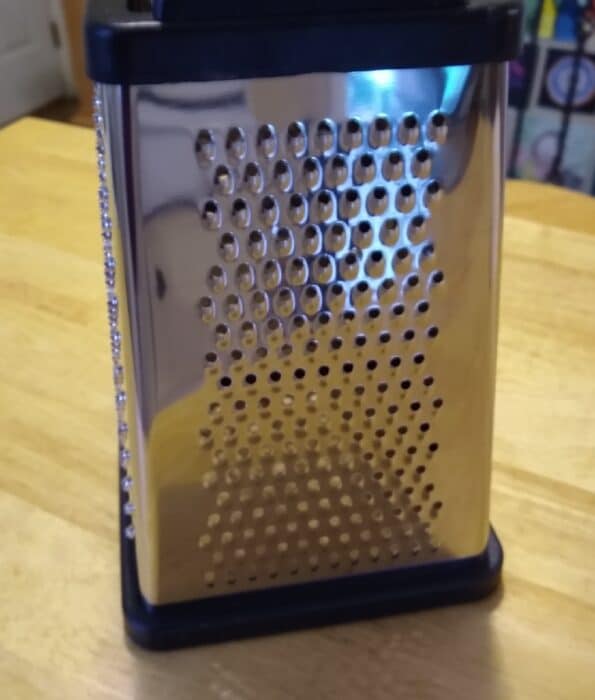 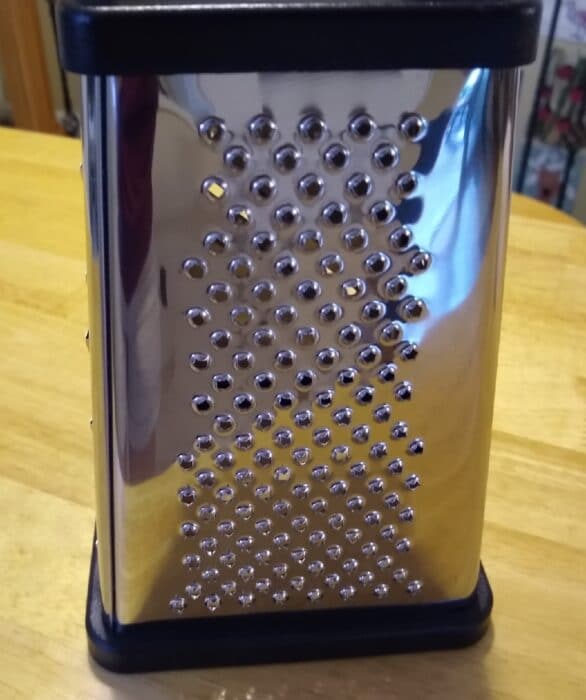 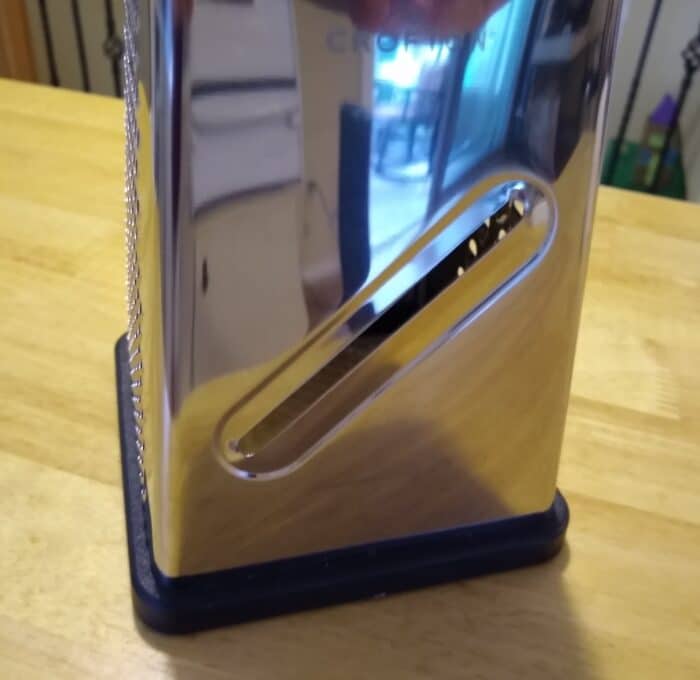 The grater was made in China. Not surprisingly, the box advises caution because this product has sharp blades. 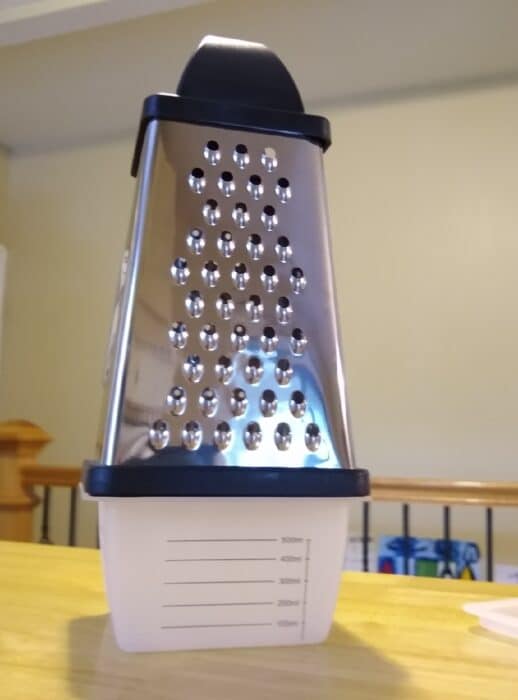 The grater atop the included storage container. When you use the grater, the cheese goes directly into the container.

I initially put the box grater to use shredding mild cheddar to sprinkle on top of some chili cheese dogs, and I used it to grate cheddar to put in soup. It’s easy to use, and most of the cheese collects in the plastic box positioned below the grater, although you’ll still have to pick up a few cheese shreds that fall on the counter. 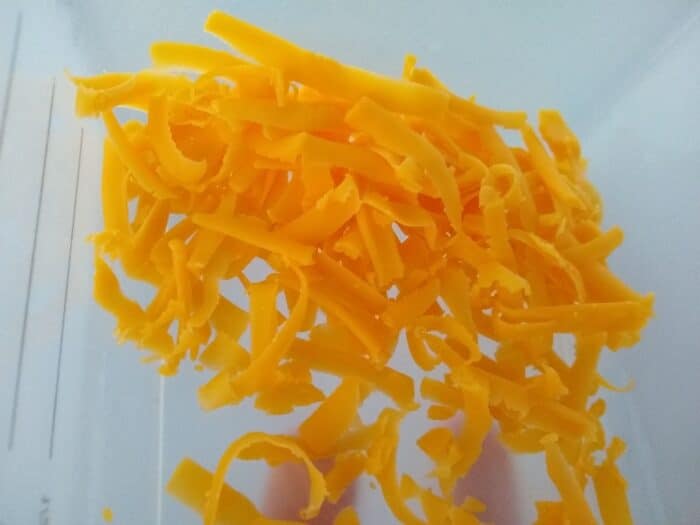 Cheese that was shredded using the fine shredding side of the box. 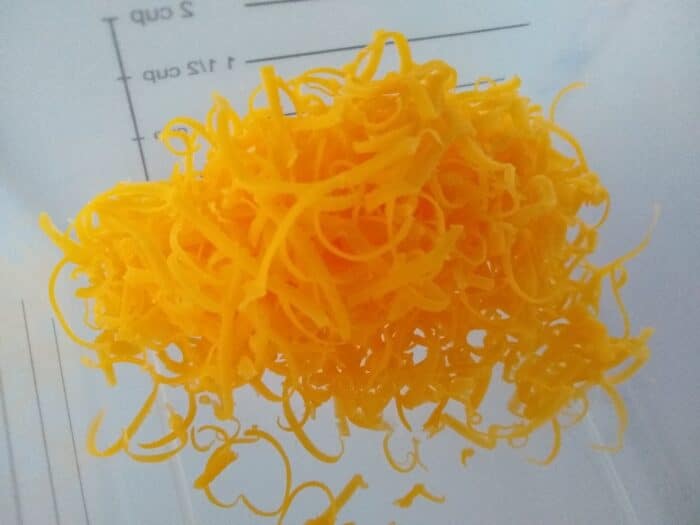 Cheese that was shredded using the super fine shredding side of the box.

I particularly like the fine and super fine shredding sides of this box, and those are probably the sides that get the most use in a typical home kitchen.

Just to put the box through the paces, I also grated some mild cheddar using the coarse grating surface, but this side is really best for harder cheeses such as Parmesan. 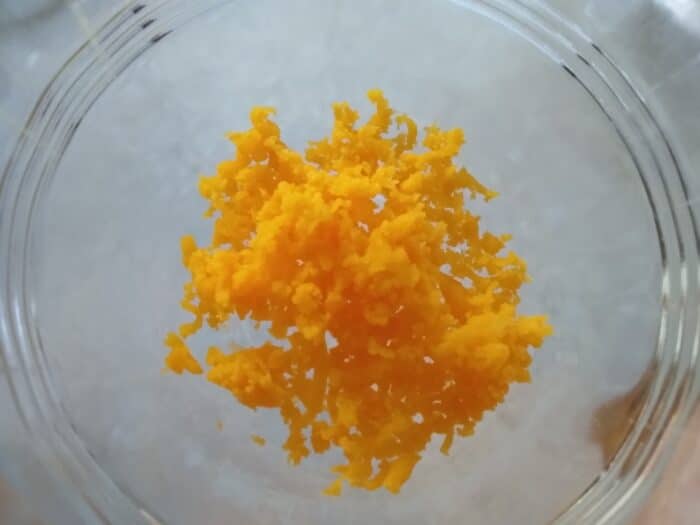 Cheese that was grated using the coarse grating surface.

I also tried the slicing side to slice my cheddar block, but my slices didn’t turn out to be very neat. I either need more practice slicing cheese with a box grater, or this side is better for slicing things such as potatoes. 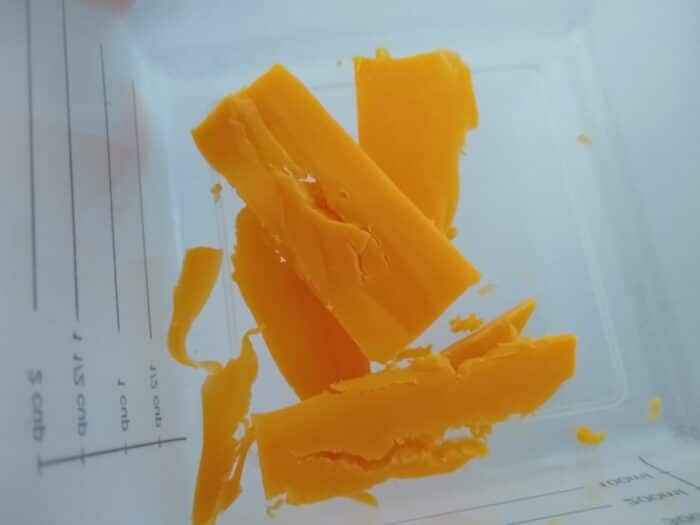 Cheese cut using the slicing side.

I like how this grater comes with a container (and a lid) that collects the cheese as I grate it. The container has measurement markings for 1/2 cup, 1 cup, 1 1/2 cups, and 2 cups. It also has millileter markings from 100ml to 500ml.

While the box grater is dishwasher safe, I opted to carefully hand wash it because I didn’t want the sharp surfaces to nick my dishwasher rack.

I’m looking forward to trying this grater when I prepare other meals such as nachos, cheesy soups and chowders, casseroles, quesadillas, and egg dishes. This grater can be useful for things beyond cheese, too, including for grating zucchini to make zucchini bread or for grating carrots to make carrot cake, or for making hash browns.

Whether you’re shredding your own cheese for dietary reasons or because you’re a foodie, this box grater will help you do it.

The Crofton Box Grater does all the things a box grater typically does — fine shredding, super fine shredding, coarse grating, and slicing. It comes with a box that collects most of the cheese as you shred it, and the box includes measurement markings and a lid.