There are many styles of meat thermometers out there, from the old-school dial thermometers to the modern instant-read digital thermometers. Aldi has introduced a number that falls somewhere in between. 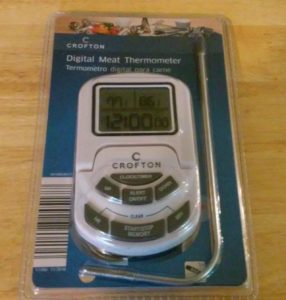 The Crofton Digital Meat Thermometer comes with the main device, an included AAA battery, a stainless steel probe attached to a 38 inch cord, and a small silicon cap to fit over the pointed end of the probe. The main device has several buttons on the front, as well as a few recessed buttons on the back.

Right away, it’s clear that this is more than just a thermometer. It is also a clock, a timer, and an alarm. (More on this last part in a second.) It can be folded to stand on a table, or can be hung on a refrigerator or metal surface using the back-mounted magnets. The probe, which plugs into a headphone-style jack on the side, can be detached and stored separately from the thermometer. 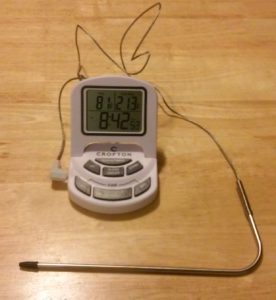 Setting up the thermometer is pretty simple. The buttons are intuitive enough that I didn’t need to consult the manual, although it’s there if you need it. Taking a meat measurement is as straightforward as plugging in the probe, making sure the probe button on the back is on, and sticking the probe into the desired meat or poultry. The back helpfully lists desired temperatures for a few products.

The thermometer includes a couple of features to assist with cooking. It has a temperature alarm you can set to go off when your food reaches the target temperature. The packaging boasts that the cord can be used to run the sensor inside the oven while the device is outside. The cord is both slim and, I think, plenty long for the task.

The display also has a timer you can set if you need it. We wish it also included a stopwatch feature, but the timer does the job.

As for drawbacks? Well, there are a few.

One, this is not an instant read thermometer. I’ve worked in the past with thermometers that give a temperature within a second or two. This one does not. On the low end, it took me a good 15-20 seconds of watching the temperature display slowly climb from air temperature to the temperature of the pork I was cooking. When I tested it on beef, it was more like 30-60 seconds.  That’s a long time, and while that isn’t much of an issue if you’re using this in an oven, it’s not at all ideal for someone on a grill trying to make a snap judgement about a meat’s current state. The packaging doesn’t say instant read and you probably wouldn’t expect it for this price, but know that this is not a speedy device, digital or not.

Two, the display stays on all the time. There is a button to turn off the temperature sensor, but the clock is always on and always showing. Some may not consider this a drawback, but I do wonder what this means for battery life.

Finally, I did not see any mention of a warranty on the packaging. This might be the first Aldi electronic device I’ve ever purchased that didn’t have some sort of warranty. Not even 30 or 60 days. There is an after-sales support number, but that seems of small comfort when they can’t do much other than tell you what the manual already said. Granted, the price is cheap and a warranty might not matter, but it’s a consideration … especially that past versions of the Crofton meat thermometer has had either a one or two-year warranty.

The Crofton Digital Read Thermometer has several cool features, including a clock and a thermometer alarm. If you need something for oven cooking, like keeping the temperature on a Thanksgiving turkey, this is your product. The long read time probably makes it less than ideal as a grilling tool, though. Also be aware that it doesn’t appear to come with a warranty.