There are hot dogs, and there are beef franks.

Both are fine, but there are differences. Hot dogs are made of a wild assortment of … stuff, from pork and chicken, to salt, preservatives, and other things. Beef franks also contain an assortment of ingredients, but they are fewer in number, and beef — rather than pork and chicken — is the base ingredient. The net effect of this is that hot dogs and and beef franks have subtle but significant differences in taste.

In general (but not absolutely), beef franks are considered the slightly superior food, and many ballparks will carry beef franks. It is not uncommon for people, in fact, to call them “ballpark franks.”

Now, Aldi carries all kinds of things, so you can certainly get your hot dog fix if you want to (and sometimes we do). For today, though, we decided to look into one of the Aldi beef frank options, the Parkview Beef Frank: 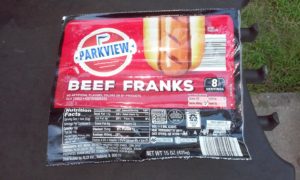 Parkviews — that has a nice ring to it — come in packs of eight and are in the refrigerated section, near their hot dog cousins. Like other beef franks, Parkview Beef Franks can be frozen or thawed, and in our experience the taste tends to be about the same, although cooking from frozen naturally takes a little bit longer.

The franks don’t contain any cooking instructions, which is not surprising since beef franks are generally pre-cooked. I don’t think anyone would argue against the idea that the very best way to cook a beef frank is over a grill, although those without grills can also boil them in hot water or microwave them if necessity dictates. Regardless of the method, the franks cook up in minutes.

And the Parkview Beef Franks are good. They are every bit the equal of their ballpark counterparts, with a great taste and texture. Pair these with nachos and cheese or Aldi steak fries and you’ve got a tremendously tasty — if not entirely healthy — meal.

Any drawbacks? Just one. The Parkviews run about $2.30 a pack at our local store. That’s a lot more than Aldi hot dogs, which can be had for $0.99 or less. Of course, the tradeoff is a superior taste (and for a lot less than a single actual frank at the ballpark), but if you’re cooking for a huge crowd you might think twice about buying a ton of these. On the other hand, if you’re trying to impress said crowd: go for it. They won’t know what hit them.

Aldi has delivered the goods on a true ballpark frank here. They cook easily, taste awesome, and cost a lot less than what you’d pay at a real baseball game. If you don’t mind spending more than you would on an Aldi hot dog, this one is a winner. Highly recommended.