EDITOR’S NOTE: If you’re looking for information about Caraway dupe pans at Aldi, view our posts here and here.

One notable exception to that trend is skillets. Aldi seems to rotate skillets in and out of the Special Buy lineup more than just about any other product. That’s not to say that those skillets are identical. Far from it; the skillets tend to vary in style and design, with different interior coatings, different dimensions, and sometimes other key features. That’s to say that what’s true of one Aldi skillet set may not be true of others.

I was especially conscious of this. When I set out to review these, I was looking to replace an Aldi skillet I bought in 2013, under the now-gone Kitchen Living brand, that was one of the best skillets I’ve ever had this side of Calphalon. Because of how different the Aldi skillets can be from one another, I knew what I experienced in the past wouldn’t be able to tell me what worked in the future.

Nevertheless, I was overdue to replace a few of my aging skillets, which is what sent me to Aldi. This post deals with two sets, both of them with pretty plain names: the Crofton Fry Pan and the Crofton Fry Pan Set. Both products retailed for $10.99 each, which prices them on par with big box budget brands. They also each come with a 2-year warranty. 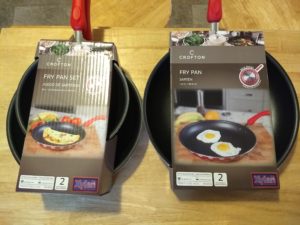 The Fry Pan Set consists of an 8″ and 10″ skillet, while the Fry Pan is a 12″ skillet, so between the two products you can get a trio of skillets good enough for most small-to-medium-sized kitchen work. While there are a couple of flourishes, these skillets are about as straightforward as they get. The bodies of the skillets are all aluminum, which are designed to evenly distribute heat. The bottom of each skillet features the textured radial design common to skillets, with a little visual flourish in the form of a decal design along the sides. (In the year we bought them, the skillets came in red and black; thinking of my wife, I bought the red.) The handle has a comfort grip. 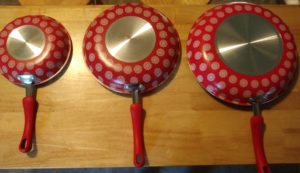 The most important part of the skillet, of course, is the cooking surface, and the Crofton offers no surprises here. The packaging boasts that it’s made of “Xylan Plus,” which is the brand name used by the Whitford Company for polytetrafluoroethylene (PTFE). A more familiar name associated with PTFE is Teflon, originally developed by DuPont (and now managed by spinoff company Chemours). There are a lot of conflicting opinions online as to which formulation of PTFE is best, but suffice to say that, in the short term at least, Xylan Plus should do what Teflon does. We have no idea how it will hold up long-term. 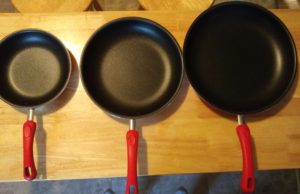 Our first use of the skillets had zero problems, which is what we would expect. The 8″, 10″, and 12″ all heated up quickly, cooked evenly, and slipped food off easily. Cleanup was simple, and the handle stayed cool and was comfortable. It’s also worth noting that all three of the skillets were balanced, staying upright on the stove even when empty, something not always true of other budget skillets I’ve used. Time will tell on durability, but as budget models these seem to work fine.

While there’s nothing particularly special about these skillets, if you’re looking for a set of inexpensive, functional skillets, this Crofton set fits the bill. The 2-year warranty is a nice perk, too. Be aware, though, that because Crofton offers a variety of different skillets, performance among different Crofton models may vary.