Glance over the dessert menu at certain popular restaurants and you’ll notice one common treat is a skillet chocolate chip cookie. It’s often brought to your restaurant table in the same skillet it was baked in back in the restaurant kitchen. It’s usually topped with a scoop of vanilla ice cream, and maybe it’s drizzled with some chocolate syrup.

Skillet cookies aren’t necessarily difficult to make at home, but they do require some special equipment: namely a cast iron skillet. Cast iron cookware is old, having been used to cook over open fire before modern kitchens were a thing. They’re still popular today in part because home cooks don’t worry about potential chemicals with cast iron cookware compared to modern nonstick cookware such as Teflon. Cast iron pots and pans generally require some work before using them (they have to be seasoned), and there are some rules to using them them so they will last for years (don’t use metal utensils on them, and make sure they’re completely clean, seasoned, and dry before storing them), but most people who use cast iron cookware love it.

Aldi sells cast iron cookware from time to time under its Crofton private label, which focuses on kitchen products and cookware. Most recently, Aldi is selling a set of smaller cast iron skillets that come with wooden trivets for a complete oven-to-table experience. 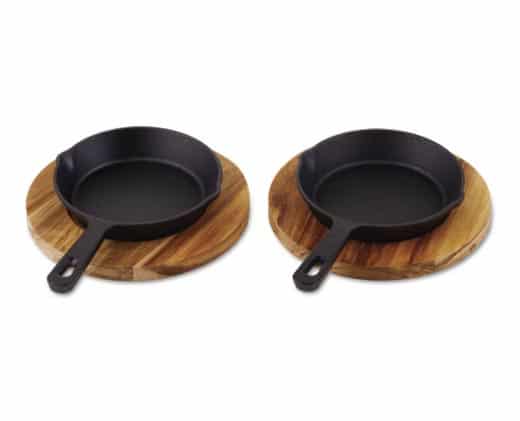 The Crofton Cast Iron Dessert for Two set (Product Code: 705536) cost $14.99 at the time of publication. That price is competitive compared to other cast iron dessert skillets or cast iron mini skillets on Amazon, where some single skillets cost as much as this set of two from Aldi.

This is an Aldi Find, so it’s only in stores for a short time. Aldi does not offer online ordering for its specials if they aren’t in stock at your local store.

To the best of our knowledge, Aldi has not sold a set of smaller dessert skillets like these before, although Aldi has sold other types of cast iron cookware in the past, including a larger skillet and Dutch oven and a lightweight fry pan and Dutch oven.

Here’s more information on the set, according to Aldi: 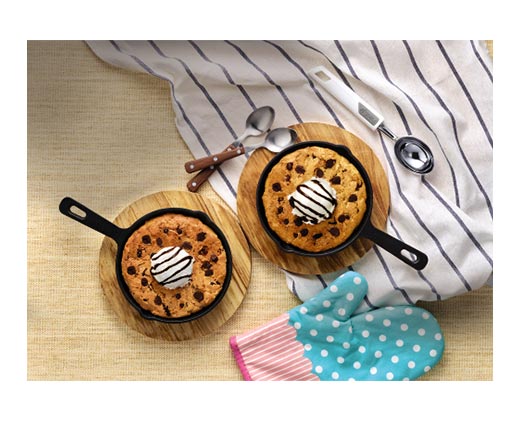 The Aldi ad suggests you can bake chocolate chip skillet cookies in these cast iron pieces.

We haven’t yet tried this set, so we don’t know how well it works and we don’t know who makes it. Aldi also has not shared the dimensions for these cast iron pieces. Until these show up on store shelves, we don’t know how many inches in diameter the skillets measure or how much food they can hold. We also don’t see any warranty information on the Aldi website for this product, so we don’t know if this comes with any kind of after-sales service. We write open threads so readers can share about their experiences with a product.

Did you purchase the Crofton Cast Iron Dessert for Two? Tell us what you think in the comments.