Back in the day, my dad would make popcorn using this stovetop popcorn contraption. He’d pour the popcorn in, heat it up, and watch as the popcorn and oil produced an explosion of popping. It was a bit of a mess, but it was also a much-anticipated movie snack.

At some indeterminate point, dad retired that oil-stained device, replaced by the ease and efficiency of microwave popcorn. I never lost my intrigue for cooking the kernels myself, and during the last year I even tried my hand at cooking Trader Joe’s kernels in a saucepan. Popcorn in a saucepan isn’t too hard; it just requires some kernels, oil, salt, and butter if you want them, and 10-15 minutes or so of time. Still, the speed of the microwave is pretty nice.

And then I discovered that there is a way to cook popcorn in the microwave that doesn’t involve those weird packets. 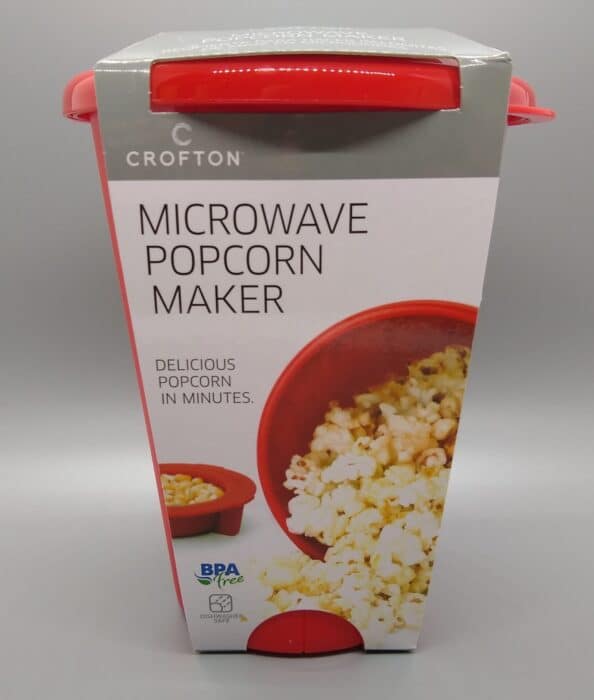 The Crofton Microwave Popcorn Maker is an Aldi Find, which means it’s only in stores for a short time. Once it’s gone, it’s gone, and you won’t be able to find it in stock until it comes back, whenever that might be. In 2022, Aldi sold it as part of a collection of various microwave accessories that included an omelet maker and an egg poacher.

A the time of this post, the popcorn maker retailed for $4.99. Most similar popcorn makers I found online range from $10-$20, with a few dipping under $8 if they’re on sale. If you want to try your hand at this kind of popcorn maker, you won’t do much better in terms of price than this Adi model.

There’s not much to it. The package contains just four things: 1) the plastic container, 2) a silicone liner, 3) a plastic lid, and 4) the paper product label, which also has the instructions. The container claims the popcorn maker is BPA-free and dishwasher-safe. 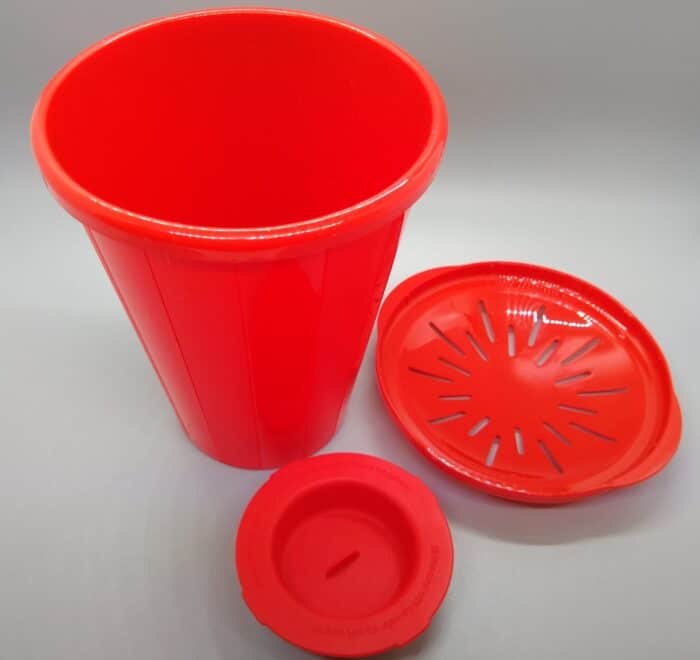 The container, lid, and silicone liner.

The instructions are simple. You fill the whole silicone liner with kernels and place at the bottom of the popping bowl, being careful not to overfill or to let any kernels get under the silicone liner before microwaving. Then put the lid on the bowl, place the liner in the center of the bowl, and microwave on full power in a 1000W oven or the 1000W equivalent if your microwave is higher than 1000W. (The instructions state not to use the Popcorn setting on your microwave if it has one.)

The instructions note that it will take about 2 minutes to cook the popcorn, but the cooking time might vary depending on the microwave. If needed, adjust the time for future batches, but be careful not to overcook, since the popcorn can get scorched. The instructions warn not to leave the popcorn unattended while popping. Be careful when removing the cover as some steam can get released.

You can then add butter and salt to taste, and the instructions add that you can then put it back in the microwave for about 20 seconds. Then you give the popper a light shake to let the unpopped kernels settle the bottom of the cup.

One last warning: wait at least 3 minutes for the container to cool down between uses. 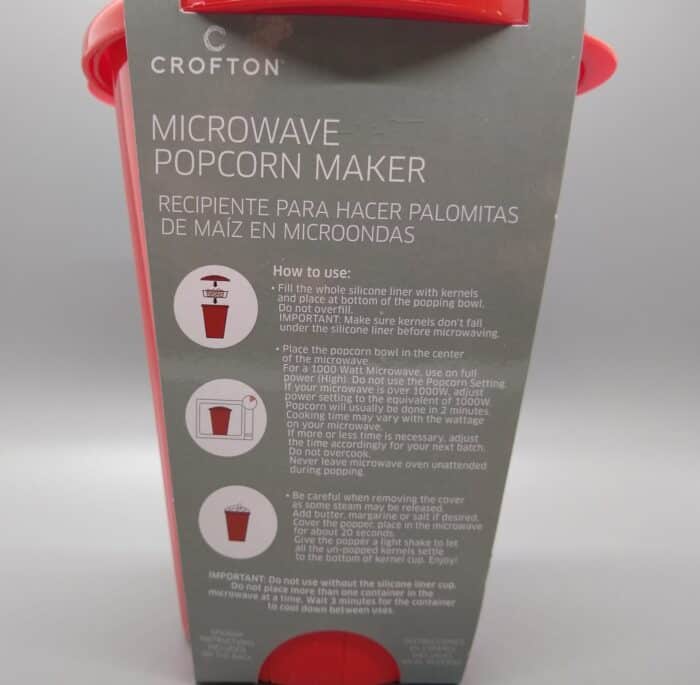 For my test, I used Trader Joe’s Organic Popping Corn, which I’d cooked in a saucepan before. I found the silicone liner held about 2 tablespoons of popcorn, about the same amount as a single serving of the TJ’s popcorn. 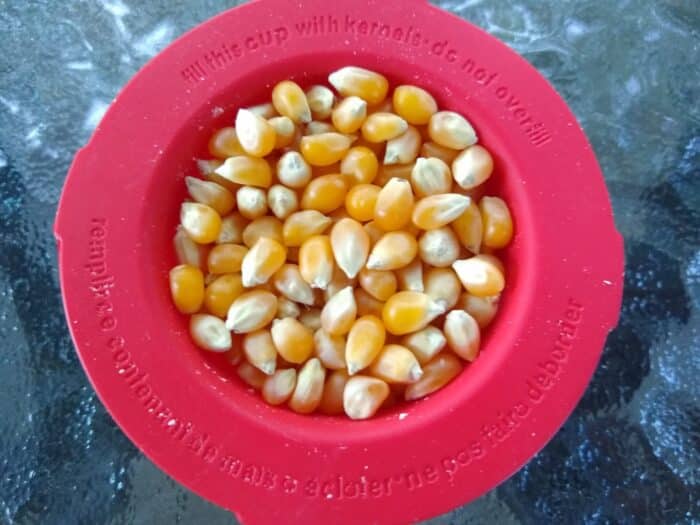 I cooked the popcorn for two minutes, but in my 1000W microwave the popcorn had more or less stopped popping not long after the 1:30 mark. For testing purposes, I let it go the full time … and, sure enough, the popcorn was fully popped but also scorched. 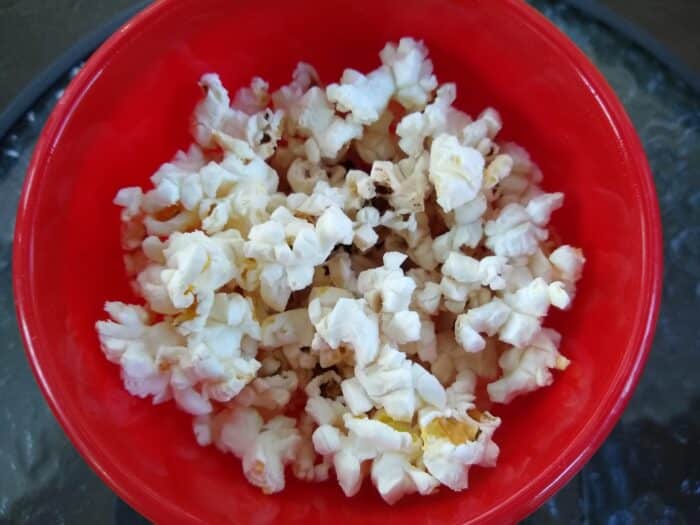 Two minutes. It was burnt.

For my later attempts, I cooked it less than two minutes. Depending on the time, sometimes I had a lot of kernels left and other times not as many. There’s definitely an art to cooking with this device, but the best bet for my microwave seemed to be somewhere between 1:30 and 1:40. I felt I had to be pretty attentive, and even when I felt good about the time, sometimes there were a few pieces of popcorn that got scorched. 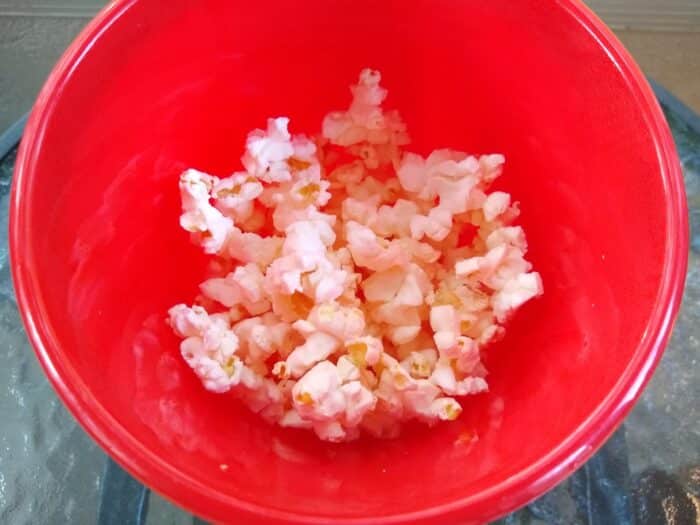 One minute thirty seconds. Less burnt, but less popcorn, too.

I also found I didn’t like the advice to add the butter and salt and cook longer. My popcorn came out chewy that way. Instead, I found that heating the butter separately in the microwave and then drizzling it on worked better.

One other unanticipated problem: my lid stopped staying on after a couple of uses. I’d waited more than the prescribed 3 minutes between uses, but apparently that wasn’t long enough because it seems something warped to the point where I couldn’t get the lid to stay on, at least not very securely. I mean, it’s only $5 but still a disappointment.

On paper, the Crofton Microwave Popcorn Maker is an intriguing budget-priced item. For only $5, you get something that can make a single serving of popcorn in less than 2 minutes. But it has its problems: it’s hard to cook most of the popcorn without scorching some of it or making it chewy. I also found my lid would no longer stay on securely after two uses about 7 minutes or so apart.

That’s more hassle than I want, $5 or not. If you have a saucepan and some oil, you’re better off cooking it that way, or maybe just spring for an air popper if it’s important to you. We feel a little more comfortable not cooking our popcorn in plastic anyway. This might be still worth a look for some people, but all in all, I felt like I got what I paid for.