As much as the food experience can be about taste and smell, it can also be about sound. The sizzling of bacon on a skillet, or a fajita plate as it’s being brought to the table. The sound of boiling water in a tea kettle, a crab pot, or a saucepan of noodles. The hiss of a burger or steak on the grill as it’s being seared. Those sounds don’t necessarily promise the food will be great, but when you hear them, you certainly want to believe so.

The sound of popcorn popping is arguably one of the most distinctive sounds in all of food preparation. There’s just nothing like it. Whether you’re popping it in a microwave bag, or standing in line to get food before going into the movie theater, you’ll know that sound when you hear it. If you like popcorn — and I do — it’s frankly pretty awesome to hear, especially when accompanied by the smell of the popcorn itself and the butter that goes on it.

If you want popcorn at home, you can easily go the microwave bag route. Alternatively, you can try your hand at popping it yourself. Most grocery stores, especially the large ones, have popping corn. One such store is Aldi’s distant cousin, Trader Joe’s. 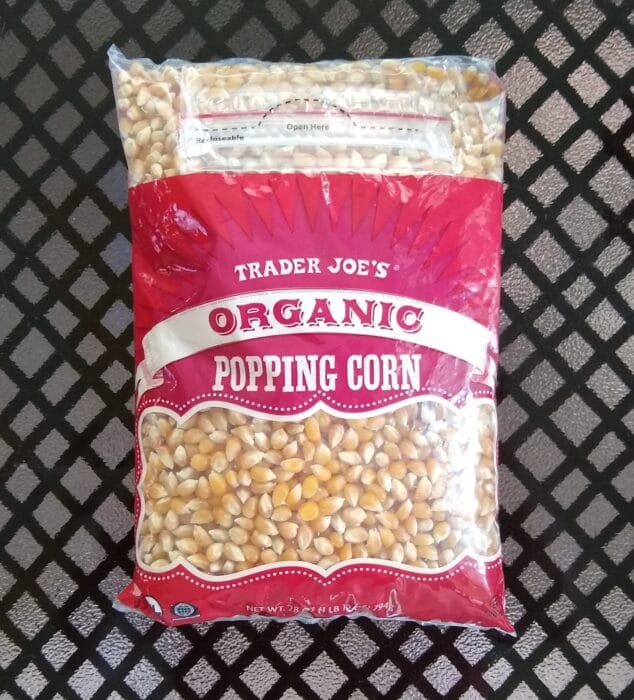 Trader Joe’s Organic Popping Corn can be found in the store’s dry foods section. It comes in a 28-ounce bag with a resealable top. At the time of purchase, we paid $2.49. That comes out to about 9 cents an ounce. For comparison, Walmart Great Value Yellow Popping Corn, which is not organic, is around 7 cents an ounce, while most popping corn on Amazon is 10 cents an ounce and up. Even compared to non-organic versions, the Trader Joe’s version is competitively priced.

Nutritionally, it has just one ingredient: organic popping corn. The bag says it is certified organic by Quality Assurance International (QAI). Popcorn — without butter and salt, at least — is a reasonably healthy snack food: 3 cups have 100 calories, almost no fat, no sodium, and 4 grams of dietary fiber. Of course, most people don’t eat popcorn without salt and butter. 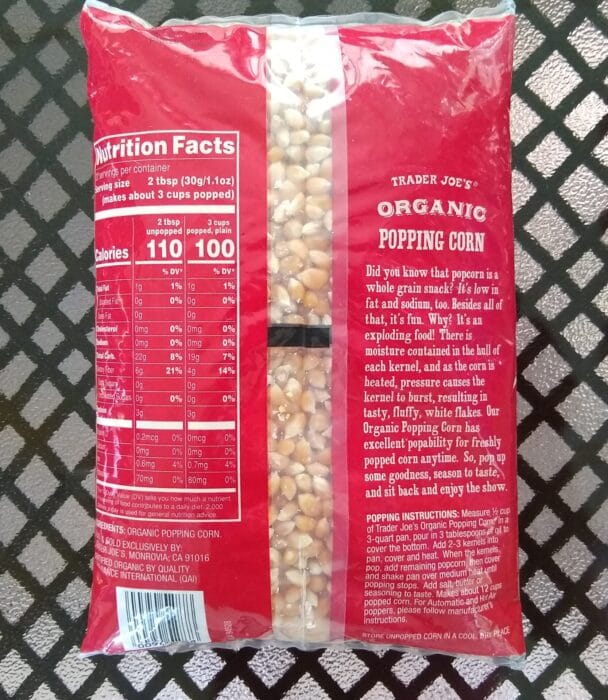 The bag gives instructions for how to cook the popcorn, noting that if you’re using an automatic or hot air popper, to follow the instructions on the machine. Otherwise, you can also pop the kernels in a 3-quart pan. To do so, first pour three tablespoons of oil to cover the bottom of the pan. Next, add 2-3 kernels into the pan, then cover and heat. When the kernels pop, the instructions say to “add remaining popcorn” (more on this in a moment), then cover and shake the pan over medium heat until popping stops. Then you add salt, butter, or seasoning to taste.

I don’t have a popcorn maker, so I made it in a saucepan over my stove.

If you’re a pro at making popcorn, you can probably skip this section (unless you’re looking for pure entertainment value). If you’re not a pro, read on.

When the instructions say “add remaining popcorn” don’t take it literally and add the entire bag. Because if you do, you’re going to have about 66 cups of prepared popcorn when it’s all over. As it was, I poured a portion of the popcorn from the bag — enough to cover the bottom of my 3 1/2 quart saucepan — and got enough popcorn for several people. You can see how things went down in this video. Of note: the video is condensed, but it took me a little more than 10 minutes to get from starting the saucepan with the kernels to finishing up the popcorn. Your mileage may vary.

As I said, when I was finished, I two large bowls of the stuff. 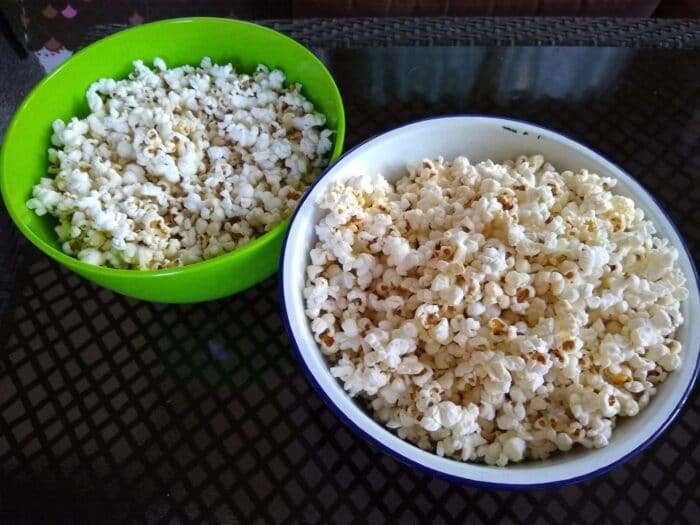 If you cook it up properly, including in a saucepan, this is good popcorn. It’s light and fluffy, just how you like it. Unless you like your popcorn plain, though, you’ll want to add seasoning. There are specialized products for just that purpose, but you can also make do with what you have around the house if needed. You can add some table salt, for instance. In addition, if you have sticks of salted butter you can melt some in the microwave or on the stove top and then drizzle it over the popcorn and stir well to give it a more buttery flavor. This popcorn can taste pretty much like what you get in the theater if you have the right supplies.

Trader Joe’s Organic Popping Corn is a solid option for popcorn. You can make it in your saucepan or in a specialized popper if you want. The kernels pop up as expected and taste good. The price is also competitive even compared to many other non-organic popping corn options out there.