Special thanks to Kelly for helping us out with this review.

I bought a pineapple slicer from Aldi several years ago. It was sold under the now-discontinued Kitchen Living brand name, which used to be one of Aldi’s house brands that included a variety of kitchen gadgets, cookware, and serving ware. Aldi still sells the same pineapple slicer, but now it’s branded under the Crofton name, which includes all things kitchen- and food-prep-related. 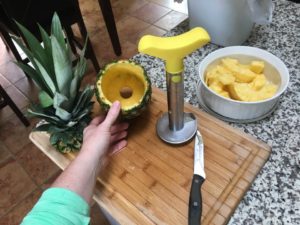 The box with instructions for the new Crofton Pineapple Slicer. Photo courtesy of Kelly Story. (Click to enlarge.)

Aldi’s pineapple slicer, back then and at the time of publication, sells for $4.99. Its features include:

The slicer is easy to use. The directions on the box currently in stores state:

There is only one difference between my older slicer and the one currently in stores: the newer one has measurement markings on the shaft that help you know when you’ve sliced all the way through the pineapple. My older slicer doesn’t have that feature, but it still seems to work fine.

Aldi’s slicer makes quick, easy work of cutting a pineapple, especially if you don’t have a lot of experience cutting pineapple or if you just want less hassle.

One downside to using this or any slicer is that if you don’t aim the slicer perfectly straight into the pineapple, you can end up with imperfect pineapple slices that contain some of the hard inner core or some of the brown outer covering. This has happened to me a few times, but mostly my slicer works well, and if I do get some of the core or outer covering in my pineapple slices, it’s easy to trim those bits off with a knife.

It’s also worth checking the outer shell after using this slicer, because sometimes, depending on the shape of your pineapple and how the slicer goes through it, you may be left with some good-sized edible pieces still on the outer shell. I don’t always have good pineapple still left on there, but it’s a good idea to check. Again, it’s simple to cut these sections off with a knife. They just won’t be in pretty spiral rings like the rest of your pineapple. (See photos below.) 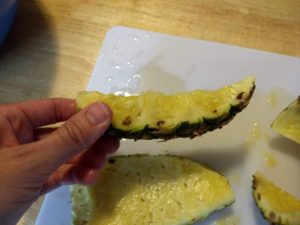 There is extra edible pineapple on this section of the peel after using my Aldi pineapple slicer. (Click to enlarge.) 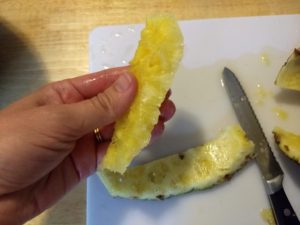 This is what I cut off the peel. It’s a good-sized piece of edible pineapple. Check for chunks of usable pineapple still on the peel after you’ve used your slicer. (Click to enlarge.)

After you use the pineapple slicer, you’ll need to remove the hard inner core from inside the slicer. I’ve found that the most effective way to do this is to insert a knife into the core while it’s in the slicer, and gently twist while pushing or pulling, and eventually the core will slide out. Just be careful not to cut your hands in the process. If you have a better and safer way to remove the core from the slicer, please leave a comment and let us know how you do it.

The ALDI Find (Special Buy) Crofton Pineapple Slicer is a handy way to quickly get peeled, cored, sliced pineapple rings. Make sure to line up the slicer carefully with the core before cutting into the pineapple so you get an accurate cut. It can be a bit difficult to remove the core from the inside of the slicer after cutting your pineapple; I insert a knife and carefully twist until it comes loose.