Years ago, I profiled some of the Regular Buy dental hygiene options at Aldi. It was a pretty sparse lineup. Most of it was made up of name brands with prices weren’t that great, and the few private label options that existed weren’t that special. Oh, and there wasn’t any dental floss.

For the most part, things haven’t changed all that much. The lineup is still pretty basic, it’s still dominated by name brands, and the Aldi versions aren’t all that special. Also, there still isn’t any dental floss.

However, I have seen one change. Back in those days, Aldi sold its own version of a standard tooothbrush, and it was about as basic as you can get: nondescript bristles on a stick. Since then, Aldi has dramatically revamped its toothbrush to look more like what name-brand toothbrushes look like. 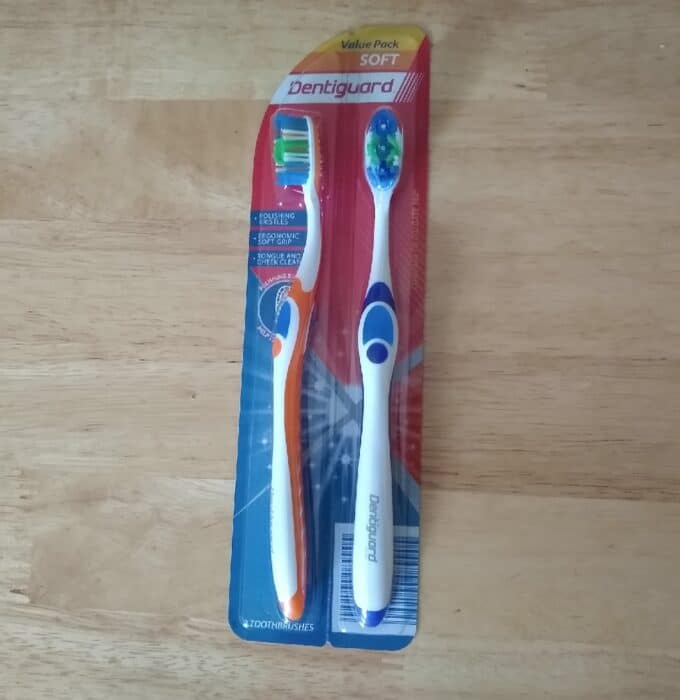 The Dentiguard Premium Toothbrush is a Regular Buy, which means you can find it in stores all the time. (Aldi also sometimes sells powered and rechargeable toothbrushes as Aldi Finds.) It comes in both soft and medium bristles; most experts recommend soft bristles for most people.

The Dentiguard comes in a 2-pack that retails, at the time of this post, for $2.59. That comes out to $1.29 a brush. You can find really basic toothbrushes for less than that (more on this in a moment) but in general this is as good of a price as I can find for a brush that has what this one does.

According to the packaging, the toothbrush is a product of Germany and has the following features: 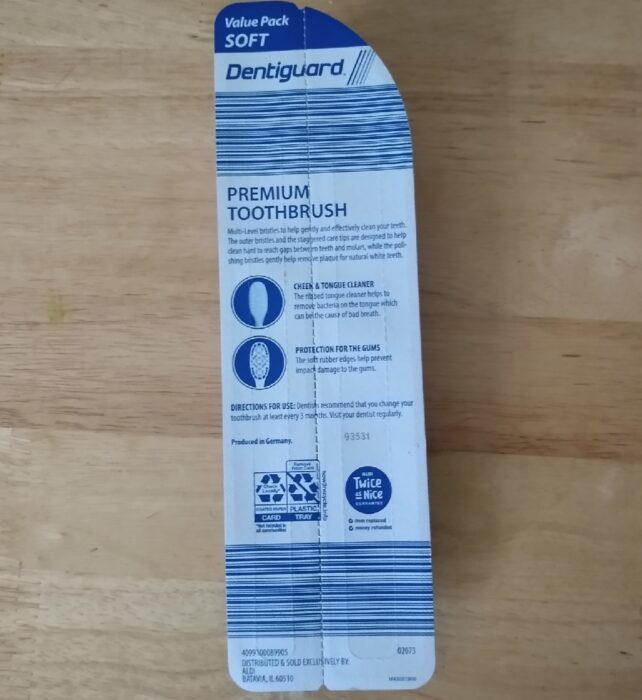 The back of the Dentiguard packaging. (Click to enlarge.)

The packaging also says “Compare to Colgate 360.” So we did. 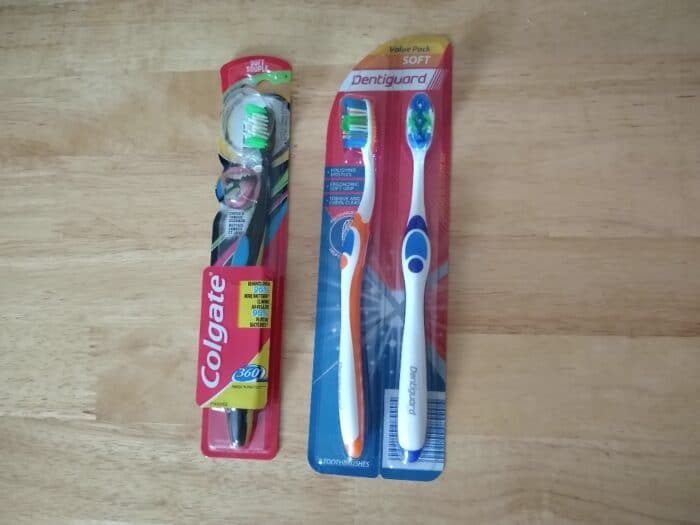 Colgate 360 at left, Dentiguard at right. (Click to enlarge.)

In terms of design, it’s safe to say that while the Dentiguard is similar to a Colgate 360, it’s not identical. 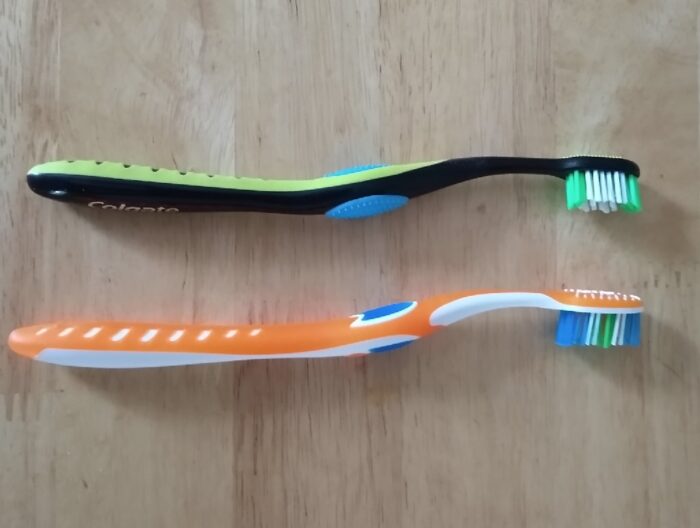 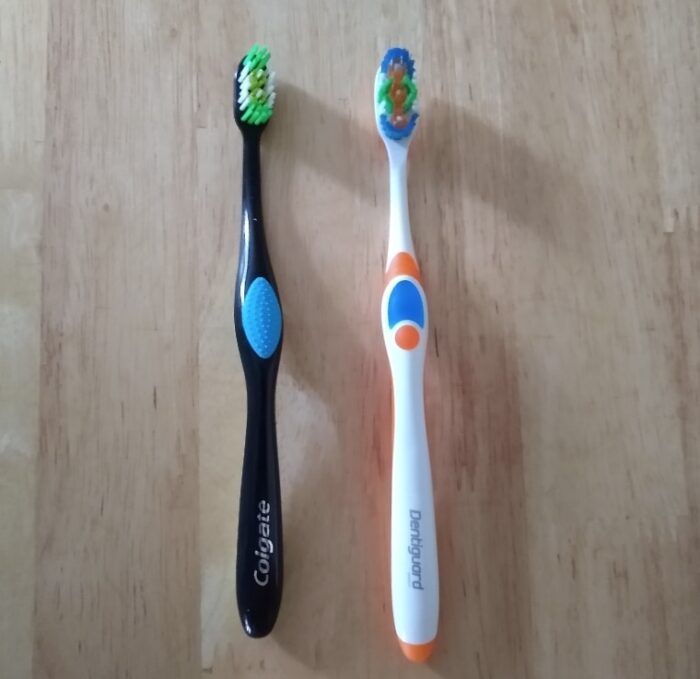 The most distinctive feature of both toothbrushes is the rubber-like tabs in the center of the brushes, arranged in a circular pattern. Colgate calls them “polishing cups.” The 360 we have has 2 cups for some reason, while Colgate 360 brushes that I see listed online have three. (The Dentiguard also has three.) According to the product listing for a 360, “Polishing Cups hold more toothpaste, for better stain removal than an ordinary Colgate flat-trim toothbrush.” 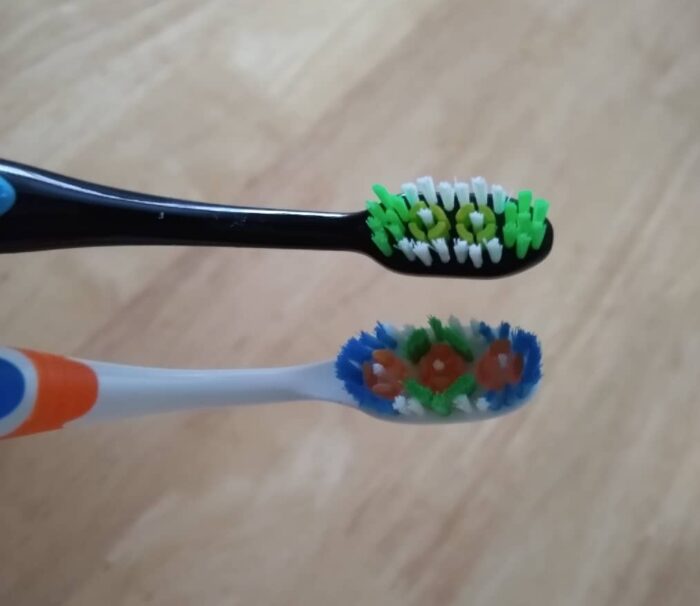 While the Colgate is a little more narrow than the Dentiguard, the two brushes feel similar in my mouth. The bristles are about the same, and while the tongue and cheek cleaners look different, they don’t feel as different as I thought they might. I haven’t done enough long-term testing to tell you how they perform in the eyes of the dentist, but overall the Dentiguard certainly appears to mimic the name brand here.

The Dentiguard Premium Toothbrush is a decent impersonation of a Colgate 360 toothbrush, and for less money. I think Aldi toothbrushes have come a long way in recent years and this toothbrush appears to be closer in design to name-brand toothbrushes than it once was.