FACT CHECK: Is Aldi Giving Away a Year of Free Groceries to People on Facebook? 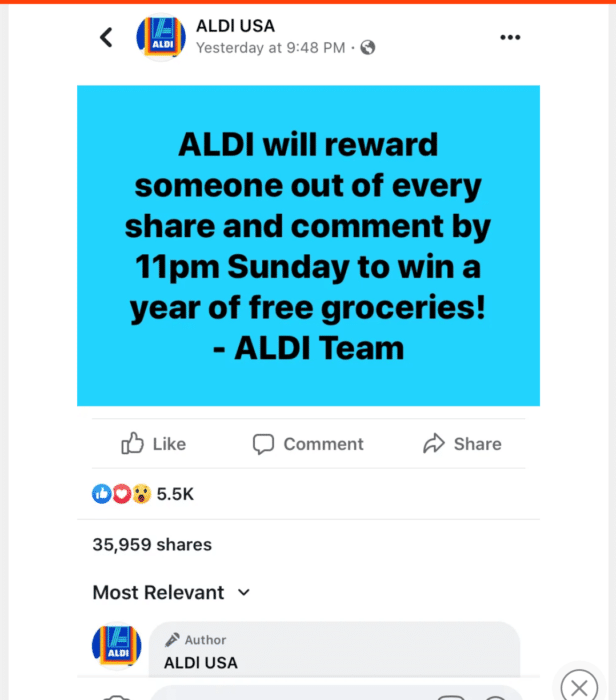 This post is false. Aldi is not giving away a year of free groceries.

Several things about the post are problematic, cluing us in that it is a scam.

The Facebook post in question is a scheme known as like farming, in which, according to the Better Business Bureau, scammers write posts designed to catch your attention and get many likes, comments, and shares. The posts often appeal to emotions (sick children, homeless animals, politics, a chance to win something big, etc.). As a post gets liked and shared, it gets seen by more people on Facebook and appears in more people’s newsfeeds. After a post gains a large audience, scammers often edit the post, adding something malicious such as a link to a website that downloads malware to your device. They may also strip the Facebook page’s original content and change its focus, using it to try to sell spammy products, or they might resell the page on the black market where buyers can spam you.

Snopes stated it has reached out to Aldi and will update if they receive more information about the false Facebook post.

Rachael is the Senior Editor for Aldi Reviewer. She enjoys reading, cooking, gardening, and collecting house plants when she isn't busy shopping at Aldi.
View all posts by Rachael →