EDITOR’S NOTE: In this post you’ll see the German grocer stylized as both Aldi and ALDI. You can read more on why that is here.

It’s no secret that Aldi has experienced phenomenal growth during the past several years, and that growth has resulted in an explosion of various social media fan groups, especially on Facebook. These Facebook groups are dedicated spaces for Aldi superfans to ask questions, find like-minded friends, and geek out about their favorite products from their favorite grocery store. Until now, all Aldi-related Facebook pages have been run by Aldi fans who are not employed by Aldi. They’re simply customers who like shopping at the grocery store and want to share their enthusiasm within an online community.

That all changed this week, when Aldi began actively promoting its own brand new Facebook group, run by Aldi. It’s called ALDI Insiders.

A screenshot of the ALDI Insiders Facebook group cover photo.

On October 25th, 2021, Aldi shared the photo below on its official Facebook page, ALDI USA (which is different than the new Facebook group), along with a link to the new group and the text: “Are you an avid ALDI fan? We’ve got just the Facebook Group for you! Take your fandom to the next level and become an ALDI Insider. Join to be in the know on everything from giveaways to special sneak peeks.” 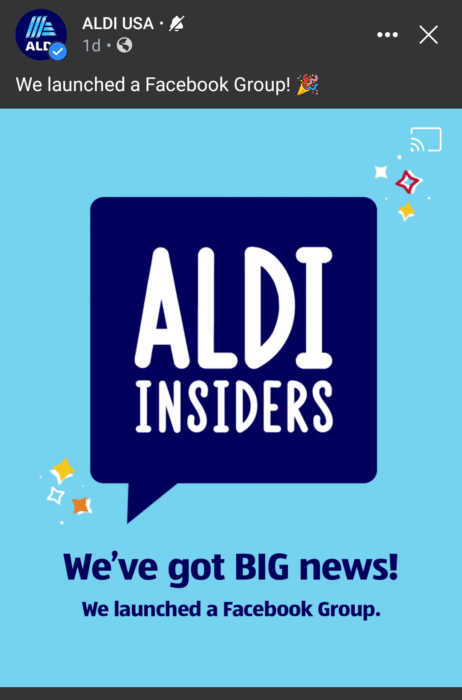 ALDI Insiders is a private group that Facebook users must request to join in order to view content or make posts. You can find the group by searching Facebook, or visit the ALDI USA Facebook page and look for a posted link.

When you request to join the ALDI Insiders group, you’ll be asked a series of simple confirmation questions, including a fun question about how often you shop at Aldi. Plus, you’ll have to check a box saying you agree to follow group rules (don’t be mean to people, don’t spam people or do self promotion, etc.). Also, by joining the group and posting in it, you agree to give Aldi permission to use your content that you post to the group, including photos.

The screenshot below is one of the posts you may see when you join the ALDI Insiders Facebook group. The text reads: “New level unlocked: ALDI Insider!

Here you’ll get a look behind the curtain into all things ALDI USA! Get ready for giveaways, exclusive sneak peeks, and a community of the most loyal fans.” 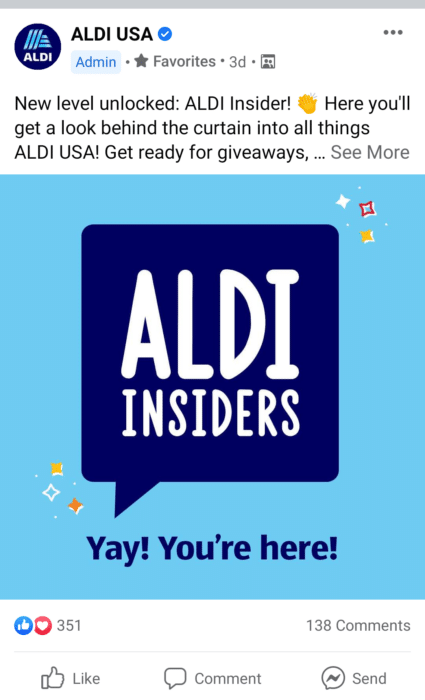 Aldi wasn’t kidding about the giveaways either. There’s currently a candle giveaway happening, which group members can enter to win by November 5th, 2021. These candles won’t be sold in stores, and they feature scents from popular Aldi fan-favorite products such as take and bake pizzas, barbecue kettle chips, sparkling water, and oatmilk. 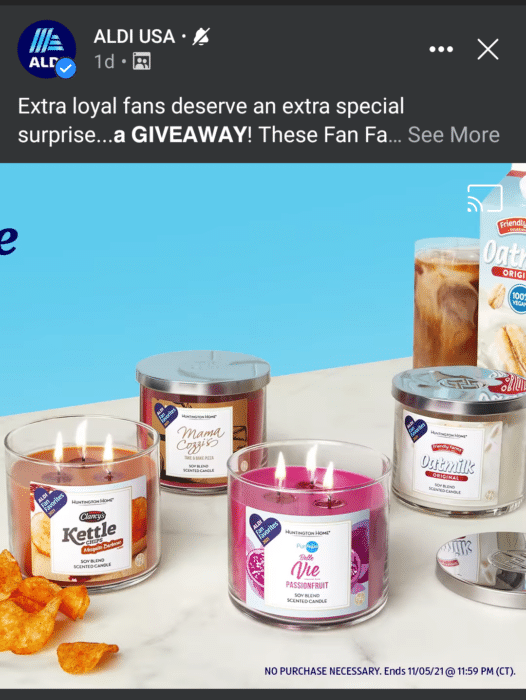 A screenshot of the ALDI Insiders candle giveaway, which ends November 5th, 2021.

So far, the new Aldi Facebook group is exploding with new members and posts. The posts range from photos of customers’ candle collections to seasonal décor to the latest frozen food Aldi Finds. We’ve also seen group members request that Aldi start carrying certain products or bring specific favorite products back to stores. At post time, to the best of our knowledge, we haven’t seen Aldi directly comment on members’ posts.

One thing is certain: we’ll be eagerly watching to see what Aldi does with its official Facebook group, especially regarding sneak peaks, insider tips, and more giveaways. Have fun, everyone!