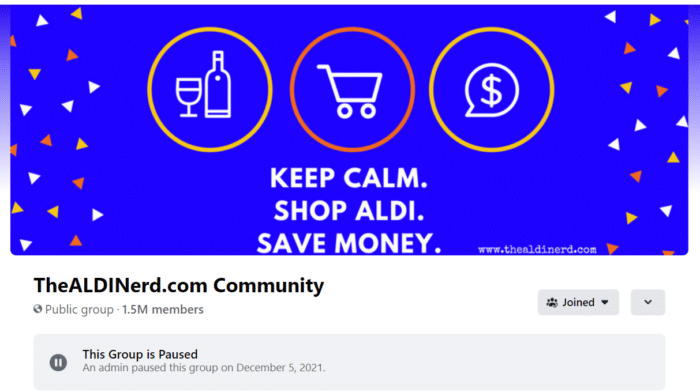 I’ve written in the past about the Aldi Superfan phenomenon, which has been a huge deal on social media. On places like Facebook and Instagram, millions of Aldi faithful have gathered in recent years to post photos, coin catchy slogans, and mostly just geek out about Aldi.

The biggest social media tribe belongs to a Facebook group created by the Aldi Nerd. Founded in June of 2016 — just a few weeks before this site, Aldi Reviewer, went live for the first time — TheALDINerd.com Community boasts just over 1.5 million members, making it the largest and most active Aldi-centric group on any social media platform that we know of. Aside from popularizing the idea of an Aldi Nerd, the group also is the first place fans started asking where the Ranch dressing was as a catchphrase for finding other Nerds. It’s a cult among cults.

On December 5th, 2021, TheALDINerd.com Community paused operations on Facebook. Now, the Nerd admins often do pause the group during major holidays and on other select occasions to give its army of admins and moderators a break, but those pauses always come with an announcement. This pause came with no announcement or obvious other reason, and it has stretched now into more than two weeks.

A group that is paused no longer accepts posts or reactions of any kind. Members can’t like anything or comment on anything. It’s effectively silent.

To be fair, we’re no strangers to the challenges of running Facebook groups; we ran one ourselves for a while but ultimately decided, for a variety of reasons, to pause it. Still, we can’t help but wonder why TheALDINerd.com Community is paused, or if this is a temporary or permanent development. If permanent, it would mark a titanic shift in the Aldi fan universe.

The founder of the Aldi Nerd, Diane, has contributed on this site in the past, so we reached out to her both via email and through social media to find out what was up. As of press time we haven’t yet heard back, but we’ll update this piece if we do.

In the meantime, as long as TheALDINerd.com Community is paused, the torch for the largest Aldi-centric group on Facebook passes to the ALDI Aisle of Shame Community, which as of now has 1.1 million members. Aldi also recently launched a Facebook of its own, ALDI Insiders.