In case it isn’t obvious, I like hot dogs. The problem with hot dogs, though, is that they aren’t good for you. Not remotely. They are high in nitrates, sodium, and just about everything that people shouldn’t be eating.

The Aldi Fit & Active line is the grocer’s attempt to provide healthier food products, and one of them is a turkey version of a hot dog. So the questions are: 1) is it significantly better for you than a normal hot dog and 2) does it taste good enough to be worth buying? 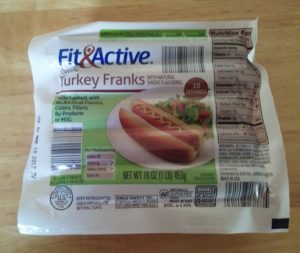 The Fit & Active Classic Turkey Franks come ten to a pack. (This is a minor annoyance, since hot dog buns typically come in packs of eight.) There are actually cooking instructions on the package — boil for 4-5 minutes, it says — but given that hot dogs are about the easiest thing in the world to cook, you probably won’t notice. Like any other franks, you can grill them if you want, or simply boil them in a small saucepan if you need to. I recommend grilling when possible.

The packaging lists these turkey franks as being about 45 grams per dog. That’s a little smaller than other franks I’ve purchased from Aldi — the regular Aldi hot dogs are 54 grams per dog — but they also come with 2 more dogs per pack than the other Aldi hot dog options. Even adjusting for the smaller serving size, though, the turkey franks are noticeably lower in calories, sodium, and fat than their pork and beef counterparts. There’s not much question that they are, on balance, a good deal healthier for you than a regular hot dog.

As for taste: they were better than I anticipated. I ate one with ketchup, mustard, and relish, and it tasted about like any other normal hot dog I’ve ever eaten. I would add that I think beef franks are superior to normal hot dogs, but as far as normal hot dogs go, this works well. And I didn’t really notice the size difference.

Fit & Active Classic Turkey Franks are a worthy substitute for a traditional hot dog. To me, they taste about like a normal pork dog, and with a much lower amount of the things that make hot dogs unhealthy. They probably won’t beat a true beef frank, but among the normal hot dog line these stack up very nicely. Recommended.