There are many things I associate with being a kid. Running through the backyard. Camping trips with my parents. Riding the school bus. Clothes that I thought were cool at the time but now look hideous.

And kid foods. You know, the stuff they sell that parents buy for kids. Things like Kool-Aid or Pixy Stix. Mostly stuff that’s bad for you. Stuff that your mom knew was bad for you, but she may have let you have sometimes anyway. (If you ate your vegetables, that is.)

Then there’s chocolate milk. It occupied a special place, because technically it was good for you (unlike candy), but it also wasn’t, which made it both something mom could justify giving more often and something a kid could consider a junk food even though it was milk. 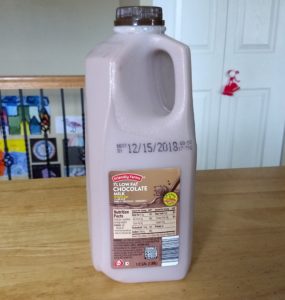 Friendly Farms Chocolate Milk is an Aldi Regular Buy, which means it’s in the grocer year-round. It can be found in the refrigerated section in half-gallon jugs. We purchased the chocolate milk as part of our Instacart test, to the tune of $1.79, or about 2.8 cents an ounce. (A helpful commenter on our white milk post pointed out that you can use the numbers on your jug to determine the supplier, which may well be the same supplier of milk sold at other local stores.) Our local grocer sells both name-brand and store-brand chocolate milk on Instacart, but both cost more per ounce, even when purchased in full gallon jugs. On the other hand, our local Walmart sells Great Value half and full gallons of 1% milk for less, so you might want to do some price comparison if you shop at multiple places.

On the downside, Aldi only currently sells 1% chocolate milk. This is unfortunate, since there is some evidence that whole milk may not be as bad as we once thought (and possibly even helpful in reducing the risk of diabetes and obesity) … and because Aldi does sell whole white milk. It would have been nice to be able to get whole chocolate milk at Aldi, which I think has a richer, fuller flavor.

Still, as 1% chocolate milk goes, this is pretty good stuff. It has just the right amount of chocolate and is a tasty drink by itself or with cookies. It’s also not a bad way to bring a little milk into your diet if you don’t like regular white milk, if you are of the persuasion that the vitamins and minerals in milk are worthwhile. (This milk has significant amounts of Vitamin A, Vitamin D, and Calcium, plus a few other things.)

I’d prefer whole chocolate milk personally, but Aldi’s lone chocolate milk option — Friendly Farms 1% Low Fat Chocolate Milk — still does a pretty good job. If you do want the whole stuff, you’ll have to look elsewhere for now, but if you’re fine with 1%, this is a solid option. In our area, it was cheaper even than the full gallons sold at other nearby stores.