I’ve seen online chatter among Aldi fans about the Kerrygold Pure Irish Butter sold in Aldi stores. This butter is imported from Ireland and is also available in other regular grocery stores in my area, so it is not exclusive to Aldi. I picked up a small 8 oz. container for $3.59 when I was at Aldi recently so my family could give it a try. 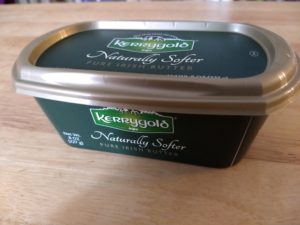 An 8-oz. plastic container of Kerrygold Naturally Softer butter for $3.59 at the time of writing. (Click to enlarge.)

I later discovered that other Aldi stores in my area actually sell Kerrygold butter in a stick form instead of, or in addition to, a plastic container. The stick form is shown in the picture below, and it sold for $2.85 for 8 oz. (cheaper than the Naturally Soft version in the plastic container) at the time of writing. 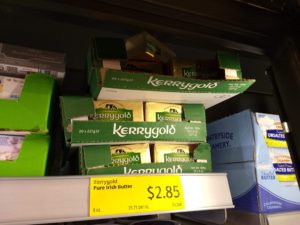 Eight-ounce sticks of Kerrygold butter for $2.85 at the time of writing. (Click to enlarge.)

For this review, though, I am looking at the Kerrygold butter sold in the small plastic tub.

Most of the online discussion I’ve seen lately centers on whether Aldi is going to continue to sell Kerrygold butter, and some people have seen an Aldi store-brand version of Irish butter under the Countryside Creamery label that could perhaps replace Kerrygold on the shelves. Kerrygold Pure Irish Butter appears to be a Regular Buy in my local Aldi stores, meaning it is available all the time. Other Aldi bloggers say it’s a Seasonal Favorite that is in stores for a few months at a time. I guess time will tell whether Kerrygold stays around at Aldi stores.

The plastic container my Kerrygold Pure Irish Butter came in claims it is “naturally softer” and that it’s made with milk from grass-fed cows. Some bloggers question whether the butter has air whipped into it to make it softer.

Ingredients are: pasteurized cream and salt. A 1-tablespoon serving contains 100 calories, 7 grams of saturated fat, 40 mg of cholesterol, 65 mg of sodium, 0 carbs and 0 grams of protein.

European butters generally contain a slightly higher level of butterfat compared to butter produced in the U.S. However, a foil seal inside my container of Kerrygold butter indicated that it has developed a lower-fat product. Both the Kerrygold and Aldi’s Regular Buy Countryside Creamery Sweet Cream Butter (a salted stick butter) contain 11 grams of total fat and 7 grams of saturated fat.

Where does Kerrygold butter come from?

Kerrygold is one of the consumer brands marketed and sold by Ornua, a dairy co-operative that, according to its website, markets and sells dairy products on behalf of its members — Ireland’s dairy processors and Irish farmers. It is the largest exporter of Irish dairy products, with a presence in 110 countries. It has 14 production facilities and sales and marketing teams around the world.

Ornua’s website states it seeks to promote and support Ireland’s grass-fed family farms. It has set goals for sustainable operations and to reduce its supply chain’s carbon footprint as well as reducing water consumption and waste and promoting efficiency. It also seeks to source environmentally and socially sustainable products, packaging, and ingredients. Its website has a statement indicating the co-operative’s opposition to the practice of slavery and human trafficking.

Ornua is a large operation, but there seems to be a lot to like if you value sustainable farming and human rights. Some food bloggers have expressed concerns about whether Kerrygold’s cows receive some supplemental feed during certain times of the year and whether any of that feed is GMO. Those are things you’ll have to evaluate and decide on for yourself. Ultimately, if you’re a dedicated natural food fan, you’re probably going to be happier buying butter or dairy products directly from a local farmer or farmers market.

How does it taste?

That debate aside, how does Kerrygold butter taste? 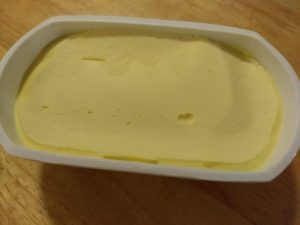 Our Kerrygold butter upon opening the container for the first time. (Click to enlarge.)

My family ate the Kerrygold butter on Hawaiian rolls and on homemade bread for dinner, as well as on English muffins and toast for breakfast. We also ate it with French toast. We liked the taste, and it tastes pretty similar to other butters on the market except that we noticed it tastes slightly less salty than other butters we’ve eaten. A comparison of the nutrition information on the Kerrygold versus other Aldi butters and spreads in our fridge confirmed this. Here are the sodium amounts per 1-tablespoon serving:

It’s worth adding that Kerrygold Original Pure Irish Butter, the kind found in stick form, has 100 mg of sodium per tablespoon.

(If you don’t want any salt in your butter, you can use Aldi’s Countryside Creamery Sweet Cream Unsalted Butter, which has 0 mg of sodium in a 1-tablespoon serving.)

Kerrygold butter is advertised as softer, and we found it to be a bit softer than traditional stick butter when it is straight out of the refrigerator, but it still has the potential to tear up your bread compared to butter alternatives such as Aldi’s Countryside Creamery Homestyle Spread.

Kerrygold Pure Irish Butter is a good option at Aldi if you’re a fan of international foods or if you value sustainable farming, grass-fed cows, environmentally friendly farming practices, and opposition to human trafficking and slavery. It’s not the same as buying directly from a local farmer, but it’s something. It costs more money, but Kerrygold butter also is lower in sodium than some other butters and spreads. Some customers say Kerrygold butter is a Seasonal Favorite only available for a few months out of the year at Aldi, but it seems to be available all the time as a Regular Buy at my local Aldi stores. It’s also sold at other large traditional grocery stores.