EDITOR’S NOTE: Read our roundup of some of the takeout-style food options at Aldi here.

Aldi sells a variety of Asian-inspired dishes, with some being better imitations of takeout-style food than others. My family, for instance, loves Aldi’s General Tso’s chicken and orange chicken. But to serve it right, you have to have other side dishes such as rice, pot stickers, lo mein, crab rangoon, or classic egg rolls. 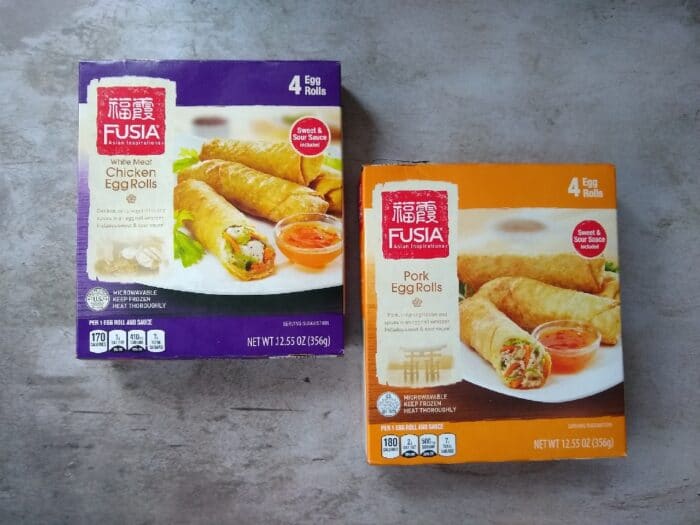 Fusia Asian Inspirations Chicken Egg Rolls or Pork Egg Rolls cost $2.39 for a 12.55-ounce box at the time of publication. Each box has four egg rolls, with sweet and sour sauce packets included, which comes out to about 60 cents per egg roll.

These are a Regular Buy, which means you can find them all year at Aldi. The boxes describe them as either pork or white meat chicken with “crisp vegetables and spices in an egg roll wrapper.”

If you’re avoiding allergens, both varieties of these egg rolls have soy and wheat.

These are sold frozen and should be kept frozen until ready to cook. They can be baked, microwaved, or fried. Either way, they should be heated to an internal temperature of 165 degrees.

To microwave, remove the egg rolls and sauce packet from their plastic film. Place the egg rolls on a microwave-safe plate and heat one frozen egg roll on high for 1 minute, adding 45 seconds for each additional egg roll. Let stand 1-2 minutes after cooking.

To fry, preheat the oil in the deep fryer to 350 degrees. Remove the egg rolls and sauce packet from their plastic film. Fry the egg rolls for 7-8 minutes. Let stand 1-2 minutes after cooking. 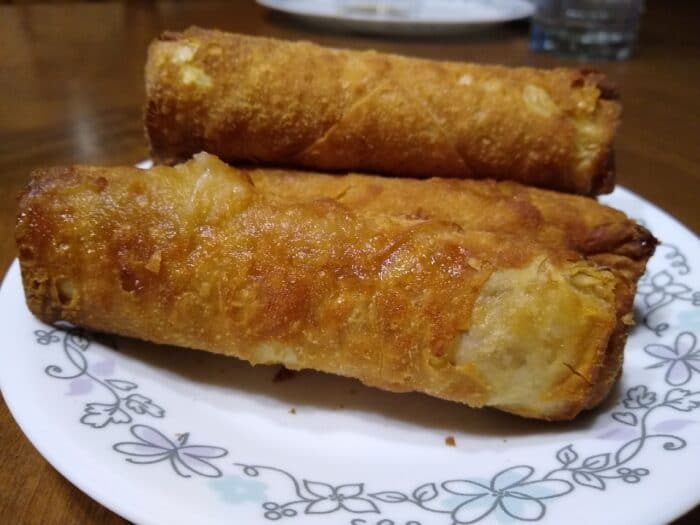 Egg rolls after going through the air fryer.

I used to bake these in a conventional oven, but after we bought this air fryer a few years ago, I now prepare them in the air fryer every time. That leaves my oven free for things like General Tso’s chicken or orange chicken. To air fry these, put them in at 400 degrees for 10 minutes, then shake and cook them for an additional 8-10 minutes. They come out crispy every time. 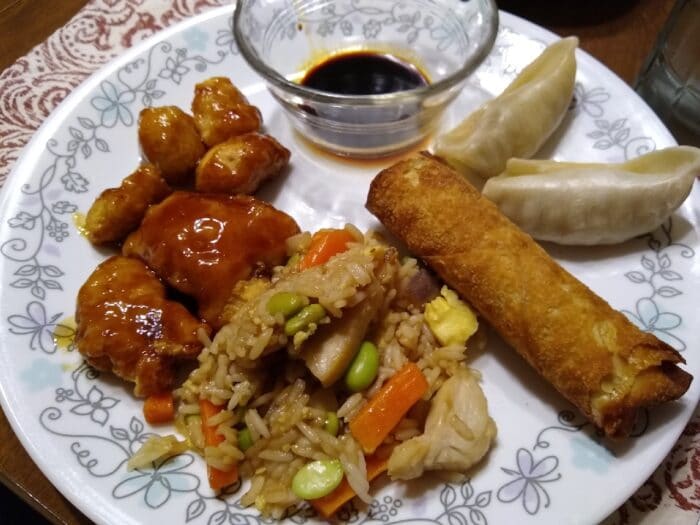 An egg roll with General Tso’s chicken, chicken fried rice, and pot stickers, all from Aldi.

These aren’t as good as restaurant egg rolls — and it’s not easy to find any kind of grocery store egg rolls that are as good as takeout. These are all right but nothing really special. We like to dip them in soy sauce, and one family member dips them in Ranch, which makes them taste surprisingly good.

Keep reading for nutrition information on each egg roll variety. 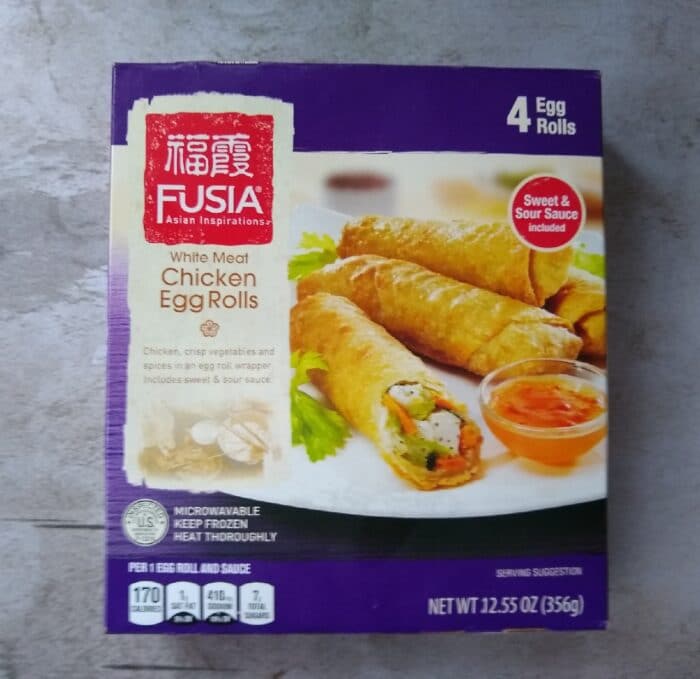 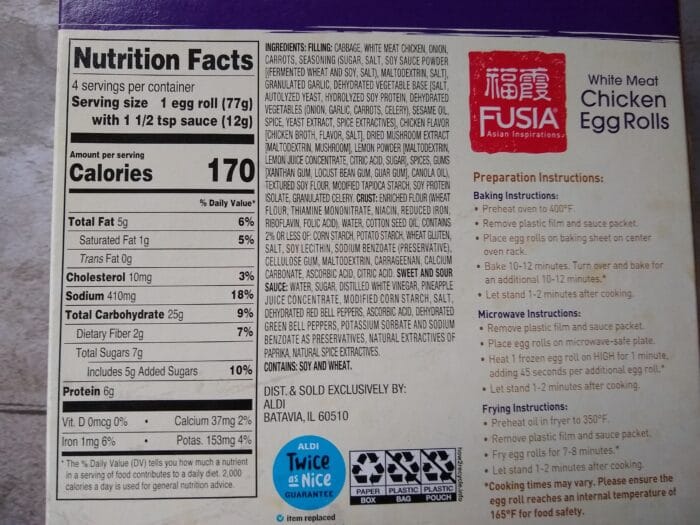 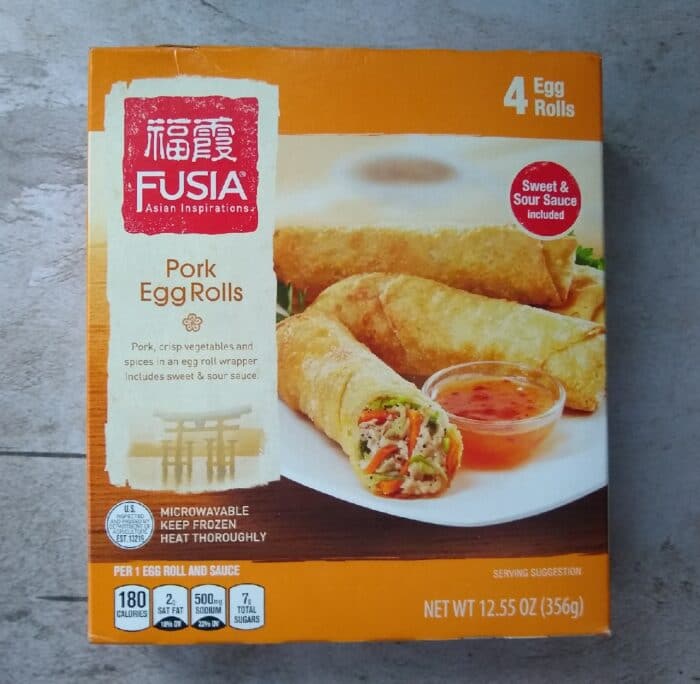 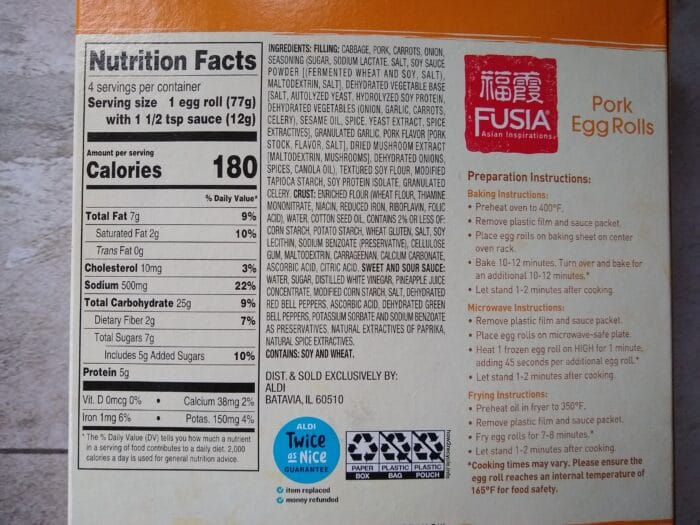 Fusia Asian Inspirations Chicken Egg Rolls and Pork Egg Rolls can be paired with some of Aldi’s other takeout-style foods such as General Tso’s chicken or orange chicken. They’re not as good as what you’d get from a restaurant, but they’re not terrible either.