Chinese-American food has a regular spot in meal rotations in my house. Sometimes we get it from a takeout restaurant nearby, but often we make our own using meals and kits purchased at Aldi. While grocery store takeout isn’t the same as getting it from a restaurant, it’s not bad and it helps us keep a balanced budget.

For a main course, my family likes Aldi’s General Tso’s chicken and mandarin orange chicken, and we usually pick up sides such as egg rolls, fried rice, or noodles. Aldi sells some lo mein noodles with chicken and veggies in the freezer section that work well as a side or can make a complete meal. 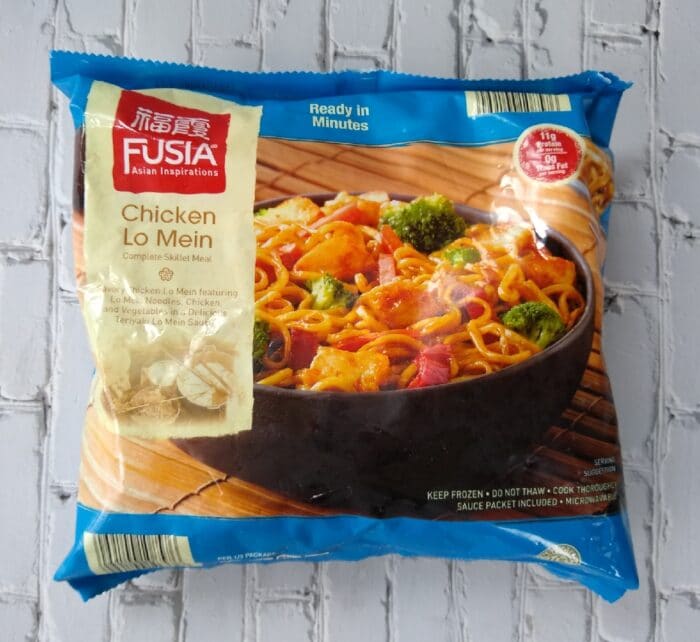 This is a Regular Buy, which means you can find it at Aldi all year.

If you’re avoiding allergens, this contains wheat and soy.

It can be prepared in a skillet (the preferred method) or in the microwave.

To heat in the skillet, heat one tablespoon of vegetable oil in a large skillet or wok over high heat. Add chicken, vegetables, and noodles. Cover and cook for 6-7 minutes. Stir occasionally. Once heated through, add contents of the sauce packet and stir until combined and hot, about 30 seconds.

I always make this in a skillet. It often takes a few minutes longer than the instructions state to thoroughly heat the noodles, veggies, and chicken. I’d recommend allotting about 10-12 minutes rather than 6-7. 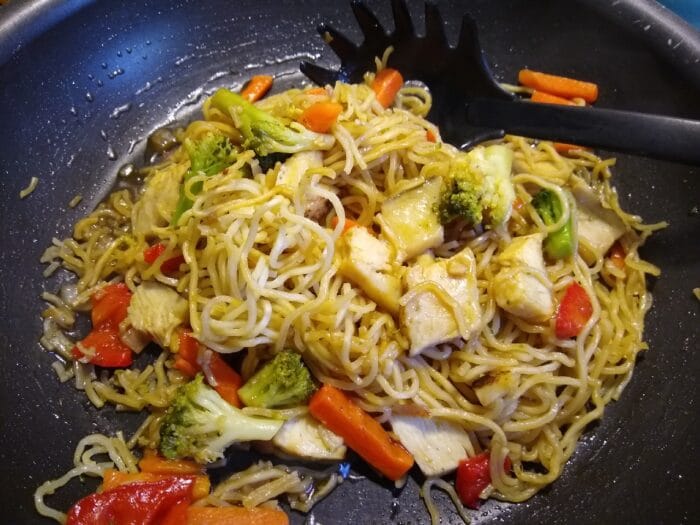 I wonder if Aldi has reformulated this lo mein dish because when I recently made it, I was surprised at how good it tasted. The noodles have a texture similar to Ramen, and there are a lot of noodles, which I appreciate after trying other dishes like this that have hardly any noodles or rice and are mostly a bunch of broccoli stems and carrots. This has plenty of noodles.

The sauce soaks into the noodles, so while the noodles remind me of Ramen, that’s where the similarity ends. There is plenty of flavor in this meal, though. 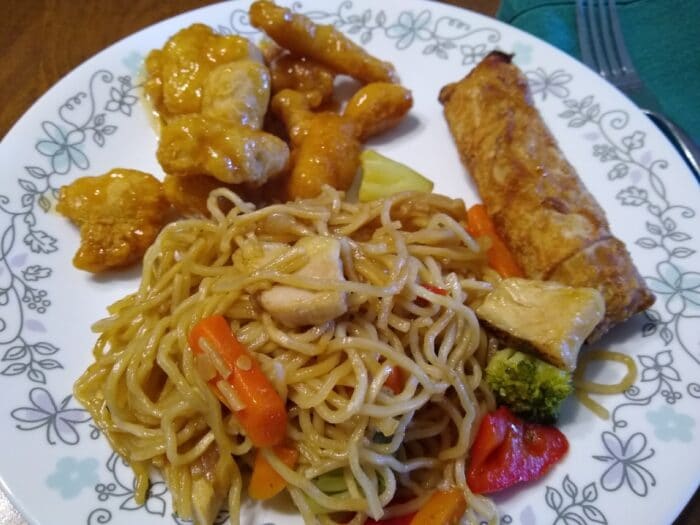 Some of the veggie chunks were a little large, including some broccoli pieces and one giant piece of red bell pepper, so I cut those into smaller pieces in the skillet before serving. This would benefit from having more broccoli florets and fewer stems, but that’s a common complaint with dishes like this.

Some of my family thought this was just okay, but I liked it so much I’ll definitely buy it again.

Fusia Asian Inspirations Chicken Lo Mein features a mix of noodles, chicken strips, and veggies in teriyaki sauce. It tastes great and has a generous amount of noodles. It works well as a side dish served alongside other Chinese-American favorites, and it also has everything you need to make a complete meal on its own.